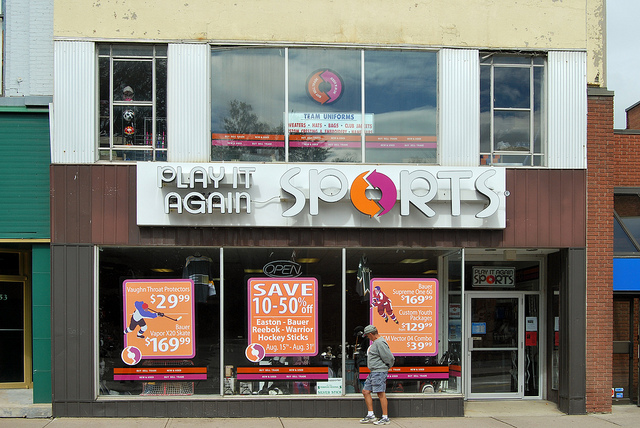 This annual list of the best sports equipment and apparel franchises was revised and updated on June 15, 2022.

The American public has had a long-standing love affair with professional sports, mostly around football, baseball, basketball, and ice hockey, though soccer has been making big gains in popularity in recent years. Many people enjoy playing these sports throughout childhood and adulthood, and carry on participating throughout their lives, whether playing in their spare time or watching games while wearing team shirts. They even pass the passion down to their children, maintaining the market. Every sport has its particular equipment and apparel needs, and entrepreneurs can capitalize on this with sports equipment and apparel franchises.


The sale of sporting goods is a huge sector, worth $45 billion per year in the US. Up to the beginning of 2020, the sector had seen a period of significant growth, thanks to rising disposable incomes and increased participation in sports. Greater awareness of the benefits and pleasures of healthy living have boosted the bottom line for businesses associated, whether directly or indirectly, with exercise and better diets.

The COVID-19 pandemic initially caused concerns for the sporting goods industry. People weren’t out and shopping, they weren’t able to take part in team games, and many had reduced disposable income. These factors could easily have damaged the industry.

Instead, the sporting goods stores industry surged by 16.8% in 2020. Though some stores had to temporarily close, and many furloughed or permanently laid off workers, others remained open or were quick in getting back to business. A rise in demand for in-home exercise equipment boosted profits, and sportswear performed better than other areas of the clothing market, as millions of people took on individual exercise or home workout routines to stay in shape while working from home.

For some sporting goods stores, the biggest boost to revenues came from a more controversial source: guns. Selling firearms was often the reason why stores were allowed to stay open when other sorts of businesses shut down. The anxieties created by uncertain times led people to seek security in self-defense, and firearms sales rose. It’s hard to tell how this will shape the future of these stores, as the US once again grapples with the issue of gun violence and gun control. For some entrepreneurs, it may be a part of the sporting goods business that they want to avoid.

Another effect of the pandemic has been to accelerate the shift toward online shopping, as a cheap and convenient alternative to stores. To thrive in this environment, stores of any sort need to demonstrate the added value they can provide, whether that’s the expert advice of sales staff, the opportunity to examine the goods before purchase, or the chance to try them on for size, fit, and comfort before buying, something that’s not available over the internet. Providing those benefits, alongside an environment that people enjoy shopping in, is vital to the success of franchises in this sector.


The sports equipment and apparel industry has been forecast to grow by 5.7% per year over the next few years, as the economy recovers and previous trends toward exercise and healthy living return. The industry also benefits from fashion trends featuring sportswear, so that it isn’t just catering to health-conscious consumers. If even a portion of the predicted growth appears, then things are looking up for sports equipment and apparel franchises, as long as they can lure consumers away from online shopping.

The Top Sports Equipment and Apparel Franchises of 2022

Play It Again Sports solves a major problem with families whose children are involved in multiple sports – what to do with the equipment they outgrow each year. They can sell it (outright or on consignment for higher-end items) or get trade-in credit towards their next round of equipment at Play It Again Sports.

Each location specializes in buying and selling gently-used sports equipment for all kinds of sports, including baseball, soccer, ice hockey, field hockey, football, fitness equipment, weight lifting, snowboarding, skiing, skateboarding, golf, disc golf, water sports, wrestling, racquet sports, inline skating, and lacrosse. The mix of what’s available in any given location depends on what sports are played in that area.

This chain is part of the Winmark family of franchise brands (Once Upon A Child, Plato’s Closet, Music Go Round, and Style Encore), all of which resell used items. Founded by Martha Morris in Ohio in 1983 and franchising since 1988, the number of locations has been declining in recent years from 319 in 2012 to the current total of 274 (down from the previously reported total of 280), of which none are company-owned and 35 are located outside the US.

Fleet Feet has been around for a surprisingly long time given that running wasn’t all that popular back in the 1970s. The chain’s specialty niche is running shoes, and it prides itself on taking the time to make sure the foot measurements they take for customers are as accurate as possible. The company even does a gait analysis of customers as they run with the ultimate goals of ensuring they get the best shoe and the best fit possible.

Founded by best friends Sally Edwards and Elizabeth Jansen in Sacramento, California in 1976 and franchising since 1978, the number of locations has grown in recent years from 98 in 2012 to the last known reported total of 179 in 2019, of which 29 were company-owned and all were located in the US.

Destination Athlete occupies the unique niche of services and products specifically for a community’s given mix of youth sports leagues and high school teams. But more than just equipment and uniforms, it has a whole program called Complete Athlete 360 for customized guidance and resources “from training to trophies” for teams, coaches, athletic department professionals, and administrators to really make the most of sports in their organization. This is a level of support that goes way above and beyond what many communities are used to, and it makes a huge difference in team success and safety.

Founded in 2008 and franchising since that same year, the number of locations has started moving up rapidly in the last few years and currently stands at 173 (up from the previously reported total of 139), of which none are company-owned and all are located in the US.

Soccer Post calls itself “America’s Soccer Store” and claims to be the largest chain of retail soccer stores in the US. Brand names carried include Nike, Puma, Adidas, and New Balance.

Founded in 1978 and franchising since 1991, the number of locations has declined since reaching a peak of 34 in 2017 to the current total of 26, of which four are company-owned and all are located in the US.