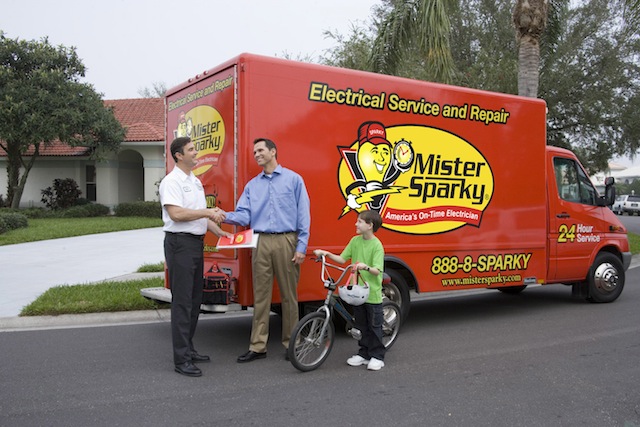 13 Things You Need to Know About the Mister Sparky Franchise

1.  In recent years, there has been widespread national coverage about a lack of skilled workers in the trades, but Direct Energy’s family of home services companies is tackling the problem head on. Instead of seeking potential employees with years of experience, the parent company of Mister Sparky, One Hour Heating & Air Conditioning, and Benjamin Franklin Plumbing, has decided to find willing applicants with great attitudes and train them with a standardized program.

3.  David Borowski, technical director at Success Academy, said, “This program gives the knowledge and online resources for locations across the country to hire for character and train technicians from day one. We like to call this option ‘Career in a Year.’ This is a flexible, self-paced curriculum that can help general managers within our network with recruitment, retention, reducing callbacks, and providing technical training.”

4.  In addition to providing courses from beginner to expert levels, technical skills can also be tested prior to hiring an experienced technician. This will allow the hiring manager the opportunity to understand each applicant’s skill level, and then assign technical training as needed once they are hired. Technical training is also available for existing team members who want to improve their skill set. Additionally, training can be targeted according to specific challenges or situations a technician may encounter.

5.  Borowski added, “Our customized trade-specific curriculum, delivery system, on-the-job training, mentorships and our in-house platform of communications training is the perfect way to attract and retain talent, where knowledge equals earning power. This has opened an incredible opportunity to join the ranks of field talent routinely reaching incomes of $75,000+ in the first three to five years with no college debt.”

Included on Entrepreneur Magazine’s Best of the Best Franchises List


6.  On Small Business Week at the beginning of May 2017, Mister Sparky announced that it and fellow Direct Energy brand, One Hour Air Conditioning & Heating, were both included on Entrepreneur magazine’s Best of the Best Franchises list. The list recognized the 105 companies that ranked at the top of their industry categories in Entrepreneur’s 2017 Franchise 500 ranking.

7.  Mark Baker, president of franchise, Direct Energy, said, “Investing in our franchise brands obviously has great benefits. Our growth trajectory for both One Hour and Mister Sparky reflects what we see in the Best of the Best Franchises list, and we aim to continue significant growth in the future. As an industry leader, it is very fulfilling to have this external validation about the value of our brands.”

Providing Safety Tips to Customers During the Holiday Season

8.  Mister Sparky often provides various safety tips to its customers during the year and this past holiday season (2017), the brand shared simple safety tips for winter decorations and heating devices. The brand stressed the importance of following proper precautions when setting up holiday decorations.

9.  Some of Mister Sparky’s suggestions included using wooden or fiberglass ladders because metal ladders conduct electricity; and making sure not to run extension cords, wires, or strings of lights across driveways, sidewalks, stairs, or anywhere they could present a tripping hazard. Mister Sparky also said to look for space heaters that had appropriate safety features and were the right size for the space a customer wants heated.

10.  Lastly, Mister Sparky reminded customers that during the holiday season, everything from decorations, winter storms, and candles contribute to an increased risk of fire. Customers were encouraged to install carbon monoxide detectors if they didn’t already have them and to make sure their smoke detectors had new batteries.

11.  Mister Sparky was founded in 1996 by Patrick Kennedy in Atlanta, Georgia. The company is the largest residential electrical service and repair company in the eastern United States and one of the biggest in North America overall. Kennedy named the company Mister Sparky because “sparky” or “sparks” is commonly used to refer to electricians in Kennedy’s native Ireland.

13.  Mister Sparky has been franchising since 2006, but it did not rank on Entrepreneur’s 2018
Franchise 500 list, although it has ranked in the past.

Tier 4:  4 or More Franchised Business Territories Owned by Franchisees in This Tier

Next post: How Much Is a Units Moving and Portable Storage Franchise? (Detailed Franchise Costs)