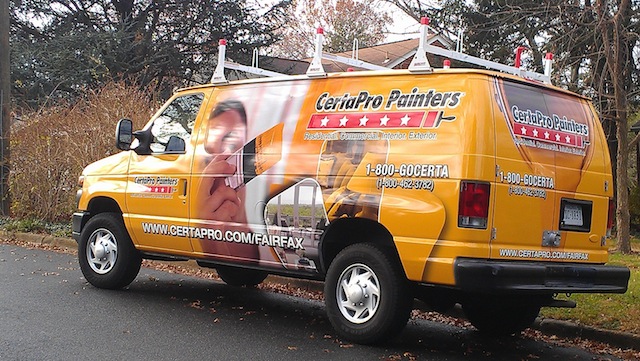 11 Things You Need to Know About the CertaPro Painters Franchise

1.  Over the summer of 2017, CertaPro Painters announced that Scott and Jamie McIntosh of Milton, Ontario in Canada were the winners of the brand’s first ever Paintcation Sweepstakes. The contest, which concluded in June of 2016, was launched as part of CertaPro’s “We Do Painting, You Do Life” campaign. The McIntoshs were awarded an $8,000 travel voucher for a vacation anywhere – the family chose Turks and Caicos Beaches resort.

2.  Additionally, their home’s exterior was painted by their local CertaPro Painters of Oakville/Burlington, Ontario. The family worked with Anne Crawford, a local design consultant, to choose the best Sherwin Williams color for their house. According to Scott McIntosh, “Thanks to Anne, CertaPro Painters and Sherwin Williams, our dull looking house was turned into the brightest and newest looking home on the street. So many neighbors are asking us about it and have even asked us to get a quote from CertaPro Painters franchisees Mark and Carmen Tunks.”

New Location Opened by Family Looking for a New Start

3.  One of CertaPro Painters’ newest franchises was opened in July 2017 by John Fecile and his wife Kate in Parkesburg, Pennsylvania. The Feciles decided to become business owners as a way for their family to start a new life after one of their children, Michael, died in 2015. John, Kate, and their other four children had been providing 24-hour care to Michael for years after an accident left him confined to his bed and unable to speak. John continued to work in the insurance industry while caring for Michael, but took time off after his son’s death. At that time, John realized that he wanted to work for himself and began researching franchises.

4.  John and his wife met with a franchise consultant and of the four options presented, they chose CertaPro Painters. John Fecile said, “In the end I chose them because of that emphasis on exceptional customer service. They’ve made investments in everybody in the organization, from office assistants to sales associates to the painters.” The Feciles also like that CertaPro Painters enables them to contribute more directly to their community.

5.  In an interview with CertaPro, Fecile said that his business had exceeded revenue projections and customer satisfaction percentages in its first six months of operation. He added, “We expect to have a $3 million painting company in five years. We would like to grow our business to include new territories as they become available.”

6.   CertaPro Painters continues to seek potential franchisees throughout the United States and Canada. The brand says that it is looking for business professionals who have both the skill and will to build something for themselves. Potential franchisees should also have the ability to set goals and the determination to achieve them. Seasoned business people with a desire to build teams and motivate others are welcome to apply for the CertaPro franchise program.

9.  The current president and CEO of CertaPro Painters is Rich Wilson, who took over College Pro Painters in the 1990s. Wilson expanded that company throughout Canada and the United States. In 2003, Chase invited Wilson to CertaPro Painters to help grow the franchise. Chase is now the CEO of FirstService Brands.

10.  Over the years, CertaPro Painters has become the largest residential painting contractor in North America, with over 350 locations across the U.S. and Canada.