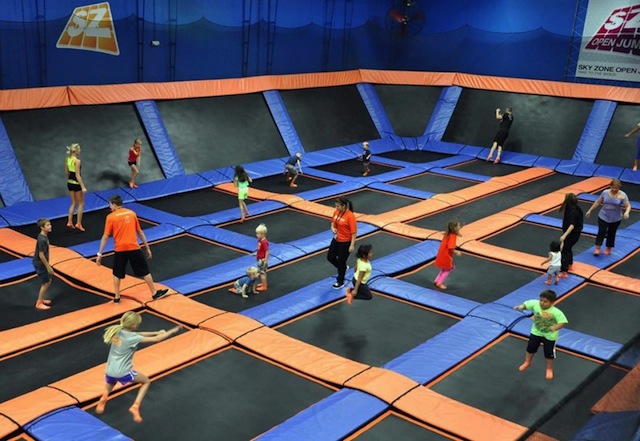 This annual list of the best trampoline park franchises was revised and updated on February 8, 2022.

Trampoline parks were one of the fun, unexpected leisure trends of the 2010s. Consisting of a large room filled wall to wall with trampolines, they create a playful space where people can defy gravity and get a giggle out of flinging themselves around. Fifteen years ago, they barely existed, but now there are over 700 across the US, employing over 6,500 staff. The industry had global revenues of $1.4 billion in 2018 and is currently worth $654 million in the US.

Part of the reason why indoor trampoline parks have exploded in popularity is because of the different and distinct target markets they can serve. Kids love bouncing, so they make for a good family entertainment stream of revenue. But there are also all kinds of exercises that can be done using the trampolines, which make for a whole revenue stream around fitness buffs. Then there are the extreme sports types, who can get their game on with all kinds of crazy competitions, the most popular of which is extreme dodgeball. It’s rare to have this much diversity of customers being served through a single business model.

Rising disposable income and a desire for healthier living helped drive the industry’s growth in the 2010s, as people embraced trampolining as a fun form of exercise. The average age of trampoline park users is rising, as more adults join kids in jumping as a family activity or as a form of exercise.

The COVID-19 pandemic caused problems for trampoline parks, as they had to shut down to stop the spread of the disease. More than a hundred parks across the US were lost, unable to survive the financial challenge. With vaccines rolling out and the economy recovering, trampoline parks have reopened and the industry is looking to expand. Some changes are necessary, with more sanitizing and many parks switching from foam pits to giant airbags to make cleaning easier. For a new franchisee, it’s important to keep track of these shifting approaches, to avoid the additional costs of replacing outdated equipment.

Growth across the economy will be good for trampoline parks, with higher disposable income meaning that they get more customers. As a relatively new industry, trampoline parks have previously seen slightly inflated growth, which will diminish as they approach saturation, but good growth is still expected over the next five years.

High set up costs mean that this isn’t one of the simplest industries to enter. There are also concerns about injuries, and though the rate of injury is roughly equivalent to that for swimming pools, the novelty of trampoline parks can make people more nervous. Because they’re a relatively recent phenomenon, the parks are largely unregulated, so it falls on the business owner to establish and maintain critical safety standards.

Proper setup, supervision, insurance, and regular inspections are all important in making a safe business. Insurance premiums alone can cost 4.5%-6% of revenues, but they’re crucial to running a business involving physical activity, where high profile accidents and the attendant court cases have made news headlines.


Setting up a park goes beyond just the trampolines. A significant chunk of profits can come from selling refreshments and merchandise, so these need to be part of the business plan.

The average age of users is rising, as more teenagers and adults recognize how much fun trampolining can be, as well as its health benefits. Focus on these parts can be a good way to market a business, with events, games, and challenges targeting these older demographics. Assault courses, basketball hoops, dodgeball, fitness sessions, and date nights can all be used to lure in older customers. Adding other entertainment, such as climbing walls and videogame machines, also adds to the variety and appeal of a park, and makes it less vulnerable to shifts in what customers enjoy.

Though average attendance is aging, 77% of jumpers are 17 or younger, so questions around child welfare also have to be taken into account when making plans for the business. Staff will need appropriate training, and local laws for working around children have to be carefully considered.

While some trampoline parks are outdoors, there’s a strong preference for indoor venues. This allows customers to use the park in all kinds of weather and can make equipment easier to manage and maintain. This factors into the decision about where to set up a trampoline park, and the costs of getting established. Ease of use is also driving bookings online – 40% of bookings were made there even before the COVID-19 pandemic – and so an effective online booking system is crucial.

In spite of the media highlighting the problems with trampoline parks, many people love going to a place where they can literally bounce off the walls and have all kinds of crazy fun. Different brands go to great lengths to keep coming up with different kinds of attractions, programs, and innovative offerings to keep things fresh. If you can tap into a local market of lively kids, and build a plan to grow by drawing in more adults, then this could be your chance to run a franchise with real novelty value.

The Top 5 Trampoline Park Franchises of 2022

Sky Zone was the first franchise on the scene, installing its first trampoline park in Las Vegas in 2004. And its innovative design for trampoline courts is protected by US Patent 5,624,122. New locations of Sky Zone have become profitable in just weeks, which is unheard of in most franchise business models.

Sky Zone locations offer a huge range of programs and activities, but is best known for sponsoring the Ultimate Dodgeball Championship where the top 30+ teams competed for cash prizes. After seven years of success, Sky Zone inexplicably canceled the event, though it say it’s working on other ideas for major competitive events. Its most recent offerings of fun games include Skywars (epic team strategic battles with foam ball or foam dart blasters) and Glow (dance club atmosphere with lasers and black lights).

Founded in 2004 by Rick Platt in Las Vegas and franchising since 2009, the number of locations expanded rapidly to 210 but has declined to the current total of 177 (down from the previously reported total of 188), of which 23 are company-owned and 27 are located outside the US.

Urban Air Adventure Park is squarely focused on kids, youth, and families. Birthday parties have become a core offering, along with the Friday Night Glow Party with lasers, strobes, and black lights. Some locations are incorporating an Indoor Skydiving attraction (a kind of vertical wind tunnel that keeps you suspended in mid-air) and/or an Indoor Sky Rider Coaster (a kind of zip line attraction).

Founded in 2011 and franchising since 2014, the number of locations has risen quickly to the current total of 153 (up from the previously reported total of 136), of which four are company-owned and one is located outside the US.

Rockin’ Jump also has a similar focus on kids, youth, families, and fun parties. This chain has introduced a much better food option than other companies with its own Rockin’ Café restaurants with fresh-baked, made-to-order pizzas, sandwiches, salads, pretzels, and beverages.

Attractions include an Open Jump Area for the younger kids, including a pit with foam blocks for soft landings. Other attractions include obstacle courses, X-Beam Jousting, soft-toss Dodgeball Arena, 360 Slam Dunk basketball goal, the Vertical Ops rock-climbing wall, and more.

Two new attractions that feature interactive gaming elements are ValoJump (jumper moves are replicated on the video screen in a game) and ValoClimb (a virtual ball is projected onto the climbing wall and two climbers hit it back and forth to each other as they climb).

Founded in 2010 by Marc Collopy, Drew Wilson, and their families in the San Francisco Bay area and franchising since 2013, the number of locations has quickly risen to 41 as listed on the company website.

Its on-site restaurant concept, Launch Café, includes custom Krave pizzas along with salads and other food items. The Launch Arcade includes video and other games.

Founded in 2012 by retired New England Patriots cornerback Ty Law in Warwick, Rhode Island and franchising since 2013, the number of locations rose rapidly to 34 in 2020 but has since dropped to the current total of 27, of which four are company-owned and all are located in the US.

Big Air Trampoline Park has many of the same jumping attractions as other companies, including a primary trampoline court, foam pit, dodgeball area, basketball dunk area, Battlebeam combat, climbing wall, and so on. More innovative offerings include Lazer Maze where players must bounce across a dark room of trampolines and its web of laser beams without breaking any of them. A leaderboard showcases high scores and gameplay action on digital screens for those waiting to take their turn.

Other attractions include ninja-warrior obstacle courses, a wipeout-style attraction, trapezes, ropes courses, and more. There are designated times and areas for the younger children to bounce safely.

Founded in 2012 by Greg Briggs in Laguna Hills, California and franchising since 2015, the company website currently lists 10 locations open and another five as “coming soon.”