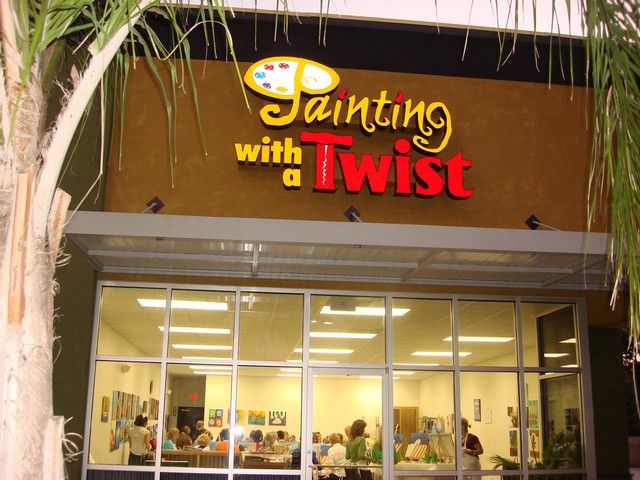 1.  At the beginning of February 2018, Painting with a Twist introduced a new and unique way for customers to create customized screen artwork that is weather resistant and eco-friendly. The new art program, called Rebeca Flott Arts Screen Art, is now available exclusively at participating Painting with a Twist studios. The technique uses framed window screens to display painted artwork.

2.  Led by a local artist, customers use artist mud to fill in sections of the screen and then paint. The artist mud creates texture on the painting and the screen material provides a versatile and unique way to display art. The class is priced at $45 and customers can choose from more than 40 original Rebeca Flott paintings available in the Painting with a Twist library.

3.  Painting with a Twist co-founder Cathy Deano said, “We’re beyond excited to provide our guests with an entirely new way to express themselves through art. We are constantly striving to enhance our guest experience and Rebeca Flott Arts Screen Art Exclusively at Painting with a Twist does just that. Everyone who attends a class will be able to create their own unique masterpiece they can display inside or out.”

7.  Andre Collins, executive director of the NFLPA’s Professional Athletes Foundation, said, “Last year’s event in Houston was so well received that we decided to partner with Painting with a Twist again. Painting with a Twist is a respected organization devoted to charitable campaigns and their efforts to aid and educate local community organizations aligns perfectly with ours. We hope to continue our partnership for many years to come.”

Plans for Significant Expansion in California

8.  At the end of June 2017, Painting with a Twist announced its plans to add five more studios in California by the end of 2017. This is the brand’s most significant expansion in the state since signing its first California franchise in 2013. The company signed single-unit franchise agreements to bring studios to Costa Mesa, Lakewood, Los Angeles, San Diego, and Thousand Oaks, which were all set to open by the end of the year.

9.  The growth in California reflects the brand’s expansion in new markets throughout the country. In the same announcement, Painting with a Twist said that it was also opening its very first studios in Wisconsin, New Mexico, and Arizona.

10.  Michael Powers, managing director of Painting with a Twist, said, “We have finally arrived on the West Coast in more numbers and franchise interest now is the highest that we have received from the Golden State in our franchising history. Our recent appearance on ‘Undercover Boss’ catapulted our brand popularity in areas where we haven’t had much of a presence in the past and we’re now excited to show Californians why we are ranked the No. 1 paint-and-sip studio in the country for the past four years in a row.”

11.  Painting with a Twist was founded in 2007 by Cathy Deano and Renee Maloney in Mandeville, Louisiana. They wanted to bring business and fun back to their community after it was ravaged by Hurricane Katrina. Deano and Maloney initially called the business Corks N Canvas and the first class was taught in Deano’s barn. The first official Corks N Canvas location opened later in 2007 and by 2009 the business had grown to four studios in the New Orleans area.

12.  Deano and Maloney started franchising the concept under the new name, Painting with a Twist. The first franchise location opened in Lafayette, Louisiana. By the end of their first year of franchising, Deano and Maloney had opened 24 new Painting with a Twist studios. In less than a decade, the company has grown to over 350 locations across 39 states.

All (158 Painting with a Twist Franchisees)