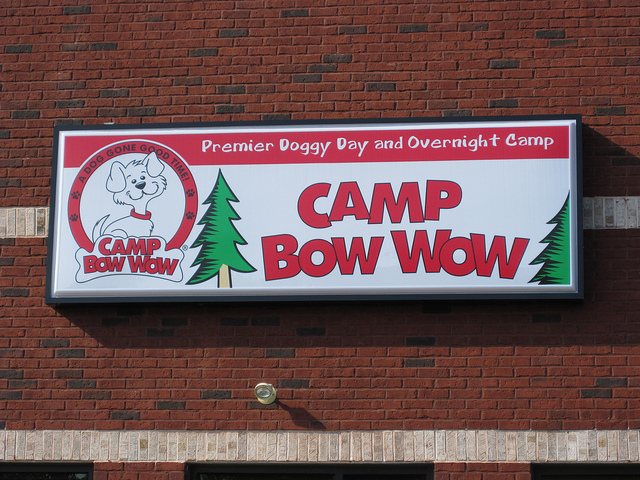 1.  Toward the end of May 2017, Camp Bow Wow relocated its headquarters to Westminster, Colorado, where it now occupies a new 8,289-square-foot space conceived with dog friendliness in mind. The franchise is committed to its dog-driven core values and encourages its corporate employees to bring their dogs to work regularly – even into meetings.

2.  The new office’s interior design and floor plan benefit both Camp Bow Wow’s employees as well as their pets. The space’s intentionally long hallways provide a place for employees to play fetch with their pups, while a gated area in the back of the building gives dogs a chance to socialize and enjoy treats from complimentary dog treat dispensers.

3.  Private office doorways and cubicle “pod” entrances are also affixed with dog gates for staff who want to keep their canines close by, while numerous toys, water bowls, and dog beds are located around the office. In addition to all the dog-friendly features, Camp Bow Wow’s new headquarters offers empty offices and collaborative rooms that are available for staff who need quiet spaces on busy days.

4.  Christina Russell, president of Camp Bow Wow, said, “Our pet-friendly workplace policy is reflective of the fact that everyone who works at Camp Bow Wow is genuinely passionate about dogs. Many of our employees are also frequent foster pet parents, and we are delighted to support their commitment to animal well-being by providing a positive environment for these foster pups while they wait to find their forever homes.”


5.  At the end of June 2017, Camp Bow Wow introduced a 10% Public Protectors discount off its initial franchisee fee. The new offer applies to any potential franchisees who have worked at least two consecutive years as a firefighter, law enforcement officer, or paramedic.

7.  Christina Russell, president of Camp Bow Wow, said, “Frank and Steve have done exemplary work for the animals of New Jersey. We are so inspired by their courageous acts and want to extend our deepest gratitude to them as well as to potential franchise owners who have spent their lives going above and beyond in their communities, ensuring everyone, two and four-legged, are living happy and healthy lives.”

8.  The Bow Wow Buddies Foundation – Camp Bow Wow’s nonprofit organization – ended 2017 on a high note, granting more than $150,000 to dogs in need. The Foundation awards grants of up to $2,500 to cover the cost of unplanned, necessary medical care for dogs in need. It focuses its efforts on dogs who are placed in shelters/rescues, as well as on families facing hardships.

9.  The $150,000 raised in 2017 helped 89 dogs, which was an increase of 40% more dogs than in 2016. Erin Askeland, training and communications manager for Camp Bow Wow and the Bow Wow Buddies Foundation, said, “In 2017, we saw the Bow Wow Buddies Foundation gain unprecedented traction as it received support from our franchise owners’ Camps throughout the country as well as through clients and community members.”

10.  Askeland added, “Local initiatives and events hosted at Camps, in addition to dedicated patrons such as ten-year-old Hannah Okel of Waukesha, Wisconsin who asked for donations to the Foundation in lieu of birthday gifts, prove we’ve built a strong network of those who are passionate about fundraising and supporting the Foundation’s cause.”

11.  For 2018, Bow Wow Buddies will continue to engage its franchisees, clients, and community members through meaningful fundraising programs. Its first fundraising event for the year took place on Valentine’s Day.

12.  Camp Bow Wow was founded in 2000 by Heidi Ganahl in Denver, Colorado. Ganahl first got the idea to open a quality doggy daycare and boarding center in 1994, when she and her first husband, Bion, were unable to find an adequate place to take care of their two dogs. The couple conceptualized the idea for a fun and friendly daycare, but sadly, Bion died a few months later in a tragic plane crash. Ganahl used the money from the settlement for Bion’s death to open the first Camp Bow Wow location in 2000.

13.  Three years later, she began franchising the Camp Bow Wow concept and opened the first franchised location in Castle Rock, Colorado. In 2010, the franchise opened its 100th location. Ganahl continued to run Camp Bow Wow for the next few years until it was acquired in 2014 by Veterinary Clinics of America, Inc., a leading animal healthcare company. Today, there are over 150 Camp Bow Wow locations in the United States and Canada.

Previous post: FDD Talk: What You Need to Know About the Dogtopia Franchise Opportunity (Financial Performance Analysis, Costs and Fees)