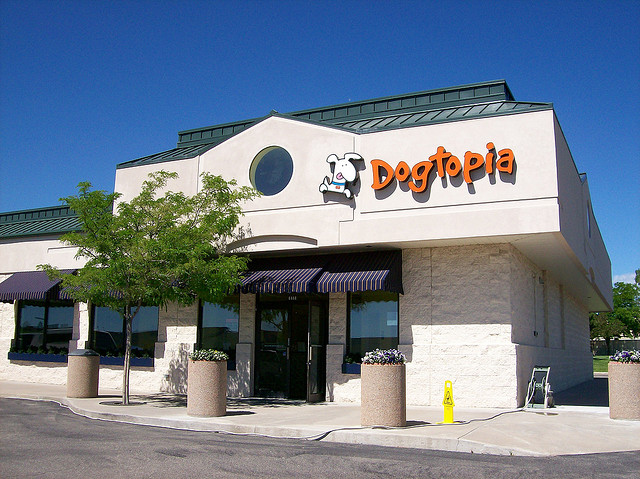 16 Things You Need to Know About the Dogtopia Franchise

1.  At the beginning of 2018, Dogtopia put out a press release that reflected on the company’s record year of growth in 2017. By the end of last year, the brand had 65 stores in operation and an additional 110 stores sold and in development. Dogtopia plans to open 40 new stores by the end of 2018 and is on pace to reach its goal of 400 units by 2021. The franchise also debuted in eight new states in 2017.

2.  According to Dogtopia, its momentum has largely been driven by the growing demand for professional pet care services, as well as the brand’s unparalleled franchise support, training, and franchise industry expertise.

3.  Alex Samios, vice president of franchise development for Dogtopia, said, “The demand for superior dog care services is evident in our impressive 15 percent comparable same-store sales growth last year and will only continue as the awareness of our brand grows. With 15 years of industry leading experience, Dogtopia is primed to capture more market share as we continue to attract sophisticated and passionate franchisees.”

4.  Around mid-September, Dogtopia expanded its investment opportunities with the launch of Dogtopia Lite, the brand’s smallest franchise model. Dogtopia Lite facilities average 3,000 square feet, instead of the 5,000 to 10,000 square-foot facilities currently offered.


5.  The smaller model features two playrooms (instead of the standard three), a smaller spa area, and no training room. Although the new model has less capacity, its size opens the door to non-traditional real estate opportunities in high-density urban markets, residential towers, airports, and corporate campuses, among others.

6.  According to Alex Samios, vice president of franchise development for Dogtopia, “The number of pet parents grows by the day and we want to be able to expand our reach while simultaneously offering a more affordable investment opportunity. The Dogtopia Lite model now gives us the freedom to expand our footprint in urban markets that previously weren’t feasible with our larger facilities. With this new level of flexibility, the sky’s the limit for where and how we continue to grow nationwide.”

7.  The investment for a Dogtopia Lite location is targeted at or below $450,000, and the opportunity is available in markets nationwide. At the time of Dogtopia’s press release, there were already three Dogtopia Lite locations (one each in San Jose, California; Jacksonville, Flordia; and Boston, Massachusetts). Dogtopia said that it had plans to open five additional Lite locations by the end of 2017.

8.  Bill Polk, franchisee of the first Dogtopia Lite in Massachusetts, said, “As a first-time business owner, and longtime dog owner, the Dogtopia Lite model made a lot of sense for me. The ability to build a world-class dog daycare with a smaller footprint and all of the offerings of our other, larger locations will also help me achieve profitability quickly. At the end of the day, if my issue is one of being at or near capacity sooner rather than later, well, that’s a good problem to have.”

9.  To kick off the New Year, Dogtopia launched Healthy Dog Central on its website. The brand said that it put together Healthy Dog Central to help pet parents keep their dogs healthy. Dogtopia cited the fact that over half the dogs in North America are clinically obese, which contributes to a shortened life span.

10.  To encourage pet owners to make sure their dogs are in top physical form, Healthy Dog Central provides free recipes, quick tips, videos, and access to its three subject matter experts – an animal behaviorist, a veterinarian, and an environmental biologist.

11.  In addition to content about proper feeding schedules, foods for shiny coats, vaccines, clean ears, and more, Dogtopia will host weekly interactive Facebook Live segments in which pet parents can ask questions and receive answers along the way. The Live Q&As will take place on Dogtopia’s Facebook page. All Facebook content will also be available at the Healthy Dog Central website.

12.  Dogtopia president and CEO Neil Gill said, “At Dogtopia, happy and healthy pups are at the heart of who we are. Our facilities focus on quality of care by providing a healthy, safe, and fun environment for dogs to develop positive behavior, exercise, socialize, and learn to be a well-balanced pup. While we are proud of the experience we provide for dogs in our care, Healthy Dog Central helps us extend our expertise to pet parents worldwide as they seek to improve their pup’s health in 2018.”

13.  Dogtopia was founded in 2002 by Amy Nichols and her husband Mike in Virginia. The company not only offers dog daycare, but boarding and dog spa services as well. It was one of the first major franchises in the pet services industry. Dogtopia focuses on providing high-quality pet services that emphasize education, exercise, and socialization for dogs.

14.  Each facility averages between 3,500 to 10,000 square feet, which allows for multiple, spacious playrooms where dogs can be separated by size and temperaments. There are also multiple webcams
located in each facility, which dog parents can access to ensure their pet is doing well.

15.  Dogtopia started franchising in 2005 and has grown to over 65 locations in the United States and Canada. In 2015, Dogtopia was acquired by Thomas Franchise Solutions. Neil Gill was appointed as the company’s new CEO and president, and Dogtopia relocated to Phoenix, Arizona.

Next post: FDD Talk: What You Need to Know About the Camp Bow Wow Franchise Opportunity (Financial Performance Analysis, Costs and Fees)