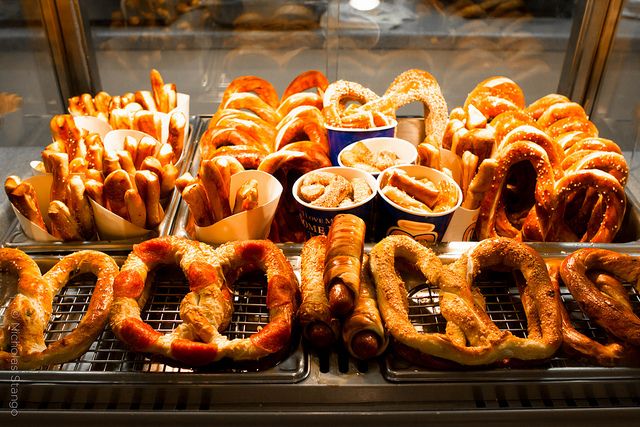 1.  As consumer foot traffic has declined in physical retail spaces such as malls – where Auntie Anne’s is a staple – Auntie Anne’s has been looking for new ways to get people to eat more pretzels even if they’re not near the mall. In October 2017, the brand launched a promotion it called “Shoptoberfest” and said that it was a new holiday created specifically for shopping enthusiasts nationwide.

2.  From October 9 through October 14, customers could use the My Pretzel Perks mobile app to avail of the Buy One Get One (BOGO) pretzel promotion while they shopped. To go along with the BOGO promotion, Auntie Anne’s jokingly marketed a “Hands-Free Pretzel-Eating Apparatus” to make it possible to eat a pretzel while holding shopping bags.

3.  Heather Neary, president of Auntie Anne’s, talked about the other ways that Auntie Anne’s has been trying to get consumers to buy more pretzels, including catering and delivery services. Auntie Anne’s has offered catering for years, but recently relaunched the service with new packaging materials, and invested in advertising. Neary said that catering “takes us from an impulse purchase to a more logical solution to afternoon meetings, tailgates and business events.”

4.  In addition to catering, some Auntie Anne’s locations are using food trucks and concession trailers. Some franchisees are even using mobile delivery services to get pretzels to their customers. Neary said that Auntie Anne’s plans to roll out delivery nationwide. She talked about how delivery could be more profitable because consumers tend to order more items than they typically would at a mall kiosk.


5.  In June, Auntie Anne’s asked its followers on social media to make flavor suggestions. The brand received over 1,200 suggestions, from which it chose the ten most popular flavors to compete as Pretzel Nation Creation finalists. There was a mix of sweet and savory flavors, including Apple Pie, Chocolate Cherry, Maple Brown Sugar, S’mores, Pink Lemonade, Sriracha, Taco, Korean BBQ, Dill Pickle, and Buffalo Wing.

6. From July 21 through July 30, Auntie Anne’s asked the public to vote on its next pretzel flavor. Customers were asked to vote on the flavor they liked best at www.pretzelnationcreation.com. At the end of the contest, Auntie Anne’s announced that the winner was Sriracha. The new Sriracha Pretzel and Pretzel Nuggets were rolled out in October 2017.

Celebrates the Release of the Pretzel Emoji on Apple iOS

7.  At the beginning of November 2017, the pretzel emoji was released on Apple iOS and Auntie Anne’s decided to celebrate the occasion. The brand gave away a coupon for a free Classic Pretzel with any pretzel purchase to its My Pretzel Perks loyalty members. Auntie Anne’s also rewarded the first 100 customers who used the pretzel emoji and the hashtag #AuntieAnnesGiveaway on Instagram.

Definition of Terms for Auntie Anne’s Profit and Loss Statements