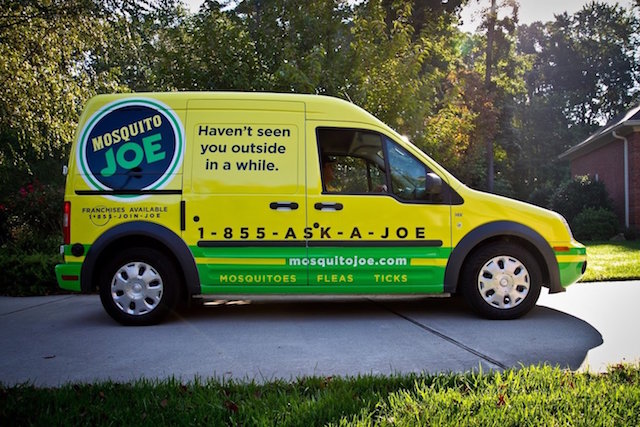 10 Things You Need to Know About the Mosquito Joe Franchise

1.  At the start of 2018, Mosquito Joe celebrated its previous year of rapid growth. The brand sold 55 new territories in 2017 and said that it will have 285 locations open by the end of 2018. Mosquito Joe also plans to reach 388 locations sold by the end of this year.

2.  Mosquito Joe CEO Kevin Wilson said, “Reaching this milestone will extend and strengthen Mosquito Joe’s position as the market leader, which is vital to our future growth. We became the largest provider of outdoor pest control in the country based solely on our number of units, and we plan to extend this lead in 2018. This is a true testament to all of our franchisees, and the hard work they’ve dedicated to the success of their businesses.”

3.  In addition to its impressive growth, Mosquito Joe ranked on several top lists in 2017, including Franchise Business Review’s Top Franchises for Veterans and Top Franchises in the Home Services category; Inc. magazine’s Fastest Growing Private Companies and Best Places to Work; and Entrepreneur’s Franchisee 500, where it was number one in its category and number 26 overall.

4.  At the end of October 2017, Mosquito Joe hired Lou Schager as its new chief operating officer to help streamline its processes, further maximize efficiency and quality of services, and expand growth opportunities. Schager comes to the company after spending more than 26 years in the United States Navy. He most recently served as the Commanding Officer of Naval Air Station Oceana in 2014, overseeing all aspects of operations, logistics, safety, and security for more than 16,000 personnel across three separate bases. In his new role as COO, Schager will work on further refining Mosquito Joe’s processes, starting by improving training for new franchisees and for those looking to expand into multi-unit operations.

5.  Mosquito Joe said that with Schager onboard, the company will aggressively pursue growth opportunities in key markets nationwide. The brand plans to initially focus on Chicago, Denver,
and the Northeast. Mosquito Joe also has plans to open its first California locations in 2018, while also focusing on multi-unit expansion.

6.  During National Mosquito Control Awareness Week (June 25 to July 1, 2017), Mosquito Joe highlighted its two charitable partnerships to promote the fight against mosquitoes both locally and internationally. The brand continued its fifth year of working with local blood banks to raise awareness about mosquito-borne illnesses and the importance of mosquito control through its “Beat the Bloodsuckers” campaign. For every new customer that received a service from their local Mosquito Joe during that week, the brand donated a percentage of those sales to local blood donation centers.

7.  Additionally, Mosquito Joe and the United Nations Foundation’s Nothing But Nets initiative announced a new partnership to raise awareness and funds to fight malaria. For every new customer serviced that week, Mosquito Joe franchisees donated $10 to Nothing But Nets to pay for an insecticide-treated bed net to be provided to a family in sub-Saharan Africa at risk of malaria and without the resources to stay protected.

8.  Mosquito Joe was founded in 2009 by Thomas Minton, Michael Burnette, John Mason, and Clay Winn in Norfolk, Virginia. They identified a need for local mosquito control services and initially tried to get rid of the mosquitoes in their own backyards. Through trial and error, the four friends developed an effective spray and a year later they started offering their services to their friends, family, and neighbors in the Norfolk area. Mosquito Joe quickly took off and franchising began in 2013.

9.  The founding members of the business hired Kevin Wilson as the new CEO of Mosquito Joe because they believed that Wilson would be able to help them grow the business. In just a few short years, Mosquito Joe has grown from one van and sprayer to over 236 locations across the United States.

A.  Detailed Income Statements for the Year 2017

Next post: FDD Talk: What You Need to Know About the Panda Express Franchise Opportunity (Financial Performance Analysis, Costs and Fees)