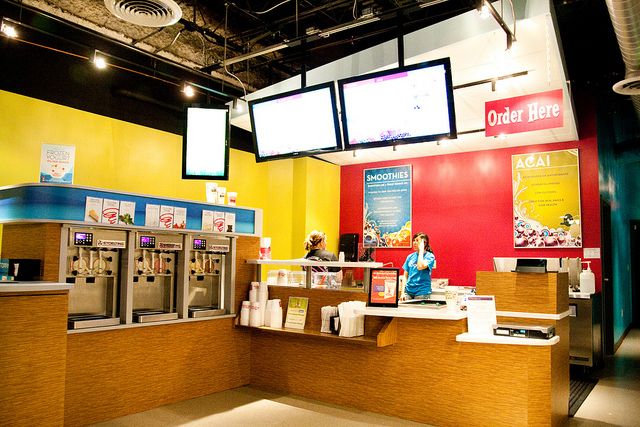 12 Things You Need to Know About the Planet Smoothie Franchise


1.  In late 2016, Planet Smoothie added almond milk to its menu as its first non-dairy milk option. To celebrate the launch of the new option, Planet Smoothie released three limited-time vegan smoothies: Pineapple Tropi-Kale Twist, Salted Peanut Butter Cup, and Strawberry Chia Chiller. Each vegan smoothie was developed with health and allergen sensitivity in mind and was a chance for customers to try out the almond milk option. The smoothies were available from September 5 until January 1, 2017; almond milk has been added as a permanent option.

2.  Nicole Butcher, national marketing manager for Planet Smoothie, said, “Almond milk is a fantastic option for consumers seeking dairy-free alternatives and it’s so good you can’t even taste the difference. Planet Smoothie is excited to launch almond milk as an option in stores and continue to satisfy all of our customers with delicious tasting products that cater to specific dietary needs.”

4.  The Smoothie Bowls were available in three flavors: Amazon Kick, Daybreak Crunch, and Nutty Brazilian. The Amazon Kick Bowl and Nutty Brazilian Bowl both featured Sambazon açaí, the first and only certified organic, fair trade açaí in the world. The Daybreak Crunch Bowl included fresh fruit, Greek yogurt, and whole grain oats. Just like its smoothies, all of the bowls could be customized with add-ins like leafy greens or toppings like coconut or honey.


5.  Nicole Butcher, national marketing manager for Planet Smoothie, said, “We are thrilled to bring Smoothie Bowls to all Planet Smoothie locations for a limited time. All three of them are a refreshing and satisfying option for breakfast, lunch, or even a mid-day snack.”

6.  Planet Smoothie consistently releases several seasonal flavors throughout the year to keep its menu fresh. In May, the brand launched its Crazy for Kiwi smoothies to kick off the summer season. The three smoothies featuring kiwi and Greek yogurt were: Sun-Kissed Kiwi, Easy Breezy Kiwi, and Totally Tropical Kiwi. The smoothies were available until the beginning of September at participating Planet Smoothie locations.

7.  At the start of 2017, Planet Smoothie rolled out a line of Balanced Smoothies, which were high in protein and low in calories. The three smoothies featured PB2, a powdered peanut butter that’s full of nutrients and flavor. The Big Bang, Mountain Man Crunch Lite, and Chocolate Elvis Lite, which is a lighter version of Planet Smoothie’s No. 1 selling smoothie, all contained 340 calories or less and had balanced fat-carbohydrate-protein ratios.


8.  Planet Smoothie was founded in 1995 by Martin Sprock in Atlanta, Georgia. Over the next few years, Planet Smoothie grew throughout the Southeastern and Northeastern United States. Franchising began in 1998.

10.  For example, the brand has developed its own sweetener made from stevia to ensure that its drinks still taste the same, but have fewer calories and a lower sugar content. The brand also started using cocoa powder instead of chocolate syrup in its chocolate-flavored drinks and added leafy greens as an option for any of its smoothies.

11.  Today, there are over 110 Planet Smoothie locations across 20 states.

Next post: Q&A with David Graham, Founder and CEO of Code Ninjas