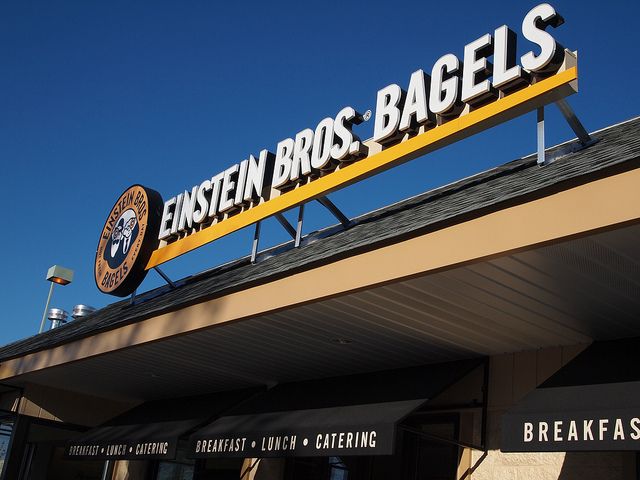 17 Things You Need to Know About the Einstein Bros. Bagels Franchise

1.  Near the end of March, Einstein Bros. Bagels announced that it was making a commitment to work with its suppliers, licensees, and industry partners to improve the welfare of broiler chickens that the company sources. The brand also said that it will ensure that by 2024 it will only buy chicken that is produced in alignment with the standards set by the Global Animal Partnership (GAP), an international farmed animal welfare certification program.

2.  The standards that Einstein Bros. commits to are as follows:

3.  Einstein Bros. added that sourcing high-welfare chickens will not only give these chickens a better quality of life but will also provide better quality products to its customers. Kerry Coyne, Senior Vice President of Marketing, R&D, and Catering for Einstein Noah Restaurant Group, said, “We at Einstein Bros. have worked hard to elevate our products, from delicious bagels made with simple ingredients to the great products we put on them. Making a commitment to ensure all broiler chickens we buy are treated with appropriate welfare standards is an important step in this work to offer the best food we can to our guests.”

6.  To celebrate the launch of the Boosted Bagels, Einstein Bros. honored nurses during National Nurses Week by giving them a free Espresso Buzz Bagel and shmear on May 11. Any nurse that stopped into a participating location wearing their scrubs or showing their work ID received the free bagel.

7.  Additionally, Einstein Bros. encouraged nurses to share how the Espresso Buzz Bagel helped them get through their day on social media by using the hashtag #NurseTheBuzz. The company also ran a social media contest on Twitter and Instagram called #NurseTheBuzzSweepstakes.

8.  Einstein Bros. asked customers outside of the nursing profession to write a thank you message for a nurse who made a difference and share it on social media using the hashtag or on www.nursethebuzz.com. Everyone who sent a message was rewarded with a coupon for a free Boosted Bagel and shmear with purchase, as well as entry into the sweepstakes, where the grand prize was one free bagel with shmear each week for a year.

9.  At the beginning of August, Einstein Bros. Bagels launched its newest menu item, Shmearfuls, bite-sized, Shmear-filled bagel snacks that come in six mix-and-match flavors. In conjunction with the release of the Shmearfuls, the brand ran a “Shmear Campaign,” which aimed to lessen the negativity on social media.

10.  The company was inspired to launch the campaign after seeing the results of a survey conducted by Wakefield Research, which reported that 65 percent of Americans see negative comments or posts on social media every day, with nine in ten distancing themselves from disparaging posts or taking a break from social media altogether.

11.  Einstein Bros. encouraged its customers to “transform online negativity into smiles” by adding “shm” in front of negative words, for example changing the word ugly into “shmugly.” As an incentive to join the campaign, Einstein Bros. offered consumers a coupon for a free Shmearful with purchase when they send a compliment to a friend, family member, or a stranger on Twitter using the hashtag #ShmearCampaignPromo.

12.  The brand also had a “Frenemies Eat Free” event on August 8. Any customer who came in that day with a “frenemy” (an enemy turned friend or just a friend) was able to use a Buy One, Get One deal on Shmearfuls by using the code words “Shmear Joy” at the counter.

13.  In another effort to get rid of negativity in the world, Einstein Bros. partnered with Ditch the Label, one of the world’s largest anti-bullying charities, to support children and young adults who have been personally affected by online bullying. From September 11 to 17, Einstein Bros. donated $1 for every Shmearful purchased at participating locations, to assist Ditch the Label.

15.  The first Einstein Bros. Bagel shop was opened in Ogden, Utah in June 1995 and by the end of the year, PBCI officially became Einstein Brothers Bagels, Inc. (EBBI). Throughout the rest of the 1990s, the company continued to expand and EBBI acquired a few more small-scale bagel chains.

16.  Einstein Bros. Bagels grew too fast in a short amount of time and declared bankruptcy in 2000 after making too many loans to franchisees. New World Coffee bought the company out of bankruptcy for $190 million.

17.  The company was sold again in 2014 to JAB Holding Company – a German conglomerate that owns other breakfast food companies such as Peet’s Coffee & Tea, Krispy Kreme, Caribou Coffee, and most recently Bruegger’s Bagels – for about $374 million. Today, there are over 700 Einstein Bros. Bagels locations across the U.S.

18.  Einstein Bros. Bagels has not ranked on Entrepreneur’s annual Franchise 500 list in the last 10 years.

Next post: The 18 Best Mexican Restaurant Franchises of 2021 (Updated Rankings)