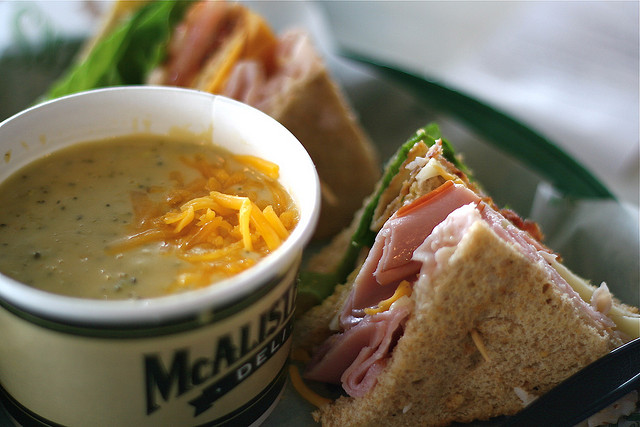 1.  Near the end of April, McAlister’s Deli hit a major brand milestone with the opening of its 400th restaurant (in Cedar Hills, Texas). To celebrate the occasion and to thank its loyal customers, McAlister’s gave away free club sandwiches with the purchase of a glass of McAlister’s Famous Tea to anyone who downloaded and placed their order through the McAlister’s mobile app from May 1-4.

2.  Paul Macaluso, president of McAlister’s Deli, said that the company’s long-term goal is to open a location in every state and that there are “still tons of opportunities” for McAlister’s to expand across the U.S. Macaluso added that although McAlister’s intends to continue to grow, it doesn’t want to overextend itself because it wants to ensure that it can support its franchisees and leverage its supply chain.

3.  Over the next few years, McAlister’s is targeting key states such as Florida, Georgia, Iowa, and Texas. At the time of the 400th location’s opening, McAlister’s said that it plans to open 33 additional restaurants by the end of 2017.


5.  The Garlic Herb Roast Beef Sandwich features premium, tender roast beef, topped with cheddar cheese, herb mayo, tomato, and spring mix, served on toasted 9-grain bread. It is available as a whole sandwich or a half sandwich with McAlister’s “Choose 2” option. The Salted Caramel Cookies blend caramel with crunchy sea salt and is freshly baked in-house like all of McAlister’s cookies.

6.  In July, to follow up on National Iced Tea Month in June, McAlister’s added Lemonade Tea to
its beverage menu at all of its locations. The Lemonade Tea combines freshly brewed McAlister’s Famous Tea with lemonade that is made with pure cane sugar, just like McAlister’s tea. The company said that the addition of the lemonade to its iced tea, which is made with Rainforest Alliance Certified™ tea leaves, provides customers with a “year-round beverage alternative without having to sacrifice their beloved tea.”

7.  Paul Macaluso, president of McAlister’s Deli, said, “Our Lemonade Tea is the perfect pairing, allowing guests the opportunity to continue enjoying our famous tea with a vibrant, new twist. This launch solidifies our commitment to beverage innovation while complementing a variety of our menu options, including our fresh, seasonal offerings.”

8.  McAlister’s Deli was founded in 1989 by Don Newcomb in Oxford, Mississippi. A few years earlier, a film crew turned an old gas station in the area into a 1950s style diner, which Newcomb bought after the production company was done using the site. With the help of his two sons and his dentist office manager, Debra Bryson, Newcomb turned the movie set into a real sandwich shop called Chequers. They quickly changed the name to McAlister’s Deli (the maiden name of Newcomb’s wife) to avoid any confusion with the Checker’s franchise.

Previous post: FDD Talk 2017: What You Need to Know About the Zaxby's Franchise Opportunity (Financial Performance Analysis, Costs and Fees)