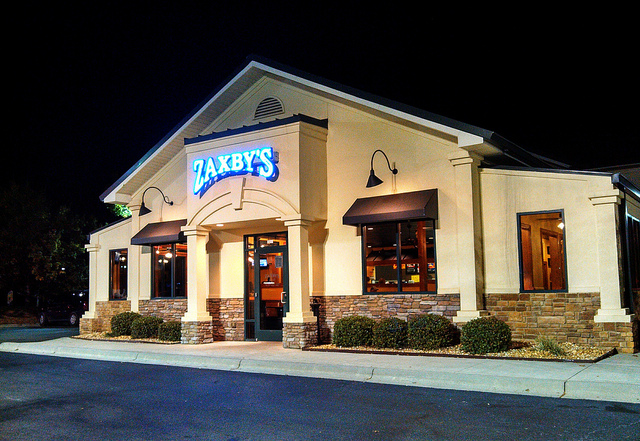 14 Things You Need to Know About the Zaxby’s Franchise


1.  Toward the end of summer 2017, Zaxby’s unveiled its strategic agenda of “fan-first” initiatives for the remainder of 2017. These new initiatives included five first-time meal deals for $5.99 paired with the brand’s new Poolside Punch, a Summer Road Trip campaign, a college football tailgate tour, and the launch of the new Zaxby’s food truck.

2.  Zach McLeroy, CEO and co-founder of Zaxby’s, said, “We made it our mission to bring fresh campaigns and promotions to our guests in the second half of 2017. Our team at Zaxby’s is very aware that our fans drive our business and are the reason for our success. Because of that, and the loyalty they continue to show, we listen to them. That’s what the rest of 2017 is about for us.”

3.  Zaxby’s “5 Meals for $5.99 Each” promotion was available from July 24 through September 24 at all of its locations. The “wallet-friendly” deals featured Zaxby’s traditional menu favorites, including the Big Zax Snak Meal, Boneless Wings Meal, Kickin’ Chicken Sandwich Meal, Grilled Chicken Sandwich Meal, and Chicken Finger Sandwich Meal. In addition to the value meals, Zaxby’s launched its new Poolside Punch on July 31.

4.  Although Zaxby’s did a college tailgating tour last year, the brand launched a new Zaxby’s Summer Road Trip campaign this year. Zaxby’s got the idea for the road trip campaign from its loyal fan base, who have been chronicling their journeys and making stops at Zaxby’s a key part of their trip. As part of the Summer Road Trip, Zaxby’s featured some of the trips on its social media channels and also sent out a “Road Trip Care Package” to select fans and social media influencers and encouraged them to document their trips using the hashtag #RoadtoFlavor.


5.  In mid-September, Zaxby’s unveiled its new food truck as part of an ongoing partnership with International Management Group’s college division. This is the second year in a row that the chicken chain ran its “Zaxby’s Fanz of Flavor” tailgate tour across the country.

6.  According to Erin Todd, Zaxby’s Senior Brand Manager, a majority of Zaxby’s customers are college football fans and the company looked forward to being a part of the game-day experience. The company hosted large-scale tailgate gatherings in six college communities over the fall during highly anticipated rival-school football matches.

7.  The food truck was new for this year’s tailgate tour and served as the centerpiece of an area that included grandstand-style seating, customer games, giveaways, and televisions with satellite feeds to air other college football games, said Todd. She added that with the truck, Zaxby’s was able to offer fresh-cooked chicken fingers.

8.  Another new feature of this year’s tour was the inclusion of one to two social media influencers at each location. Zaxby’s invited these influencers to spend the day with the truck and share their game-day experience across their social media channels including Facebook, Instagram, and Twitter using the hashtag #FanzofFlavor.


9.  In August, Zaxby’s announced that it had signed a five-year deal with the NFL’s Atlanta Falcons to become the team’s Official Chicken. As part of the deal, Zaxby’s was the title sponsor of the Falcons’ Salute to Service Week from October 30 through November 4. The brand will also be the presenting sponsor at the Falcons’ training camp, the Atlanta Falcons/MADD 5K, and Fishing with the Falcons, the annual spring fishing tournament that benefits wounded veterans.

11.  Zaxby’s was founded in 1990 by Zach McLeroy and Tony Townley in Statesboro, Georgia. McLeroy and Townley felt that they could make better chicken than what was available in Statesboro at the time and wanted to offer a chicken restaurant that was fun and had personality. They opened the first location near the Georgia Southern University campus.

12.  Zaxby’s chicken and its Zax Sauce were inspired by a small chicken fingers chain called Guthrie’s that McLeroy frequented while he was a student at the University of Georgia in Athens.

13.  Over the next few years, McLeroy and Townley continued to open locations throughout Georgia. The first franchised location opened in 1994 in Bowling Green, Kentucky. Today, there are over 800 Zaxby’s restaurants across 17 states, primarily in the southern United States.

Next post: FDD Talk 2017: What You Need to Know About the McAlister's Deli Franchise Opportunity (Financial Performance Analysis, Costs and Fees)