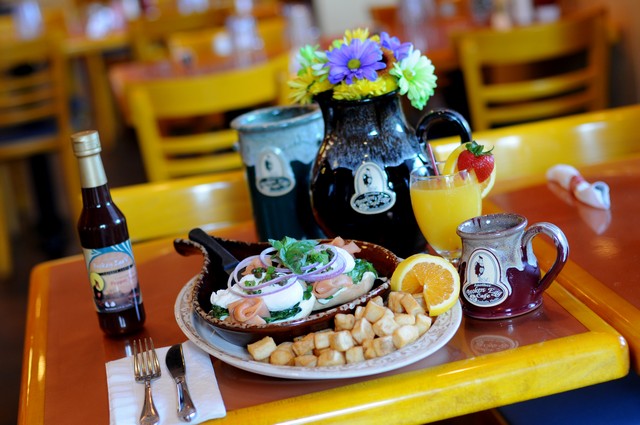 1.  At the start of April, Another Broken Egg Cafe announced that it had partnered with Eco-Products to create new environmentally friendly and easier to use to-go containers. The company said that the new containers are made from a renewable resource derived from the stalks of sugarcane. All of the brand’s restaurants will start using the new clamshells and bowls.

2.  Eco-Products custom designed the 13-by-9-inch clamshell and 8-ounce bowl specifically for Another Broken Egg Cafe and said that the updated containers function just like traditional foam or plastic clamshells. Additionally, the containers are freezer safe, microwave friendly, and grease- and cut-resistant.

3.  Kevin Armantrout, Chief Operating Officer of Another Broken Egg Cafe, said that the company updated its containers because it wants customers to know that it cares “about them as well as the environment.”

4.  Around the same time that Another Broken Egg Cafe released its new eco-friendly containers, the brand also launched its new menu. The company says that the new menu is designed to be easier for customers to navigate and easier for the staff, improving the speed of service at the restaurants.

5.  In February, Another Broken Egg Cafe announced its partnership with the Louisiana Seafood Promotion and Marketing Board to promote the restaurant chain’s use of Louisiana seafood in its new menu items. According to the agreement, all new and existing locations will sell Louisiana shrimp and crawfish.

6.  In addition to the Louisiana seafood, the chain added three new pancake flavors to the new “Sweet Temptations” category, as well as two additions to its “Sensible Solutions” menu items. Kevin Armantrout, Chief Operating Officer of Another Broken Egg Cafe, said that the company is excited about its new menu and new environmentally friendly containers and that Another Broken Egg Cafe has “a lot of great things going on right now.”

8.  The brand is calling its seasonal menu the “Fall Farmers’ Market” and says that the new items offer “an eclectic mix of fresh produce and ingredients combined to create hearty selections to satisfy the taste buds.”

10.  Another Broken Egg Cafe was founded in 1996 by Ron Green in Louisiana. Green found the site for the first cafe in 1994 in Old Mandeville, Louisiana and spent the next two years renovating the old building which dates back to 1908. By that summer, the house was fully restored and “The Broken Egg Cafe” opened its doors during the week of Thanksgiving in 1996.

11.  Green didn’t advertise his new restaurant, but relied on word of mouth instead. Within the first two months, the cafe quickly became a popular dining spot for locals. Green changed the restaurant’s name after a regular at the first location asked him to open up “another Broken Egg” in New Orleans.

12.  He opened up a few more locations in the area during the rest of the 1990s and franchising officially began in 2005. Today, there are over 65 locations, mostly in the Southeastern U.S.