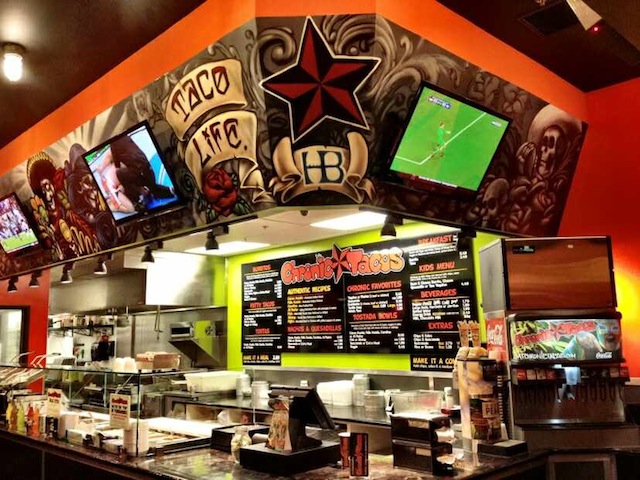 12 Things You Need to Know About the Chronic Tacos Franchise

Plans to Expand into Japan

1.  At the end of September, Chronic Tacos announced plans to expand into Japan. Chronic Tacos signed a 10-year master franchise agreement with K&B Brothers, a subsidiary of Kadoya group, based in Tokyo, Japan. That country’s first location is scheduled to open sometime in late 2017 in Tokyo.

2.  Ryohei Iwatani, President of K&B Brothers, said, “I believe that there is a lack of quality fast-casual Mexican food in Japan and am looking forward to bringing the unique flavor and branding of Chronic Tacos to this country.” Additionally, Chronic Tacos President and CEO Michael Mohammed thinks that the brand will do well in Japan “as there isn’t anything else like it outside of North America.”

3.  Chronic Tacos launched its first customer loyalty mobile app near the end of August. The Chronic Tacos app is available on Android and Apple iOS and allows consumers to order and pay for food in addition to offering rewards such as a free taco just for downloading the app.

6.  The company says that its previous loyalty rewards program will be honored for the first few months after the app’s release and that customers can transfer any current loyalty points to the new app.

7.  Michael Mohammed, President and CEO of Chronic Tacos, said, “The most important thing we can do is listen to our customers and make the Chronic Tacos experience as easy as possible for them. We knew embracing technology and creating an app could shift the way consumers order and pay for food and help even more people embrace ‘The Taco Life.’”

8.  Although Chronic Tacos has been franchising for over a decade, most of the brand’s growth has taken place over the last year and the company says that it will continue to build upon this new growth into 2018. In 2016, Chronic Tacos saw a 50 percent expansion and over the summer, the brand said that it will have opened 26 new locations in the U.S. and Canada by the end of 2017.

9.  Chronic Tacos plans to keep growing throughout 2018 and already announced that next year’s openings include restaurants in Barstow, California; Newbury Park, California; Alberta, Canada; Denver, Colorado; and Mid-Town Westside, Georgia. President and CEO of Chronic Tacos Michael Mohammed said that the company is in “full momentum” and has no plans to stop anytime soon.

10.  Chronic Tacos was founded in 2001 by Randy Wyner and Dan Biello in Newport Beach, California. At the time, Wyner and Biello didn’t have any restaurant experience so Wyner’s friend provided them with help and an authentic family recipe for their tacos. In 2006, Biello’s brother Mike Biello joined the company and the trio formed Chronic Tacos Enterprises to start franchising the brand.

11.  That same year, the first franchised location was opened in San Clemente, California. Chronic Tacos’ growth has remained moderate and there are currently over 50 locations in states such as California, Arizona, North Carolina, Washington, Colorado, Nevada, Utah, and Alabama. There are also a few international locations in Canada.