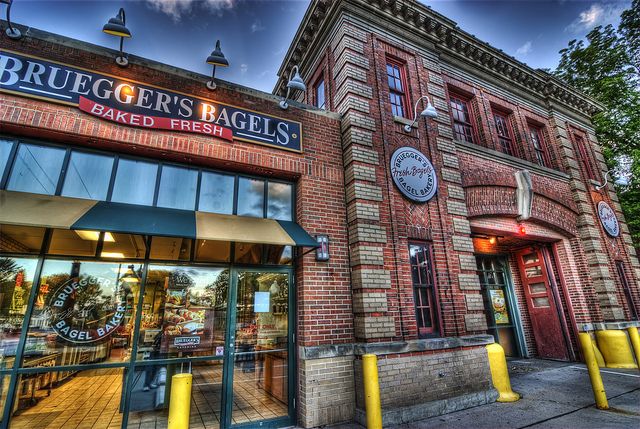 1.  In late August, Le Duff America Inc., Bruegger’s Bagels’ parent company, announced that it had agreed to sell Bruegger’s to Caribou Coffee Co. The sale will give Caribou’s parent company, JAB Holding Co., an even bigger share of the coffee and breakfast market – JAB already owns Einstein Bros. Bagels, Intelligentsia Coffee & Tea, Peet’s Coffee & Tea, Krispy Kreme, and Panera Bread. The deal closed at the end of September; the terms of the deal were not disclosed.

3.  A spokesperson for Caribou Coffee said, “We have long respected the Bruegger’s brand, which has a loyal customer following and strong heritage in the bagel business, and we are eager to be a part of the next chapter of the company’s growth.”

6.  After Thanksgiving, the Pumpkin Bagel will be replaced with the Cranberry Orange Bagel. Bruegger’s Bagels Vice President of Marketing Judy Kadylak says that the menu changes “celebrate all the savory goodness of fall.”

7.  Last February 2, Bruegger’s Bagels celebrated its 34th anniversary by offering customers three free bagels if they presented a coupon, which was available from the brand’s website. In order to receive the coupon, customers had to fill out a short form. The special offer was valid only from the time a store opened until 11 a.m. on that day.

8.  Bruegger’s Bagels Vice President of Marketing Judy Kadylak said, “We take great pride in our authentic bagels that have been the cornerstone of our company since the beginning. This free bagel offer is our way of saying thanks to our loyal fans across the country.”

9.  Bruegger’s Bagels, the first major bagel chain in the United States, was founded in 1983 by Nordahl Brue and Mike Dressell in Troy, New York. Brue and Dressell wanted to capitalize on the demand for bagels across the country, as fresh and authentic ones were hard to find outside of major cities.

10.  Early on, Brue and Dressell slowly and carefully expanded the business organically; franchising did not begin until 1993. Within 18 months of franchising the Bruegger’s concept, the company grew to 155 stores in 16 states.

12.  In 2003, Brue and Dressell sold the company to James J. Greco and Sun Capital Partners; Bruegger’s was sold again in 2011 to Groupe Le Duff of France. Le Duff America announced this past August that it had sold Bruegger’s to Caribou Coffee (and its owner JAB Holding Co.) for an undisclosed amount; the deal closed at the end of September.

13.  Over the years, Bruegger’s Bagels has continued to grow and today, there are over 260 locations across the U.S.

Next post: FDD Talk 2017: What You Need to Know About the Soccer Shots Franchise Opportunity (Financial Performance Analysis, Costs and Fees)