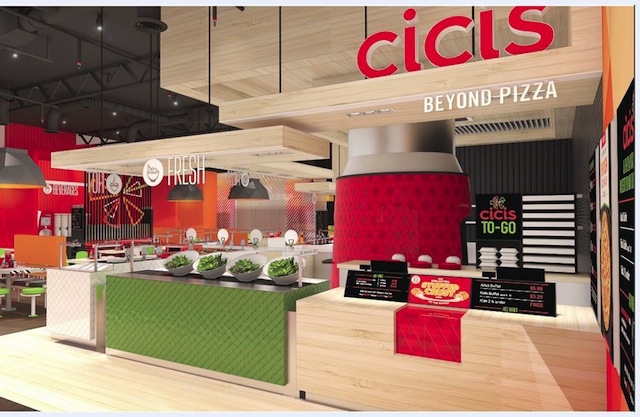 12 Things You Need to Know About the Cicis Franchise

1.  Over the past few years, Cicis has enjoyed steady sales growth as a result of revitalizing its brand. In October, the company announced that it was going to “accelerate new restaurant openings” in order to build on this momentum. The company says that it currently has nine new franchised and corporate restaurants under construction, with five additional leases signed and construction pending. Cicis plans to open a few more restaurants by the end of the year, including one in Bastrop, Texas and another in Fulshear, Texas.

2.  Cicis reports that new restaurant openings are generating unprecedented buzz for the brand as customers are responding well to Cicis’ improved food quality, menu additions like Stuffed Crust pizzas, and new restaurant design. One of the company’s newest locations in Orangeburg, South Carolina created so much interest that customers camped out overnight and lined up around the block for the store’s grand opening.

3.  Cicis CEO Darin Harris said, “With every new restaurant opening, we are improving our brand perception with great-looking restaurants, outstanding buffet offerings and a high-quality guest experience – all at a great value.” For 2018 and beyond, the company has signed multiple development agreements with franchise partners representing more than 68 future restaurants in 14 states.

5.  As always, customers have the option to customize these pizzas for carryout and can also add an order of 3, 5, 10, or 20 wings, available in Hot Buffalo, Mild Buffalo, Garlic Parmesan, and BBQ.

6.  Cicis CEO Darin Harris said, “We created a whole new category of pizza at Cicis for wing lovers who don’t want to choose between their favorite flavors, and who love to try new things. And it’s no accident that we’re bringing in our ‘wings by the slice’ for football season – they combine the two most popular game day foods in one delicious bite.”

7.  Earlier in 2017, Cicis appointed Jini Foust as its new Chief Operating Officer and Billie Jo Waara as its new Chief Marketing Officer. Foust has more than 30 years of experience in the multi-unit restaurant industry, including 10 years with McDonald’s Corp. and 23 years at Yum! Brands, Inc. She most recently served as Vice President of Company Operations and Facilities Maintenance for Taco Bell Corp. In her new role as COO, Foust will oversee Cicis’ franchise and corporate operations, service, and training.

8.  Prior to joining Cicis, Billie Jo Waara served as CMO of Taco John’s and is credited with digital initiatives and culinary innovation at the taco franchise. Waara said that she is looking forward to working with the brand to build upon its success and further the company’s growth.

9.  Cicis (formerly CiCi’s Pizza) was founded in 1985 by Mike Cole and Joe Croce in Plano, Texas. The company began franchising in 1987 and over the next decade opened restaurants across the U.S. By 2001, there were over 363 Cicis locations in the country. Around this same time, Cicis started remodeling its stores and expanded its pizza buffet offerings.

10.  In 2003, Croce retired from the company and passed ownership of Cicis over to the company’s executive team. Since Croce retired, Cicis has had a few different CEOs; Darin Harris is the current CEO after joining the brand in 2013.

11.  Near the end of 2015, the company changed its name from CiCi’s Pizza to Cicis with the added modifier “Beyond Pizza.” It also debuted a new logo and redesigned its website around this same time. Today, there are over 450 Cicis restaurants in 32 states.