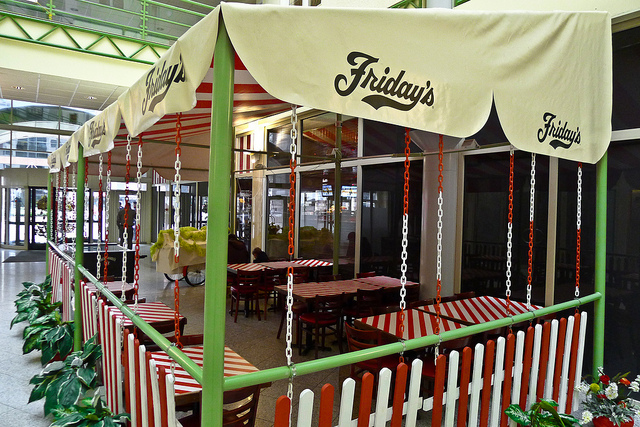 15 Things You Need to Know About the TGI Fridays Franchise

1.  In late August, TGI Fridays announced that it had been testing new technology and services, such as bar-top tablets and personalized TV services, in mock restaurants. With these new services, customers will be able to order their drinks at one of the tablets stationed around the bar and use their smartphones to take a photo of one of the restaurant’s TVs and have the sound from whatever is on play through their phone.

2.  Fridays says that it is looking for ways to “instill more loyalty among smartphone-toting consumers.” TGI Fridays’ CIO and VP for strategy and brand initiatives Sherif Mityas said, “How does Fridays play in that world and be part of the consideration set that Fridays is cool again and connected to me? And are they the place I want to eat somewhere and have a drink or stay home and have it delivered? That’s the next frontier for us.”

3.  Since Mityas joined the company over a year ago, the brand has been trying to see which digital services will resonate with customers. After Mityas became CIO, Fridays launched a new mobile app that allows customers to order online, pay at the table, and collect points for purchases and redeem them for rewards.

4.  The company has also joined in on the latest trend of using chatbots. TGI Fridays has been working with chatbot specialist Conversable and has rolled out chatbots on Facebook Messenger and Twitter with a chatbot built for the Amazon Echo launching sometime in October. In November, the brand will be releasing a chatbot for General Motors’ OnStar in-car service so people can order on the go.

5.  All of these new technologies are being supported by the Microsoft Dynamics CRM system, which collects the transaction data, as well as artificial intelligence and machine learning software that helps inform personalized recommendations based on customers’ behavior and purchase history.


6.  With this system, TGI Fridays is able to get consumers to re-engage by sending them messages and offers that relate to their purchase history. Mityas said that the experiment has yielded a 70 percent click-through rate.

7.  In late April, TGI Fridays appointed Aslam Khan as the company’s new CEO. Khan is an industry veteran and most recently served as chairman of multi-brand franchise company Falcon Holdings, LLC (a company he founded in 1999) of Westlake, Texas. Falcon Holdings is the largest franchisee of Church’s Chicken and also operates Hardee’s, Carl’s Jr., Long John Silver’s, and Picadilly Cafeterias.

8.  Khan said that his strategy as TGI Fridays’ new CEO is to “put people first.” He will work with Stephanie Perdue, who joined TGI Fridays in February as Chief Marketing Officer, to hone the menu and marketing message. He also said that he wants to focus on upgrading the quality of food and service at TGI Fridays.

9.  In February, TGI Fridays became the latest chain restaurant to announce that it had plans to eliminate fast-growth chickens from its restaurants by 2024 as a commitment toward bettering the welfare of food chickens. The company said that it is “committed to working with [its] vendor partners across [its] entire supply chain to make improvements” and that it would also be making changes to the seafood, pork, and beef that it uses.

10.  TGI Fridays will shift to using chicken breeds approved by Global Animal Partnership (GAP), use suppliers in accordance with GAP’s standards for space and improved environments, and source chickens that have been killed utilizing the humane controlled-atmosphere gassing system over the next seven years. The brand will also be moving toward using cage-free eggs by 2025.

11.  The first TGI Fridays was opened in 1965 by Alan Stillman in New York City. At the time, Stillman hoped that opening a bar would help him meet women (he unintentionally created one of the first singles bars). He wanted to open a spot that recreated the atmosphere of a cocktail party in a public setting.

12.  This first location featured many of the things that would become staples of the Fridays’ brand – the red and white striped awning and the TGI Fridays staff singing happy birthday to customers on their birthday.

13.  Stillman began franchising TGI Fridays two years after opening the first location, and in 1971, Daniel R. Scoggin acquired the rights to eight major cities. The next year, Scoggin opened a more family-friendly version of TGI Fridays in the suburbs of Dallas, Texas and Stillman was impressed by Scoggin’s success. Stillman merged his locations with Scoggin’s franchise to form T.G.I. Fridays, Inc., with Scoggin serving as the company’s CEO for the next 15 years.

14.  The company was sold to Carson Companies in 1975. Stillman left the company, but retained ownership of the original location, which closed in 1994. Today, TGI Fridays is owned by a unit of Sentinel Capital Partners and TriArtisan Capital Partners. There are now over 900 locations around the world.

15.  TGI Fridays did not rank on Entrepreneur’s annual Franchise 500 list in the last decade.

Next post: FDD Talk 2017: What You Need to Know About the i9 Sports Franchise Opportunity (Financial Performance Analysis, Costs and Fees)