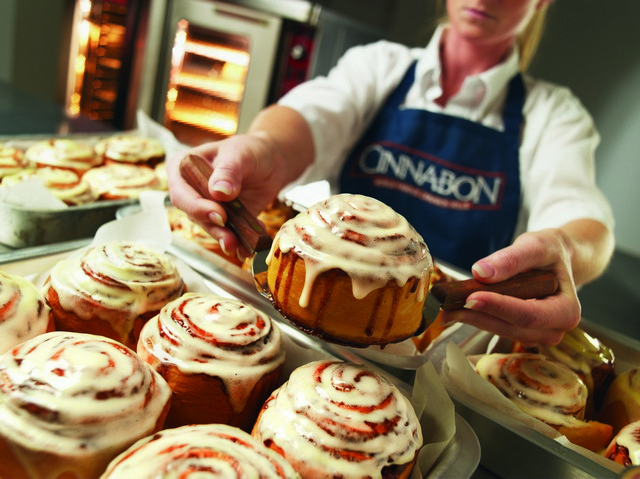 14 Things You Need to Know About the Cinnabon Franchise

1.  To kick off the summer season, Cinnabon launched a new line-up of its frozen blended drinks called Chillattas. The brand reformulated its signature line of drinks, making them creamier and richer in flavor, with flavors such as Signature Cinnamon Roll, Strawberries & Cream, Oreo Cookies & Cream, and Double Chocolate Mocha (made with Ghirardelli Chocolate). Cinnabon also released a seasonal summer flavor, Peaches & Cream.

2.  Jill Thomas, Vice President of Global Marketing for Cinnabon, said that the Chillattas provide the brand with “a new and exciting opportunity to make [its] mark in the world of beverages.”

3.  To celebrate the arrival of the new line of Chillattas, Cinnabon “froze” its website on June 19 and invited customers to virtually scrape the icy frost off their device’s screen for a chance to win prizes, including buy one get one free Chillatta, Cinnabon swag, and even free Cinnabon for a year.

4.  The brand even used Twitter and Instagram “influencers” to promote the new drinks. To pick the fan favorite flavor, each influencer was assigned a Chillatta flavor based on their personality and asked to encourage their followers to vote for the flavor they were assigned.

5.  From May 6 to 12, Cinnabon celebrated its annual National Nurses Week giveway. During those dates, participating locations offered nurses who presented their medical ID badge their choice of a free Cinnabon Classic Roll, Minibon, or a four count of its newest treat, BonBites.


6.  Cinnabon first partnered with The Daisy Foundation, an organization that was created to give thanks to nurses for the compassionate care they provide, in 2000. According to Joe Guith, President of Cinnabon, the brand has given away over a million cinnamon rolls since its first National Nurses Week.

7.  Since the very first episode of AMC’s Better Call Saul, Cinnabon has been featured in the show numerous times as the titular character’s undercover persona is a Cinnabon bakery manager named Gene.

8.  Prior to the premiere of the third season, Cinnabon invited fans to unlock an exclusive sneak preview of the show by entering their email address on Cinnabon’s website, which also earned them an entry into the brand’s Better Call Saul Sweepstakes. Those who posted on social media using the hashtags #BetterCallSaul and #Sweeps received additional entries.

9.  The grand prize was a replica of Saul’s briefcase filled with an undisclosed amount of cash and some of the character’s personal belongings. The contest took place from March 30 to April 23, with the winner announced on April 24.

10.  In addition to the contest and season 3 sneak peek, participating Cinnabon bakeries hosted a BonBites giveaway for all customers who came in between 5 and 7 p.m. on April 10. Customers were able to snag a free four count of the BonBites. They were also invited to take a selfie with a life-sized cutout of Saul and share it on Facebook, Instagram, and Twitter for more entries to the sweepstakes.

12.  Throughout the rest of the 1980s and 1990s, Cinnabon expanded across the United States, Canada, and Mexico. By 1995 there were more than 300 locations in operation. Due to Cinnabon’s success, Restaurants Unlimited decided to make Cinnabon an independently-owned and operated company in 1996.

13.  Two years later, the company was sold to AFC Enterprises, Inc. for $65 million. Cinnabon was sold again in 2004 to FOCUS Brands, Inc. for $30.3 million with FOCUS Brands remaining as Cinnabon’s parent company today. There are currently over 1,300 Cinnabon locations around the world.

Previous post: FDD Talk 2017: What You Need to Know About the Baskin-Robbins Franchise Opportunity (Financial Performance Analysis, Costs and Fees)

Next post: FDD Talk 2017: What You Need to Know About the Salsarita's Fresh Mexican Grill Franchise Opportunity (Financial Performance Analysis, Costs and Fees)