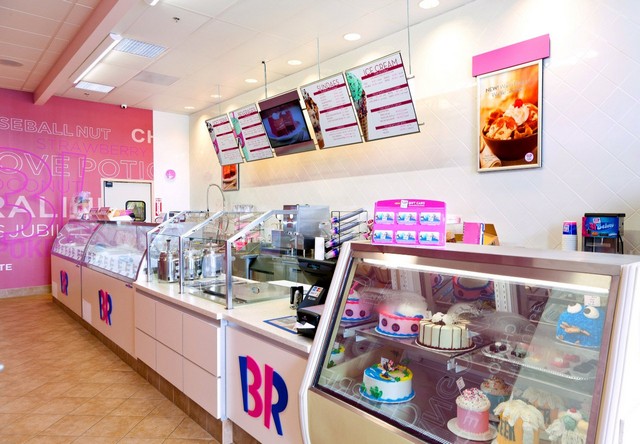 15 Things You Need to Know About the Baskin-Robbins Franchise

1.  On National Coffee Ice Cream Day (September 6), Baskin-Robbins announced that it had some upcoming special deals on its Cappuccino Blast, a blended coffee and ice cream beverage. On September 22, Baskin-Robbins held its first nationwide Cappuccino Blast sampling from 3 to 7 p.m., during which customers who came into participating locations received a free 3.5 oz. sample of the drink.

2.  To celebrate the fall season, Baskin-Robbins is offering a small Cappuccino Blast to customers for only $2.99 during the months of September and October.

3.  In addition to the Cappuccino Blast promotions, Baskin-Robbins released its seasonal Pumpkin Cheesecake ice cream and Quarterback Crunch, as well as the September Flavor of the Month, Belgian Waffle.

Partners with DoorDash for Door-to-Door Delivery Across the U.S.


5.  In early July, Baskin-Robbins announced that it had partnered with DoorDash, the mobile door-to-door delivery service that connects customers with restaurants in their area, to have Baskin-Robbins delivered straight to its customers.

6.  According to the press release, the service will be available at more than 600 Baskin-Robbins locations in 22 cities, including Atlanta, Georgia; Houston and Dallas, Texas; Chicago, Illinois; Las Vegas, Nevada; Los Angeles, California; New York City; Phoenix, Arizona; Seattle, Washington; and many more.

7.  To celebrate the launch of the service, Baskin-Robbins and DoorDash delivered Polar Pizza Ice Cream Treats to children’s hospitals in select cities on July 14. The children’s hospitals that received the Polar Pizzas are partners of the Joy in Childhood Foundation (formerly the Dunkin’ Donuts & Baskin-Robbins Community Foundation), whose mission is to bring joy to sick and hungry kids.

Plans to Remove Artificial Colors from U.S. Menus by End of 2018

8.  At the beginning of March, Dunkin’ Brands, Inc., the parent company of Baskin-Robbins and Dunkin’ Donuts, announced plans to remove artificial colors from its brands’ products in the U.S. The move is part of the company’s ongoing efforts to offer customers high-quality products and cleaner menu labels.

9.  Baskin-Robbins’ product development teams (as well as Dunkin’ Donuts’) have been working with their suppliers to eliminate synthetic colors from the company’s food and beverages and replace them with naturally sourced colors by the end of 2018. Baskin-Robbins will remove the synthetic colors from its ice cream sold both in store and in the quarts and pints sold at retail locations, as well as its syrups, sauces, sprinkles, and beverages.

10.  Supplier-branded ingredients produced by other companies (such as Oreo and NABISCO) that are used as toppings, ice cream inclusions, or decorative elements will be exempt from the change. The company also says that it may take longer to find replacements for the decorative elements on its cakes.

12.  The brand’s signature “31 Flavors” slogan and iconic pink and brown polka dots came from the Carson-Roberts advertising agency in 1953. Over the next two decades, Baskin-Robbins would continue to expand in the U.S. and in the 1970s, the brand opened its first international locations in Japan, Saudi Arabia, South Korea, and Australia.

13.  Baskin-Robbins was owned by its founders until 1967 when it was acquired by the United Brands Company. It was then sold to British food company, J. Lyons and Co. in 1973. J. Lyons and Co. went through a few mergers and eventually became Allied Domecq, which owned Dunkin’ Brands, Inc., Baskin-Robbins’ parent company.

14.  Dunkin’ Brands, Inc. is its own company today and it still owns Baskin-Robbins as well as Dunkin’ Donuts. Baskin-Robbins has continued to grow exponentially over the years and today it is considered the world’s largest ice cream shop chain with nearly 8,000 locations around the globe.

Next post: FDD Talk 2017: What You Need to Know About the Cinnabon Franchise Opportunity (Financial Performance Analysis, Costs and Fees)