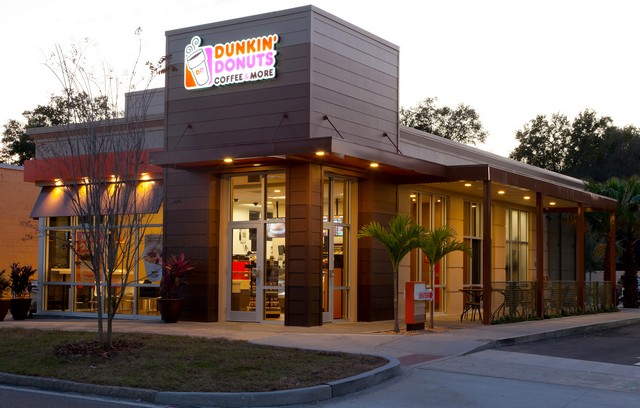 The chain opened in 1948 as Open Kettle to sell donuts and coffee; the name was changed to Dunkin’ Donuts two years later. Over time the locations evolved, with some selling the original donuts and coffee while others sold full breakfasts and other menu items. The menu was eventually standardized.

Dunkin’ Donuts is currently testing a possible rebranding as simply Dunkin’ in an effort to be seen as a coffee destination. Beverages make up 65 percent of the chain’s sales, while donuts only constitute 8 percent. Other foods make up 27 percent of sales, leaving plenty of room to focus on breakfast alongside the success of coffee and other beverages.

We’ve organized the Dunkin’ Donuts breakfast menu from least calories to most so you can look for what’s healthy or what’s hearty, or something in between.

If a donut is more than you bargained for at breakfast, you might like Dunkin’ Donuts’ Munchkins, aka donut holes. One Munchkin has 60-90 calories, and the treats range in carbs from 5-12g each (that doesn’t sound like a lot of calories and carbs, but if you imagine eating a bag of mini donuts at a carnival, it’s a little scary).

The chewy and slightly crisp English muffin, perhaps spread with a bit of butter, peanut butter or jelly (don’t forget to factor additional calories), is a nice morning wake-up with a cup of coffee or part of a larger breakfast. You might even try dipping it in the coffee if you’re inclined to put cream in your morning cup. The English muffin has 140 calories, 30g carbs, 4g protein and 7g fiber.

I get hungry just thinking about hash browns (with a side of butter, of course … no ketchup for me, but I know people who smother their hash browns with ketchup). These particular hash browns are lightly seasoned golden-brown nuggets, sold in a package of six. At 140 calories you’ll get 17g carbs and a wee bit of protein (2g). Hash browns are often a side dish, but as nuggets can easily be eaten as a snack.

Now we’re getting into something a little heartier. These breakfast wraps combine eggs and cheese (and your choice of meat, if desired) in a flour tortilla. The meatless egg version has only 180 calories and 13g carbs while delivering 8g protein, while a low-cholesterol egg white veggie version has 190 calories, 14g carbs and 11g protein.

These are ideal for people watching carbs who want a light breakfast with lots of flavor.

When I think donuts, I tend to think 500 calories, so I was surprised to see that none of the donuts here reaches that calorie level and that most are below 400 calories. This makes me want to rationalize eating donuts! I mean, 230 calories and 22g carbs for a sugared raised donut, which is one of my favorites anyway? Sweet. That’s the donut here that’s the lowest in calories. The Cinnamon Guava Donut has 250, and several varieties have 260 calories, including the basic Glazed Donut.

Among basic popular donuts, you’ll find the Old Fashioned Cake Donut at 290 calories and the Powdered Donut at 320. The highest in calories, nudging near that 500 mark at 490, is the popular Bismark that’s so hard to resist when it shows up in a box of donuts in the office. This no-hole donut, usually powdered with a fruit filling, has 490 calories and 62g carbs, and if you bother looking for protein in a donut, this one has 5g.

The Egg & Cheese is a simple breakfast item, just like it sounds, just egg and cheese inside, but the outside brings more variety and determines the calorie count. We’ll start with the English muffin, the lowest-calorie choice. This sandwich is just 300 calories, along with 32g carbs, 13g protein and 7g fiber.

The other three choices are 470, 480 and 490 calories, respectively: on a bagel, the sandwich has 67g carbs and 20g protein, the highest in each category. On a biscuit, you’ll get 37g carbs and 14g protein, and on a croissant, the counts are 40g carbs and 15g protein.

Dunkin’ Donuts offers a busy 300-calorie oatmeal that starts with a whole-grain blend of rolled oats, barley and rye. It’s sweetened with sugar and brown sugar and has raisins, sweetened cranberries and golden raisins. As you might imagine with all that sugar and fruit, carbs are up there at 66g, but you’ll get a nice 5g fiber along with 5g protein. This is a good way to get up in the morning and get moving.

Bagels at Dunkin’ Donuts range from 310 to 390 calories and have 61 to 69 carbs each. You can get a surprising amount of protein from a bread product with the Whole-Wheat Bagel’s 13 grams and the Multi-Grain Bagel’s 15g. Both have 320 calories, and they contribute 7g and 8g fiber respectively. A Plain Bagel has 310 calories, 64g carbs and 11g protein.

The Veggie Egg White Flatbread is a good choice among healthy breakfast menu items. It starts with an egg-white omelette and adds diced red and green bell pepper, mushrooms, green onions and white cheddar, all wrapped in an oven-toasted multi-grain flatbread. It has 330 calories and 18g protein with 33g carbs.

I’d be more likely to go for the complexity of the Veggie Egg White Flatbread than the simple croissant, but the buttery flakiness of that light French delicacy is compelling and just 10 calories more. For 340 calories, you’ll get some protein (6g) and 37g carbs.

If your morning pick-me-up craving is on the sweeter side, Dunkin’ Donuts has muffins ranging from 410 to 590 calories. A Reduced Fat Blueberry Muffin has the lowest calories at 410 and has 7g protein and 75g carbs. On the other end of the list, at 590 calories, is the Coffee Cake Muffin, which has 7g protein and 87g carbs.

If donuts, Danishes and muffins aren’t your thing, the chain has other pastries to choose from, such as fritters, crullers and cookies.

I’m impressed to see turkey sausage on a fast-food menu; I think it’s the first time I’ve seen it. It’s a way for sausage to be a lower-calorie option instead of generally being the highest-calorie meat available, and turkey sausage is good enough that I’d bet some pork sausage lovers might not even notice the substitution.

I like pretty much any cured meat, including the turkey sausage just discussed, and with the range of breads offered by Dunkin’ Donuts, calorie-conscious diners can opt for the higher-calorie meat and a lower-calorie bread to keep the calorie count down for the Sausage, Egg & Cheese Sandwich.

Now we’re getting to the breakfast items for the heartier meat-lover appetites. The 630-calorie Angus Steak, Egg & Cheese features Angus steak and egg with American cheese on an oven-toasted bagel. You’ll get a big 34g protein, along with 5g fiber and 67g carbs, for this hearty tribute to red meat.

Also 630 calories is the Big N’ Toasted, a tall order that places two eggs, bacon and American cheese on two thick slices of Texas toast. Protein is at 29g and carbs at 43g. This is a different breakfast item because it’s not only on toast but is on substantially sized Texas toast.

Although the name is brilliantly evocative of coffee and donuts simultaneously and lends itself well to its testing the waters as simply Dunkin’, Dunkin’ Donuts offers much more than coffee and donuts. The chain’s connection to baking lends itself to offering multiple choices of breads for the Dunkin’ Donuts breakfast menu, which you don’t often find at a fast-food restaurant. This enables us to make more choices when it comes to taste, calories and nutritional content.