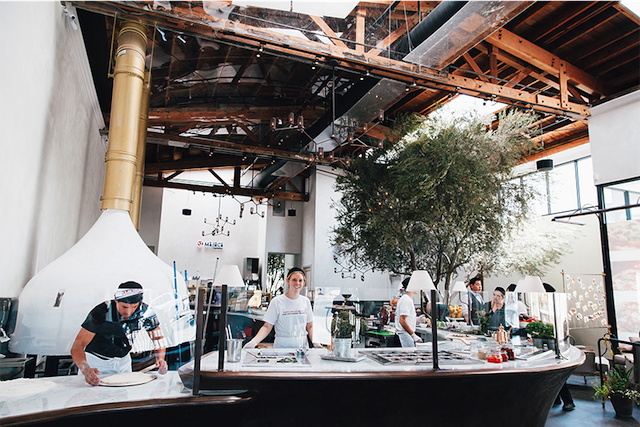 
1.  In early March, MidiCi released a press statement detailing its plans for future growth. At the time of the press release, MidiCi had opened three new locations in 2017 and signed 20 new franchise agreements. MidiCi said that it hopes to have hundreds of locations open across the U.S. within the next three years and that at least 25 new locations will be opened by the end of 2017.

2.  The company attributes its appeal to how unique it is from other fast-casual pizza franchises; it even invented its own category to describe its offerings, “fast-fine.”

3.  As MidiCi continues to open new restaurants around the country, the company says its long-term goal is to have 450 units opened by the end of 2025.

4.  Toward the end of 2016, Franchise Times Magazine published an article raising concerns over what happens when a franchise’s unit sales get far ahead of its openings. At the time of writing, MidiCi Neapolitan Pizza had sold 329 franchises but did not have a single franchised location open. As of August 2017, there are only about 12 MidiCi restaurants open for business.


5.  According to the article, Eric Riess, a partner with Lathrop & Gage in Clayton, Missouri, said he and other franchise attorneys are hearing from MidiCi franchisees who question the feasibility of building and operating a large pizza restaurant within the parameters laid out in MidiCi’s FDD.

6.  When questioned about his strategy of selling pizza franchises before having a restaurant open, Amit Kleinberger, the founder of MidiCi, said he felt secure because “MidiCi was not an overnight project; we spent years developing the brand.”

7.  Also at the time the article was published, Kleinberger promised that 27 MidiCi restaurants would be open by April 30, 2017, but this ended up not being the case. MidiCi is now saying that it will have at least 25 locations open by the end of this year.

8.  Several franchisees who were interviewed said that they were charmed by Kleinberger and MidiCi’s Discovery Days, where according to one franchisee, “The sales guys made buying a MidiCi sound so tempting, the amazing adventure of your life. They didn’t compare MidiCi to other pizza companies, but to Apple and Google.”

9.  Kleinberger has assured franchisees that MidiCi is doing well as the company “has no outside debt” and “is a well-oiled machine [that] has the capital to be where [it] needs to be.”

11.  At each location’s grand opening, MidiCi offered a free Margherita pizza to dine-in customers. The location in Fort Collins is owned by entrepreneur Frank Brewster and his wife Kim. The Brewsters were looking for their next business venture and fell in love with MidiCi’s concept. Frank Brewster said that they are excited to open MidiCi as “wood-fired pizzas are a hot thing right now.”

12.  MidiCi Neapolitan Pizza was founded in 2015 by Amit Kleinberger in Sherman Oaks, California and began franchising that same year. Kleinberger, who is also CEO of the frozen yogurt franchise Menchie’s, wanted to bring pizza to customers in an original way that “preserved the flavors, passion, process, history, and essence of Neapolitan style pizza.”

13.  MidiCi has positioned itself to fill the premium pizza franchise niche and believes that although its prices are higher than other pizza places, its high quality is worth it. Although MidiCi has sold over 300 units since it began franchising in 2015, there are currently only 12 locations open in the U.S.

14.  As a new franchise, MidiCi Neapolitan Pizza has not yet appeared on Entrepreneur’s annual Franchise 500 list.

Next post: Q&A with John Thomas, CEO of Pinch A Penny Pool Patio and Spa