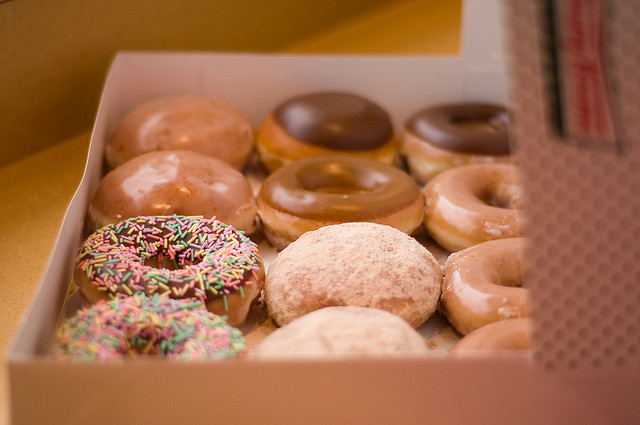 15 Things You Need to Know About the Krispy Kreme Franchise

1.  For the first time in the company’s history, the Original Glazed Doughnut was “eclipsed” by a chocolate glaze as a nod to the total solar eclipse that took place in the U.S. on Monday, August 21. The limited-time doughnut was available only on that day at participating locations in the U.S. and Canada.

2.  The special doughnut featured Krispy Kreme’s Original Glazed Doughnut smothered in a rich chocolate glaze. Customers who visited participating Krispy Kreme shops on the 21st were able to watch the doughnuts pass through a chocolate glaze waterfall instead of the traditional glaze.

3.  Jackie Woodward, Chief Marketing Officer of Krispy Kreme Doughnuts, said of the event: “The solar eclipse is a rare occasion providing a total sensory experience for viewers across the continental U.S. Chocolate will have the same effect as we introduce a first-time chocolate glazing of our iconic Original Glazed Doughnut.”


5.  Customers were also invited to share how they celebrated the doughnut’s birthday by posting pictures of the Original Glazed Doughnut using the hashtag #OriginalGlazed and tagging @krispykreme on Instagram and Twitter.

7.  NBA all-star Shaquille O’Neal celebrated the Original Glazed Doughnut’s 80th birthday by handing out doughnuts at a Krispy Kreme pop-up store in Times Square in New York City on July 14. O’Neal owns a Krispy Kreme store in Atlanta, Georgia and is a self-proclaimed member of the “Krispy Kreme family.”

8.  At the end of March, Krispy Kreme announced that it had opened its first location in Peru and that the shop, which is located in the capital city of Lima, is the brand’s 1,000th international location. The shop is the first of 24 planned shops for Peru according to a development agreement that Krispy Kreme signed with Agape Coral, SAC in 2015.

9.  The new shop is three levels and features two dining areas and a terrace. To celebrate the grand opening, the first 300 customers in line received a commemorative t-shirt. In addition, the first 12 people in line won a dozen Original Glazed doughnuts every week for a year, while guests 13 to 300 won a dozen Original Glazed doughnuts each month for a year.

10.  Krispy Kreme was founded in 1937 by Vernon Rudolph in Winston-Salem, North Carolina. Rudolph initially sold his doughnuts to convenience stores, but he did sell hot doughnuts to customers who came during production time between midnight and 4 a.m.

12.  Franchising began in 1947. Krispy Kreme became a staple of the Southeast region of the United States, but eventually expanded into other areas of the country. In 1976, Krispy Kreme became a wholly-owned subsidiary of Beatrice Foods of Chicago, Illinois. In 2000, the company went public after a successful IPO.

13.  In May 2016, JAB Beech, a German investment firm, made an offer to purchase the company for $1.35 billion that would make the company privately-owned again; the transaction closed at the end of July 2016.

Next post: FDD Talk 2017: What You Need to Know About the Toppers Pizza Franchise Opportunity (Financial Performance Analysis, Costs and Fees)