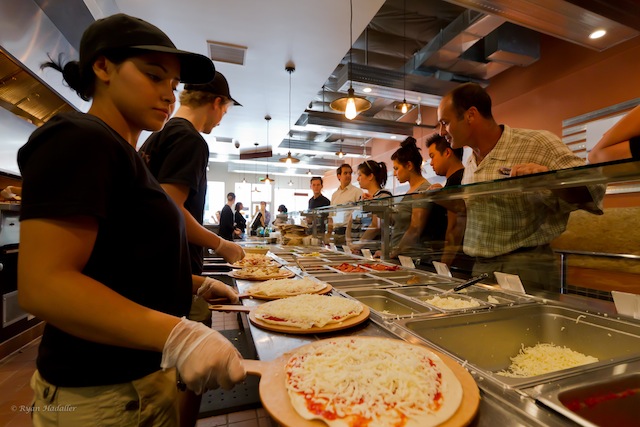 11 Things You Need to Know About the PizzaRev Franchise


1.  In late May, PizzaRev announced that it had formed a strategic partnership with Cleveland Avenue, LLC, a Chicago-based accelerator that strategically invests in innovative, consumer-focused restaurant, food, and beverage concepts. Cleveland Avenue also became a majority investor in PizzaRev.

2.  Don Thompson, founder and CEO of Cleveland Avenue (and former CEO of McDonald’s), said that his company is “delighted to join forces with PizzaRev and begin working together toward achieving long-term sustained success.” Thompson also says that Cleveland Avenue was drawn to PizzaRev because of its potential for scale and growth.

3.  April 20, 2017 marked PizzaRev’s 5th Anniversary and to celebrate this milestone, customers who visited participating locations that day received a $5 voucher with any purchase. Customers were able to use the vouchers between April 21 to May 31 to take $5 off a purchase of $10 or more.

4.  As a bonus, each voucher was made from recycled paper embedded with basil seeds that could be planted. To help people with planting and taking care of the basil, PizzaRev provided care instructions on its website.

5.  At the beginning of May, PizzaRev launched its “Be Revolutionary” contest to celebrate the brand’s growth and progress over the last five years. To enter the contest, customers were required to submit an answer to the question “What does it mean to Be Revolutionary?” via Instagram, Facebook, or Twitter, using #BeRevolutionary, for a chance to win free pizza for life.

6.  PizzaRev also awarded weekly prizes including free pizza through the PizzaRev mobile app, and PizzaRev swag. The contest ran from early May through the start of July. The winner, which was Hailey Pointer, was revealed near the end of July. Pointer’s entry said that she plans to start a clothing line with her siblings that will give back to local animal shelters.


8.  Nicholas Eckerman, co-founder and CEO of PizzaRev, said that the Thai Chicken pizza is unlike anything the company has ever had on its menu and that it “will surprise and delight” PizzaRev’s fans. The pizza is available for a limited time at all PizzaRev locations and customers can add the Thai sizzle sauce or sweet chili chicken to any Craft Your Own pizza.

10.  The company’s name, which is short for “Pizza Revolution,” stems from the idea of empowering customers to build their own pizza. PizzaRev began franchising in 2013 when it opened the first location outside of Los Angeles county in Oxnard, California. The first international location opened in 2016 in Monterrey, Mexico. Today, there are nearly 50 PizzaRev locations in the U.S. and Mexico.

11.  PizzaRev has only been franchising since 2013 and has yet to appear on Entrepreneur’s annual Franchise 500 list.

Company-Owned Restaurants Included in This Item

Next post: FDD Talk 2017: What You Need to Know About the Hand and Stone Massage and Facial Spa Franchise Opportunity (Financial Performance Analysis, Costs and Fees)