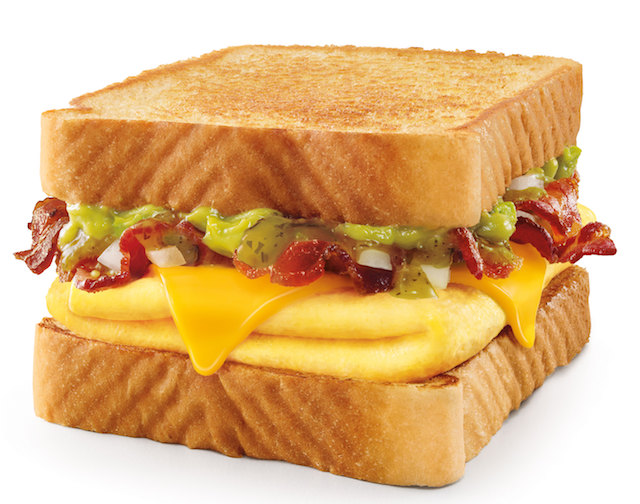 If you don’t feel like getting out of the car when it comes to a fast-food breakfast, SONIC has you covered, literally. The fast-food drive-in restaurant (aka SONIC Drive-In) has carhops who will do the legwork for you while you relax beneath a covered stall and peruse the SONIC breakfast menu. You can also go through the drive-through or enjoy a leisurely morning meal on the patio.

If you’re a breakfast-for-dinner person, you’ll appreciate that SONIC serves its breakfast menu all day. SONIC breakfast hours generally start at 6 a.m. and end at closing. The minimum hours at every franchise are 6 a.m. to 10 p.m.

Below, we’ve listed everything on the breakfast menu, ranked by calories, so you can plan that most important meal of the day.

For lighter appetites, the Jr. Breakfast Burrito is the lowest-calorie item on the SONIC breakfast menu at 290 calories. It’s a decent meal at 12g protein and 23g carbs, combining sausage, fluffy eggs and cheese on a warm flour tortilla.

SONIC doesn’t shy away from breakfast calories, whether it’s a loaded burrito or a sweet treat like the Cinnabon Cinnasnacks. You can shave some of the potential calories by ordering the Cinnasnacks without cream cheese frosting. This version, featuring sweet cinnamon roll filling within warm, buttery mini pastries, has 340 calories and 44g carbs for three treats and 570 calories and 73g carbs for five, so even without the frosting you should be able to cure your sweet tooth.

You won’t get as much protein as you’d get with the savory meals (the three-pack has 7g, while the five-pack has 11g), but it’s still pretty decent for a sugary snack.

You may be looking for something just a little more substantial than a junior-sized burrito, yet less sugary than the Cinnabon Cinnasnacks, and the Breakfast Burrito easily fills that void and gives you choices as well. This savory handheld meal is available with ham, bacon or sausage, along with scrambled eggs, melty cheddar cheese, with everything tucked in a flour tortilla.

There’s not much difference among those choices in terms of calories, protein and carbs. The burrito has 460 calories for ham, 490 for bacon and 500 for sausage. Protein ranges from 23-27g and carbs from 36-37g.

Somehow, I’ve spent much of my life with French toast as my go-to restaurant breakfast but have not tried French Toast Sticks. I’ll have to remedy that soon. I already often eat French toast as finger food (I don’t like syrup, and it’s easy to hold a piece of French toast with butter), so I’m ready for these crispy sticks. You’ll get five sticks for 500 calories without syrup and 590 with syrup. Either way, they have 4g protein; carbohydrates are at 71g with syrup and 49g without.

Croissant sandwiches have been a favorite of mine for many years. I love bread in general, and I especially love the flaky, buttery, light goodness of croissants. At SONIC, the CroisSONIC Breakfast Sandwich comes with ham (500 calories), bacon (580 calories) or sausage (640 calories), along with a fluffy egg and melted American cheese, all on a buttery croissant. Carbs are consistent at 32g for each variety, with protein ranging from 24-26g.

My only problem with the CroisSONIC is that I can’t pronounce it properly. I keep saying CroisSONwich! Then again, “CroisSONwich” is a portmanteau of “CroisSONIC Breakfast Sandwich,” so I guess it’s all good. (Although CroisSONwich also probably too closely resembles the Croissan’wich, whose home is on the Burger King breakfast menu.)

One of the greatest things about the Breakfast Toaster is what holds it all together. Thick slices of Texas toast provide a lovely backdrop for fluffy eggs, melty cheese and your pick of ham, bacon or sausage. Texas toast is delicious even just toasted and buttered, so I’m sure this would be pretty fabulous. As a lover of both Texas toast and grilled-cheese sandwiches, I’ll put the Breakfast Toaster on my list of things to try.

The SuperSONIC Breakfast Burrito is a mouthwatering combination of sausage, scrambled eggs, melty cheddar cheese, golden tots, diced onions, tomatoes and jalapenos on a flour tortilla. I’m liking the spice with this one; there’s a lot of flavor even without the jalapenos, but that addition really drives up the payoff. The burrito has 600 calories, 24g protein and 49g carbs, along with 2,070g sodium.

If you’re looking for a morning boost of energy, these soft, warm pastries with cinnamon-roll filling and cream-cheese frosting might be your breakfast pick. If you paired them with coffee, you could be unstoppable … until the carb crash.

It seems appropriate that the ultimate item on this list is the Ultimate Meat & Cheese Breakfast Burrito. This hearty burrito features bacon, sausage, golden tots, scrambled eggs and cheddar cheese, wrapped up in a warm flour tortilla. At 860 calories, you’d start out your day in a big way, with 29g protein, 48g carbs and 2,400g sodium. And since SONIC breakfast hours are all day long, you could choose this for supper instead and still have a hearty meal.

You’re not going to find much in low-calorie items on the SONIC breakfast menu, but on the other hand, you’re also not going to find super-high-calorie choices, like the hefty 1,080-calorie Breakfast Burger on the Carl’s Jr. breakfast menu. Most of SONIC’s offerings are pretty reasonable choices (maybe not so much the Cinnabon treats, but I think we all know what we’re getting ourselves into when we order sweet pastries).

I also like that customers can choose the meats they want for most sandwiches or burritos and that the nutritional information is really easy to find for all variations.