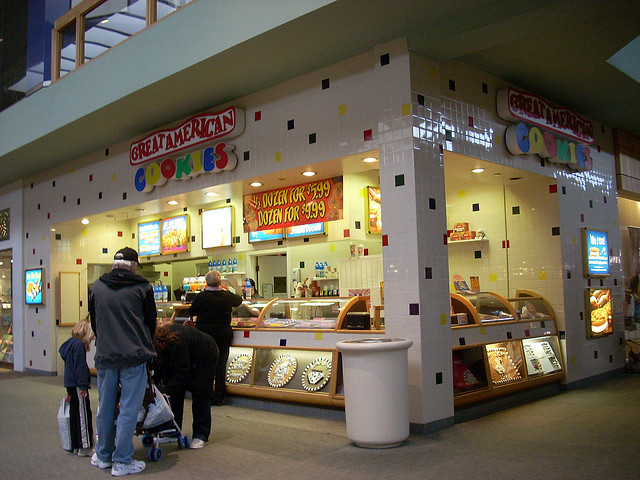 1.  Great American Cookies celebrated its 40th anniversary on June 22 by selling regular cookies for 40 cents a piece throughout the day. There was a limit of one dozen cookies per person at the 40-cent price. In addition to the 40-cent cookies, participating Great American Cookies locations gave away a free cookie cake, which was decorated with “Happy Birthday” in chocolate and white icing, to the first 40 customers.

2.  Earlier in the year, on Tax Day (April 18), Great American Cookies continued its annual Tax Day tradition by giving away a free Birthday Cake Cookie to customers at participating locations. This was the fifth year that Great American Cookies gave away free cookies on Tax Day. The company chose its Birthday Cake Cookie to give away in anticipation of its birthday celebration later in the year.


4.  In late March, the Great American Cookies store at Dolphin Mall in Miami, Florida celebrated its grand opening by holding the “Great American Cookies Celebration Spree.” The location gave away a free cookie cake to the first 100 customers, with each person receiving a cookie cake with a random celebration. Also, every customer that came into the Dolphin Mall store on the day of the grand opening received a free regular cookie.

5.  Great American Cookies was founded in 1977 by Michael Coles and his business partner Arthur Karp in Atlanta, Georgia. Coles and Karp each invested $4,000 to develop a business selling gourmet cookies using a family recipe passed on to Karp from his grandmother.

7.  Coles sold Great American Cookies to Mrs. Fields Famous Brands in 1998. The company was sold again in 2008 to NexCen Brands Inc., whose brand portfolio included Marble Slab Creamery, MaggieMoo’s Ice Cream and Treatery, and Pretzelmaker. Since 2010, this portfolio of brands has been owned by Global Franchise Group, LLC.

8.  Great American Cookies began franchising a year after the first store opened and today there are over 350 locations in the U.S. and internationally.

Previous post: FDD Talk 2017: What You Need to Know About the BurgerFi Franchise Opportunity (Financial Performance Analysis, Costs and Fees)

Next post: Everything on the SONIC Drive-In Breakfast Menu, Ranked by Calories