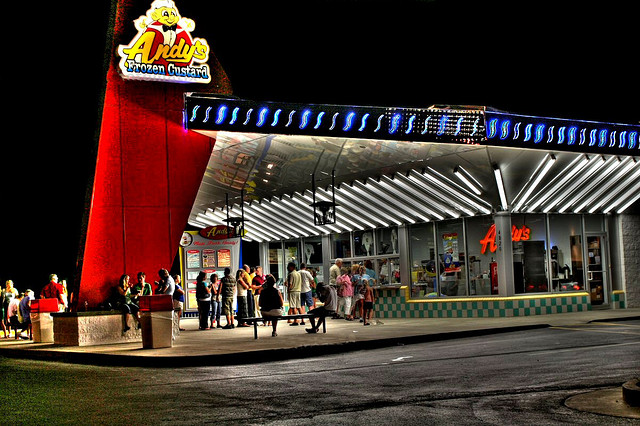 1.  In early June, the company celebrated a milestone by opening its 50th location in Fort Worth, Texas. The location is the seventh Andy’s Frozen Custard store in the Dallas, Texas area and the first in North Fort Worth.

2.  Andy Kuntz, President of Andy’s Frozen Custard, says that while 50 is a big number, the company is “looking forward to the day when there are ten times as many Andy’s to serve the public.”

3.  Although Andy’s Frozen Custard has been in business for over 30 years, the company’s growth has remained moderate. But in a 2016 interview, President Andy Kuntz said he plans to grow the chain to 75 locations by the end of 2017. According to Kuntz, the company “wants to be the Chick-fil-A of frozen custard” where “quality of product and quality of service is what wins.”

5.  Kuntz disclosed plans to move Andy’s headquarters to a much larger space in a renovated historic building in downtown Springfield, Missouri. The new space will feature a 14-foot custard cone suspended from the third floor ceiling that is visible from the first floor entryway. The offices will be located on the top two floors along with a kitchen and workout facility for employees to use.

7.  Other seasonal flavors, which are available during specific times of the year, include: Pumpkin Pie Concrete, Andy Nog Shake, Cookie Casanova Sundae, Candy Cane Concrete, Blueberry Concrete, Strawberry Shortcake Sundae, and many more items that make use of seasonal ingredients.

8.  Andy’s Frozen Custard was founded in 1986 by John and Carol Kuntz in Osage Beach, Missouri. The business was named after the Kuntzes’ son, Andy. The couple wanted to bring frozen custard to their home state of Missouri after tasting it for the first time in Wisconsin. The Kuntzes learned everything they could about running a frozen custard shop from Leon and Doris Schneider, who had owned a Milwaukee frozen custard shop since 1942.

9.  After expanding to Springfield, Missouri, Andy Kuntz and his wife Dana, started working at the shop to learn everything about the business. In 2008, after John Kuntz died, Andy took over the company and continues to run Andy’s Frozen Custard with his wife and mother.

10.  Andy’s Frozen Custard began franchising in 2005 and today, there are 50 shops in 9 states with more opening soon.

11.  Although Andy’s Frozen Custard has been operating for over 30 years, the company has not focused on growth until very recently and has yet to appear on Entrepreneur’s annual Franchise 500 list.