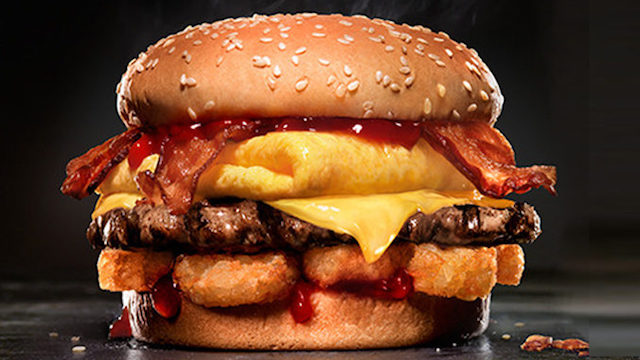 Carl’s Jr. may be flirting with the notion of all-day breakfast, or perhaps the fast-food chain is just bridging the gap between breakfast and lunch. In February 2017, the Breakfast Burger, which pairs a lunchtime burger with a breakfast egg on a bun, expanded beyond the Carl’s Jr. breakfast menu and became available all day.

The chain launched the Breakfast Burger in 2004. It says it was the first major chain to place an egg atop a hamburger. Carl’s Jr. sells its burgers during breakfast, so introducing a burger-and-egg combo was a way to have a burger as a specific breakfast item.

It bridges the meal gap differently than the Jack in the Box breakfast menu, which expanded to make room for a “Brunchfast” menu of items a little more substantial but still including breakfast favorites like eggs.

Whether or not breakfast items eventually become available all day, Carl’s Jr. breakfast hours currently normally run from 6 to 10:30 a.m. To help you pick out something satisfying to start your morning out right, we’ve organized the breakfast menu by calories, from lowest to highest.

Made From Scratch Biscuit, 290 Calories

As good as this biscuit is as the basis for a breakfast sandwich, it can also be a simple but satisfying side or snack. If you like peanut butter, you can add some protein to the 6g already present.

Hash browns are a favorite of mine for any meal, and I don’t think I’m alone in that regard. Carl’s Jr. Hash Rounds give you a simple finger-food version of the popular restaurant hash browns. Made fresh daily, they’re nice as a breakfast side, a snack, or a mini-meal.

At 350 calories, 3g protein and 32g carbs, the small size seems reasonable, as does the only-slightly-larger medium size, which has 390 calories and 36g carbs and remains the same at 3g protein. But the large size zooms up to 560 calories and 52g carbs, while delivering 5g protein. This size may be best to share with a friend.

Carl’s Jr.’s Biscuit ‘N’ Gravy elevates the Made From Scratch Biscuit to heavenly bliss as the biscuit is smothered in a sausage country gravy. This is a lovely comfort food, with the dense biscuit softened by that creamy savory gravy that goes so well over a biscuit (or with chicken tenders). I often like to add a sausage patty to anything that involves sausage gravy (sausage goes with sausage, right?). At 430 calories, you’ll get 9g protein and carbs will rise to 50g.

The lowest in calories of the breakfast-in-a-biscuit offerings is the Bacon, Egg & Cheese Biscuit, which has 480 calories, 18g protein and 38g carbs. Bacon, a folded egg and American cheese are tucked into a Made From Scratch Biscuit for a tasty, well-balanced sandwich that provides a good amount of protein and keeps the carbs fairly low and the calories under 500.

I love a grilled cheese sandwich, and now and then I like it with ham, but I’ve never tried it with egg. The Carl’s Jr. Ham Grilled Cheese Breakfast Sandwich places smoked ham, American and Swiss cheeses and a folded egg atop sourdough bread. This hearty sandwich has 500 calories and delivers 34g protein along with 43g carbs.

If I had a dollar for every time I’ve heard “bacon makes everything better,” I could buy a whole lot of bacon. The Bacon Grilled Cheese Breakfast Sandwich combines bacon, American and Swiss cheeses and a folded egg on sourdough bread for 550 calories, 34g protein and 43g carbs. This substantial handful will start your day out on a fulfilling and tasty note.

We move on to breakfast burritos (while still staying with bacon) with the 570-calorie Bacon & Egg Burrito. A warm flour tortilla is stuffed with scrambled eggs, two strips of bacon, and shredded jack and cheddar cheeses. Protein is at 29g and carbs at 32g with this tasty wrapped-up breakfast.

The Sausage, Egg & Cheese Biscuit features a folded egg, a sausage patty and American cheese on a biscuit. A nice peppy combo to start your day with, this breakfast menu item has 610 calories, along with 20g protein and 38g carbs. And while bacon lovers can point out that the Bacon, Egg & Cheese Biscuit is considerably lower in calories at 480, at least I can say the sausage version has 2g more protein.

For those who like a plate of steak and eggs for breakfast, the Steak & Egg Burrito is a handheld fast-food version of the classic indulgent breakfast. You’ll get scrambled eggs, char-broiled steak, pepper jack cheese, shredded jack and cheddar cheeses and fresh salsa in a warm flour tortilla. At 630 calories, this burrito has 35g protein and 37g carbs.

Of the three meats available for the Grilled Cheese Breakfast Sandwich, the only one I haven’t tried with a grilled cheese sandwich is sausage, my favorite breakfast meat. The Sausage Grilled Cheese Breakfast Sandwich piles a tangy sausage patty, Swiss and American cheeses and a folded egg on sourdough bread. The combination has me curious to sample this sandwich, which has 660 calories, 34g protein and 43g carbs.

As a lover of sausage gravy, I’m intrigued by the Big Country Breakfast Burrito. Sausage gravy smothers scrambled eggs, sausage, ham, bacon bits, hash brown nuggets and shredded jack and cheddar cheeses within a warm flour tortilla. I don’t know if I could handle such a powerful burrito first thing in the morning, but I’d try! This 660-calorie burrito has 26g protein and 45g carbs.

That Breakfast Burger mentioned in the beginning comes in at 730 calories for a single patty (look to the end for a double-patty version if you’re up for that) with a hefty 37g protein and 47g carbs. This meal-bending burger stacks a ground-beef patty, a folded egg, bacon, American cheese, a layer of hash brown nuggets on a sesame-seed bun, along with ketchup. If you’re a fan of ketchup on eggs, that might entice you, but it makes me frown.

Besides, from the photo of this menu item, it looks like ketchup is mostly for the hash browns. I like ketchup on one thing: corn dogs. I usually have mustard on a burger, but I’m not sure how mustard would go with eggs. Maybe this burger is fine without a condiment, but for sure I’d order it without ketchup.

The 760-calorie Loaded Breakfast Burrito stuffs scrambled eggs, ham, bacon bits, hash brown nuggets, shredded jack and cheddar cheeses and fresh salsa into a soft flour tortilla. You’ll notice it lacks the sausage and sausage gravy of the Big Country Breakfast Burrito but has 100 calories more; I suspect you’ll get more of everything else in this hungry diner’s handheld breakfast. Protein is at 33g and carbs at 46g.

If you’re really hungry, you might want to go for the gigantic Monster Biscuit, which piles a thick Made From Scratch biscuit with bacon, a sausage patty, two folded eggs and Swiss and American cheeses. If you can get this tall stack of food in your mouth, you’ll get 32g protein and 39g carbs for 820 calories.

You thought piling a hamburger patty and a folded egg on a bun was a lot of food, right? How about TWO hamburger patties with that egg joining the bacon, American cheese, hash brown nuggets and ketchup on the sesame-seed bun? You’ll get a whopping 1,080 calories for this one.

I know breakfast is supposedly the most important meal of the day, but for anyone who’s counting calories, there’s not much room for the later two meals. Maybe you’ll be so full after this one that you’ll eat watermelon and cucumbers the rest of the day. Protein is huge at 59g, and the double-patty Breakfast Burger has 68g carbs.

Regardless how the Breakfast Burger does with its all-day launch in 2017, Carl’s Jr. already has a decent mix of innovation and tradition on the Carl’s Jr. breakfast menu that should please those who want familiar tastes, as well as those who aren’t afraid to put burgers, eggs and hash browns (and even ketchup) in the same bun.

I’d like to see some lighter breakfast fare, such as yogurt, a fruit cup, a meatless egg-and-cheese sandwich, but Carl’s Jr. isn’t really known for food on the lighter side (on the flip side, the chain seems to have fewer carbs than a lot of other fast-food chains). These are hearty offerings, and they’re offered simply: a few biscuit sandwiches, a few grilled sandwiches on sourdough bread, a few burritos, and a couple of burger-egg-hash brown concoctions.

Keeping the categories to a minimum makes it possible for Carl’s Jr. to offer 15 breakfast items while not taxing workers or customers with menu madness.