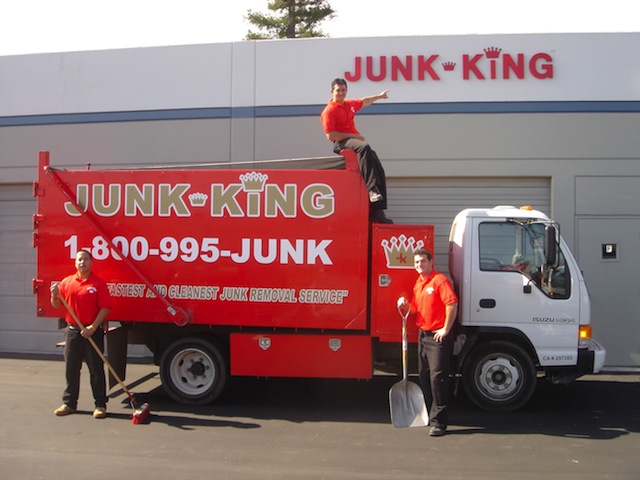 14 Things You Need to Know About the Junk King Franchise

2.  According to Oakley, the demand for high quality junk removal services continues to grow and he is confident that he and his team will make a difference in the cities and neighborhoods in the Temecula area. Michael Andreacchi, CEO and co-founder of Junk King Franchise Systems, says he has no doubt that Oakley will be successful as Oakley has the passion and experience to expand the Junk King brand into the new territory.

3.  At the end of May, entrepreneurs Kevin Schultz and Joe Howard III opened a Junk King franchise in Grand Rapids, Michigan, which is the first Junk King location in the West Michigan area – there are two other Junk King locations in Michigan (one in Detroit and the other in Ann Arbor).

4.  Schultz and Howard were drawn to the company’s business model of recycling, reusing, and repurposing 60 to 70 percent of the materials collected. According to Schultz and Howard, a Grand Rapids non-profit is already using the appliances and furniture that they have collected to create new opportunities for families who are trying to get back on their feet.

Franchisees Give Back to Their Local Community

5.  Julius and Jacqueline McQueen, Junk King franchisees in Fishers, Indiana, announced at the beginning of the year that they were planning on launching an initiative called Fill the Truck later this year as a way to help their local community.

6.  Since opening their Junk King franchise about a year ago, the McQueens have participated in various giving-back campaigns around Hamilton County such as helping Sotheby’s Real Estate collect items to give to fire victims, and donating recycled items to Goodwill, the Salvation Army, Habitat for Humanity, and the Julian Center.

7.  According to the McQueens, they will use their Fill the Truck initiative to ask donations from local businesses. They will then take their truck to these local businesses to fill with items and then distribute the items collected to homeless people, people with low income, or people in the Hamilton County community who need them.

8.  The McQueens hope to collect nonperishable food items, clothing, and some furniture. The Fill the Truck campaign is expected to launch around the 2017 holiday season.

9.  Junk King stands out from the competition because of its commitment to being the greenest junk removal company. According to Junk King, the company was a pioneer in recycling-based junk removal when it started in 2005.

10.  Junk King takes the time to sort through the items collected at each job and look for metals, e-waste, paper, household goods, textiles, furniture, and appliances at its recycling warehouses. In addition to sorting the items, Junk King donates, recycles, and repurposes up to 70 percent of what the franchises collect.

12.  Junk King was founded in 2005 by childhood friends Mike Andreacchi and Brian Reardon in San Carlos, California. Andreacchi got the idea of opening his own junk removal business after working at his previous job with 1-800-GOT-JUNK?

13.  After finding success in the California Peninsula and the San Francisco Bay Area, Andreacchi and Reardon started franchising Junk King in 2010. Junk King now also franchises in Canada under the name Junk Works. As of April 2017, Junk King and Junk Works have over 75 locations (combined) in the U.S. and Canada.

14.  Although Junk King has been franchising since 2010, the company has yet to appear on Entrepreneur’s annual Franchise 500 list.

Next post: Lessons in Operating a Franchise Business with Family (Q&A with Bryce Kelley Sr., McAlister's Deli Franchisee in Orlando)