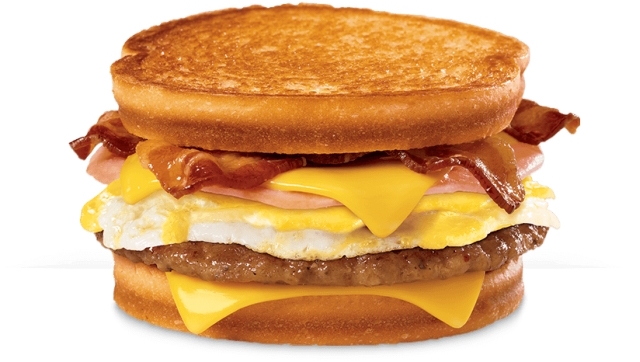 Jack in the Box, which served the first breakfast sandwich in 1969, has continued to feed breakfast to early risers (and even late ones) over the years.

While the McDonald’s breakfast menu only recently became available all day, Jack in the Box has been offering all-day breakfast for more than two decades, helped by a smaller breakfast menu than McDonald’s, ingredients that overlap across the menus, and grills and fryers aligned for cooking all menu items.

The chain buoyed breakfast even more in 2016 when it launched its Brunchfast menu, featuring half a dozen items that nicely bridge the gap between breakfast and lunch.

Most Jack in the Box locations are open 24 hours, so there’s even a late-night menu; for some people, breakfast is best at 3 a.m.

We’ve listed everything on the Jack in the Box breakfast menu, from the lowest in calories to the highest. Brunchfast items are included, too!

If you want an adorable light breakfast, or a side that will make you happy to meet the day, you can get eight pancakes for just 143 calories! OK, they’re Mini Pancakes, but if they weren’t, eight pancakes would give you a stomach ache. At home, I always make some tiny pancakes when I’m making regular ones. This little Jack stack has 4g protein and 28g carbs.

Another low-cal choice that could be a side, a snack or a mini-meal, the Jack in the Box Hash Browns have only 187 calories with 2g protein and 17g carbs. These hash browns come in a nice crispy patty. Don’t forget to count the butter (and you know you want it with butter). If you’re looking to boost your potassium intake, you’ll pull in 231g, which is pretty good for the calorie count. Potatoes are an excellent source of potassium.

Jack in the Box keeps breakfast pretty simple, including the names of the menu items, so the Breakfast Jack is about the snazziest of the titles. I like it. It’s still simple, but it has a ring to it. The Breakfast Jack places a freshly fried egg, a slice of ham and American cheese on a bun. Just like that. Don’t mess with simple goodness. For 350 calories, you’ll get 16g protein and 30g carbs. Or substitute bacon for 380 calories, 17g protein and 30g carbs.

With the Bacon, Egg & Cheese Biscuit, we move from a plain bun to a flaky buttermilk biscuit, which holds the same fresh fried egg, crisp bacon strips and slice of American cheese we found on the Breakfast Jack. Calories rise slightly to 410, with 16g protein and 26g carbs.

Some may love their buttermilk biscuits, but I’m partial to the soft cushion of a lovely croissant. On the Jack in the Box Supreme Croissant, you’ll enjoy grilled bacon, ham, a fried egg and American cheese. At 448 calories, you’ll have 19g protein and 32g carbs.

OK, you can mess with simple goodness as long as it involves sausage. Putting sausage instead of ham on the Breakfast Jack makes it a Sausage Breakfast Jack. The calorie count rises to 487, with protein at 19g and carbs at 29g.

The Ultimate Breakfast Sandwich, like some other menu items, is tempting, but since I live in Minnesota, I’m nowhere near a Jack in the Box. BUT … I’m going to St. Joseph, Missouri, in August to see the solar eclipse, so we can run over to Kansas City and try out the chain while also rekindling our relationship with Arthur Bryant’s BBQ and Stroud’s Chicken.

But back to this magnificent sandwich: Two fried fresh eggs, two slices of ham, two strips of bacon, two slices of American cheese, all on a buttered bakery bun. Boom. Those 520 calories come with 31g protein and 30g carbs.

See, part of how Jack in the Box simplifies its breakfast menu is by replication. These last five sandwiches are all the same except for meat and bread. The chain has 15 items on the breakfast menu, but most are tied to at least one other item. The Sausage, Egg & Cheese Biscuit has 534 calories, 18g protein and 27g carbs.

Perhaps you’re into traditional breakfasts, with food separated on a plate rather than nestled into a handheld baked good. If so, the Jumbo Breakfast Platter may be just right for you. All you need to do is decide whether you want three strips of bacon or some nicely grilled sausage. You’ll be served a jumbo platter filled with scrambled eggs, hash browns, eight mini pancakes and your choice of meat.

The bacon version has 540 calories and 23g protein, while the sausage platter has 621 calories and 21g protein. Both have 47g carbs. Both feel like home.

Remember the Supreme Croissant I drooled over – I mean, mentioned – earlier? The Sausage Croissant has more calories (555) than the two-meat version, but on the upside, it has sausage. That savory sausage patty rests on a buttery croissant along with a fried egg and American cheese. Both sandwiches have 19g protein and 32g carbs.

The Grilled Breakfast Sandwich looks mighty tasty, since I love grilled cheese sandwiches and anything that springboards off that. This is a total two-for: Two fried fresh eggs, two slices of ham, two strips of bacon and two slices of melty American cheese on two slices of grilled artisan bread. For 616 calories, you’ll get a hefty 36g protein along with 4g fiber, 376g potassium and 53g carbs. Sodium is at 1,813, but I don’t care – I’m in love.

If sausage is delicious, why not double it? The 650-calorie Extreme Sausage Sandwich places a fried egg between two sausage patties, which themselves are flanked by two slices of American cheese, all on a bakery bun. You’ll get 25g protein and 29g carbs. And double sausage. I want this more every time I see it.

Also a nice three-meat combo, the Meat Lovers Breakfast Burrito has the highest protein count of all the items on the Jack in the Box breakfast menu at 39g. This 790-calorie burrito, which has 50g carbs, tucks bacon, ham and sausage in a warm flour tortilla along with scrambled eggs and two kinds of cheese (cheddar and pepper jack). You’ll also get some fire-roasted salsa on the side.

The highest-calorie breakfast item by far with 1,044 calories, the Grande Sausage Breakfast Burrito “Jacks” things up a bit. That flour tortilla is stuffed full of sausage, crumbled bacon, scrambled eggs, hash browns and shredded pepper jack cheese, as well as cheddar cheese sauce and creamy sriracha sauce, with a side of fire-roasted salsa. It sounds divine, but I’m not a big eater at breakfast, so it also sounds like leftovers for lunch.

Not Into Breakfast? How About Brunchfast?

Jack in the Box went outside the box when it launched its Brunchfast menu in September 2016. Brunch is not really in the fast-food domain, but the chain has managed to nicely meld that connection between breakfast and lunch. And since it has all-day breakfast, it doesn’t really matter what time of day it is.

As it does throughout its menus, Jack in the Box keeps Brunchfast simple, with just six items. Read on to learn more.

Oh, man. Jack in the Box has introduced something great for fast food in its Homestyle Potatoes. Chunks of crispy diced and seasoned potatoes are delightfully blended with bell peppers for tasty fork food. These 259-calorie taters have 4g protein and 34g carbs. This is the kind of thing I love making at home, but I don’t often take the time.

Muffins make people happy all day long. There’s no time limit. Here you get a trio of little Orange Cranberry Muffins, packed with sweet and tart orange flavor and chunks of tangy cranberries to tame your sweet tooth. At 297 calories, 4g protein and 35g carbs, these babies would be great with a cup of coffee.

Finally, some French toast, my go-to breakfast order. The Grilled French Toast Plate offers three slices of French toast with syrup, accompanied by hickory-smoked bacon or sausage. This platter has 474 calories and 21g protein with bacon and 555 calories and 19g protein with sausage. Carbs are at 66g with either, partly due to the syrup. I don’t like syrup, but I make up for it with butter.

Also, it looks like the French toast is sprinkled with cinnamon sugar; I’ll be trying that next time I make French toast.

As intrigued as I am by the Homestyle Potatoes, I’m even more curious about the Southwest Scrambler Plate, which blends those potatoes with scrambled eggs, fire-roasted peppers, chiles and melty pepper jack cheese, with your choice of meat. With bacon, you’ll get 495 calories, 23g protein and 38g carbs. Choosing sausage will net you 576 calories, 21g protein and 38g carbs.

This is not your ordinary burger. Jack in the Box offers the 770-calorie Brunch Burger for those who don’t know whether they want a breakfast croissant sandwich or a cheeseburger. With this burger, a buttery croissant is piled with a beef patty, a fried egg, two slices of hickory-smoked bacon and cheddar cheese, along with mayonnaise. I think I’d skip the mayo, partly to save calories, but also because I’m not sure how I’d like it with egg. The Brunch Burger has 37g protein and 32g carbs.

Jack in the Box Breakfast Menu: Simple and Streamlined

While the Jack in the Box breakfast menu overlaps with the other menus, and even within the breakfast offerings, it does so without sacrificing on temptation. Through familiar combinations enhanced by occasional surprises, the chain is making simplicity intriguing. I’m not sure about eggs on a chicken fillet or a burger (I think the egg taste might get lost amid the chicken or beef flavor), but I think it’s cool that Jack in the Box is coming up with fresh ideas.

Next post: FDD Talk 2017: What You Need to Know About the Papa John's Franchise Opportunity (Financial Performance Analysis, Costs and Fees)