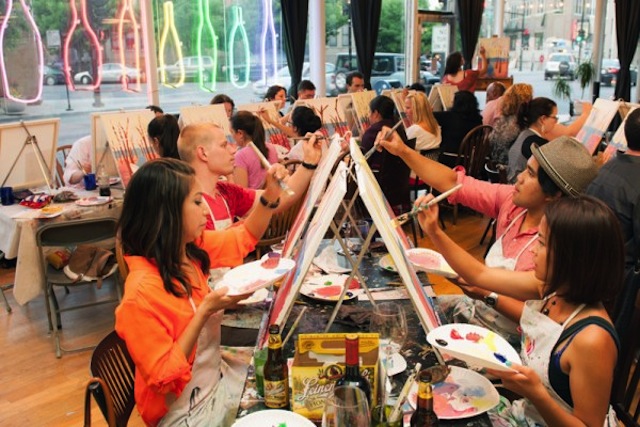 10 Things You Need to Know About the Bottle & Bottega Franchise

2.  At the end of September 2016, Bottle & Bottega announced plans to open a location in the Park Ridge/Niles area, a northwest suburb of Chicago, in early 2017 after signing an agreement with franchisee Neenu Gupta. According to Gupta, whom CEO Nancy Bigley says is the ideal person the company had been searching for to fill that territory, there is currently nothing like Bottle & Bottega in her market.

3.  In early 2017, Gupta hosted public and private wine and paint events in homes, restaurants, offices, community venues, and other locations throughout the northwest Chicago suburbs. Now that the studio is open, Gupta complements on-site art parties with in-studio events.

4.  From November 7 to December 3 during the 2016 holiday season, each Bottle & Bottega location held a “Week of Giving” by partnering with a local charity of the studio’s choice. Members of each community were encouraged to help paint a mural that was eventually donated to the partner charity; part of the proceeds from the event were also given to the partner charity.


5.  October is Adopt a Shelter Dog Month, and in 2016, participating Bottle & Bottega studios held Paint Your Pet events. During the events, guests were able to bring in a picture of their pet as a reference for their professional-instructor-guided painting. The Paint Your Pet classes were held throughout the month of October and proceeds from each event were donated to pet-related charities in participating Bottle & Bottega communities.

6.  At the beginning of October 2016, Bottle & Bottega released three new products that were available during the fourth quarter of 2016. The new products included metallic paints, art masking (painting over tape on black canvas to create abstract art pieces), and pumpkin painting.

7.  Bottle & Bottega says that it is always looking for new ways for its guests to explore their creative side and that the new items were an example of how the company continues to evolve and expand the meaning of art within its communities.

8.  Bottle & Bottega was founded in 2009 by Stephanie-King Myers and Nancy Bigley in Chicago, Illinois, after the two women left careers in corporate America. According to the company, Bottle & Bottega is Chicago’s first wine and art entertainment studio.

9.  After opening a few more locations in the Chicago area, Myers and Bigley began franchising in 2011. Bottle & Bottega’s growth had been slow but picked up in 2016. There are currently over 20 locations across the U.S.

Next post: 32 Substantial Fees Every Checkers/Rally's Franchisee Needs to Know About