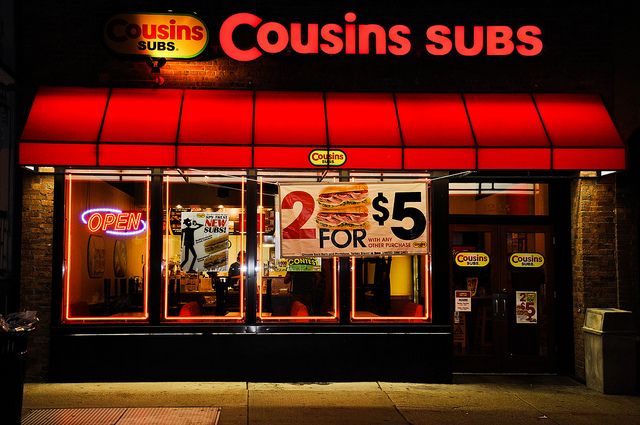 16 Things You Need to Know About the Cousins Subs Franchise

1.  In 2016, Cousins Subs announced that it would be undergoing a rebranding initiative, committing to streamlining its locations’ look and feel, which has set the company up for its next phase of growth.

2.  As a result of last year’s growth plan, Cousins announced in early April 2017, that it was ready to expand in other areas of the Midwest, specifically in the Chicagoland area. Cousins has signed new agreements with three franchise groups: The OM Group; multi-unit owners Chad Ellett and Randy Fusch from Reedsburg, Wisconsin, along with Mike Gilbertson of South Beloit, Illinois; and father-son business owners John Stewart Sr. and John Stewart Jr.

3.  Ellet, Fusch, and Gilbertson have signed a development agreement to open two new stores over the next two years between Madison and Rockford, Illinois. The Stewarts, who have purchased the two Cousins franchise locations in Sheboygan, Wisconsin, have shown interest in continued growth with Cousins in both Wisconsin and the Chicagoland area.


5.  Cousins Subs is encouraging customers to show their love for the sandwiches on social media by using #GOHOGWILD. Both sandwiches will be available until July 31.

6.  In late April, Cousins Subs launched a new responsive consumer website to improve the guest experience online. The new website offers a more user-friendly experience through more dynamic features that reduce the number of navigation clicks and increase functionality in the areas of product information, online ordering, and restaurant information.

7.  Customers can visit the Cousins website from a PC, tablet, or mobile device to see the site’s new features, which include:

9.  In addition to collecting food, for every Bucks blocked shot, Cousins’ Make It Better Foundation donated $45 to Hunger Task Force in honor of the franchise company’s upcoming 45th anniversary—a total that amounted to $19,665 by the campaign’s end.

10. Since the start of the Block Out Hunger campaign in 2015, Cousins Subs and the Milwaukee Bucks have raised a total of $29,665 and 10,137 pounds of food to support Hunger Task Force and pantries statewide.

11.  Cousins and the Bucks have chosen to work with Hunger Task Force because it is Milwaukee’s only Free & Local food bank, is Wisconsin’s leading anti-hunger organization, and has a strong network of partnering pantries.

12.  Cousins Subs was founded in 1972 by cousins Bill Specht and James Sheppard in Milwaukee, Wisconsin after the two were unable to find a suitable sub sandwich option in Milwaukee like they had when they lived in New Jersey. Soon after opening the first shop, Specht and Sheppard partnered with a local baker to make their own unique bread.

13.  Cousins Subs continued to expand throughout the Milwaukee area and began franchising in 1985. Although Cousins Subs has been in business for over 40 years, the company has mostly remained in Wisconsin with only a few locations outside of the state, particularly in Arizona.

15.  Today, there are over 80 franchised Cousins Subs locations in Wisconsin and Arizona and over 20 corporate-owned Milwaukee-area stores.

Next post: What You Need to Know About This Year's International Franchise Expo (Q&A with Tom Portesy, President of MFV Expositions)