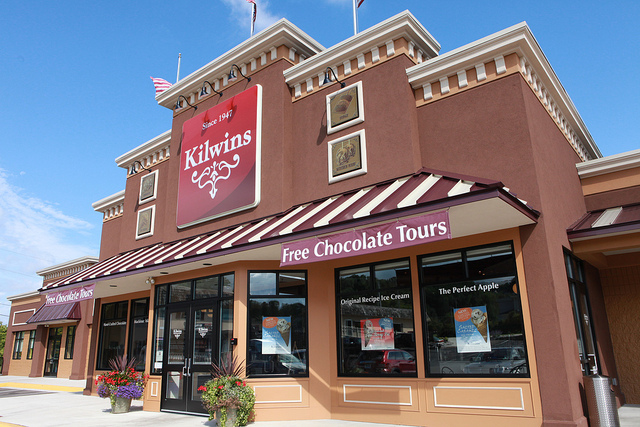 8 Things You Need to Know About the Kilwins Chocolates Franchise

1.  Although Kilwins Chocolates has been in business for 70 years, the company’s growth has remained moderate. In an effort to speed up growth, starting around 2010, Kilwins began a new marketing and branding initiative with plans to open about 10 new locations annually. According to CEO Don McCarty, Kilwins wanted to ensure that growth was done thoughtfully.

2.  As Kilwins grows, the company tries to stick to its “brand lens,” which company executives have ranked and named the “8 Ps: product, pricing, promotion, packaging, people, place, presentation and publicity.” The company reviews and redesigns the 8 Ps as needed in order to help Kilwins grow.

3.  To help Kilwins Chocolates stand out from the competition, the company continues to release new and unique items. A few years ago, Kilwins introduced its Single Origin Chocolates, which come from specific regions of the world such as the Dominican Republic, Peru, and Mexico. The beans are sourced from these countries and then produced in small batches in order to retain the region’s unique flavors. Some of the line’s products include Mexican Fudge Topping, Dominican Shredded Drinking Chocolate, and a 3 pack of Peruvian milk, dark, and white chocolate bars.

4.  In addition to selling chocolates that are manufactured at the “Chocolate Kitchen” facility in Petoskey, Michigan, each store sells Kilwins’ original recipe ice cream along with specialty made-in-store products such as fudge, caramel apples, brittles, and caramel corns. All specialty items are made fresh daily at each location and customers can watch as the treats are being made. One of Kilwins’ signature specialty items is the Nutcracker Sweets, a blend of popcorn, almonds, pecans, and caramel.

5.  Kilwins has maintained the high quality of its products by using the same recipes handed down from original owners Don and Katy Kilwin. According to the company, all products made in the cold room, such as the Almond Toffee Crunch, have been made the same way since the beginning. Kilwins also still uses the original 1985 recipe for its ice cream. Except for some small improvements, the company has been using the same chocolate making equipment since 1965.

6.  In 1947, Don and Katy Kilwin opened Kilwin’s Bakery in Petoskey, Michigan. Soon after opening, the Kilwins began making candy. In 1971, the Kilwins sold the bakery to focus solely on chocolates and confections. The Kilwins sold the business to Wayne and Lorene Rose in 1978. A few years later, in 1982, the Roses officially began franchising Kilwins Chocolates.

Next post: What You Need to Know About Fastest Labs, a Drug Testing Franchise (Q&A with Founder Dave Claflin)