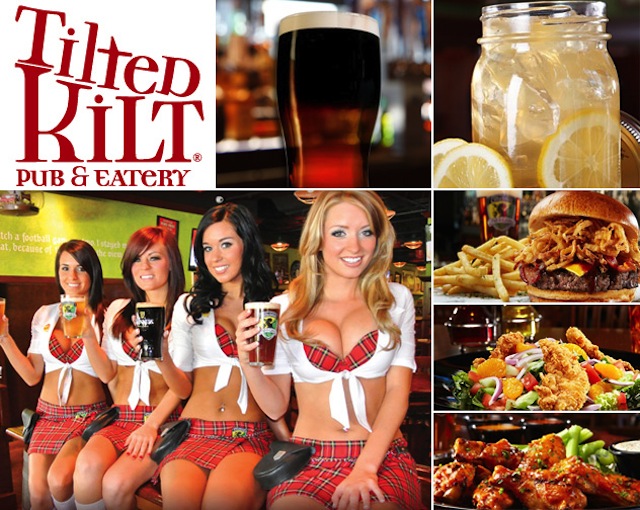 12 Things You Need to Know About the Tilted Kilt Franchise

2.  As CEO, Goitia is responsible for the day-to-day operations of the company, while Reves oversees the marketing, operations, and training departments, as well as strategic menu development for the brand.

3.  In late July 2016, Tilted Kilt unveiled a modernized restaurant prototype. The new pub features the layout for all future Tilted Kilt restaurants and was designed to increase the fun and entertaining elements that guests have come to expect from Tilted Kilt.

4.  The restaurant prototype was built in front of Tilted Kilt’s company headquarters and is able to entertain 225 guests inside and another 90 on a semi-covered outdoor patio featuring new pit-style soft seating surrounding fire and water structures. There is also a new gaming area for customers to enjoy, a venue for live entertainment, and a dozen 70-to-80-inch flat screen TVs for watching various sports programs.


5.  The new gaming centers will have pool tables, shuffle boards, darts, and bags. In addition to more TVs, the new pubs will have a TKTV “Crew Cam” which allows customers to watch while their food is being prepared in the kitchen.

6.  The biggest change to the restaurant’s atmosphere is the brighter appearance. There is lighter colored trim and window shades to allow for more light.

Partnered with Coaches vs. Cancer

7.  In late February, Tilted Kilt announced that it had partnered with the Coaches vs. Cancer program in an effort to encourage Tilted Kilt customers and fans to help the fight to end cancer. From February 20 to April 3, customers were invited to “Take a Shot Against Cancer” by adding onto their checks a $1, $3, or $5 donation.

8.  Guests who donated received a basketball paper cut-out to autograph and display on their local Tilted Kilt’s walls. All proceeds benefited the Coaches vs. Cancer program.

9.  The first Tilted Kilt Pub & Eatery was opened in the Las Vegas Rio Hotel and Casino in 2003 by restaurateur Mark DiMartino and business partners and co-founders Shannon Reilly and John Reynaud. The restaurant’s concept is a “contemporary, Celtic-themed sports bar, staffed with beautiful servers.”

10.  Although Tilted Kilt originally did not have franchising in mind, the restaurant caught the eye of Ron Lynch, an experienced and savvy restaurant and franchise developer. Franchising officially began in 2006 and the company relocated its headquarters from Las Vegas to Tempe, Arizona, where it is still based today.

11.  Tilted Kilt’s growth has remained moderate. There are currently around 95 locations in the U.S. and Canada.