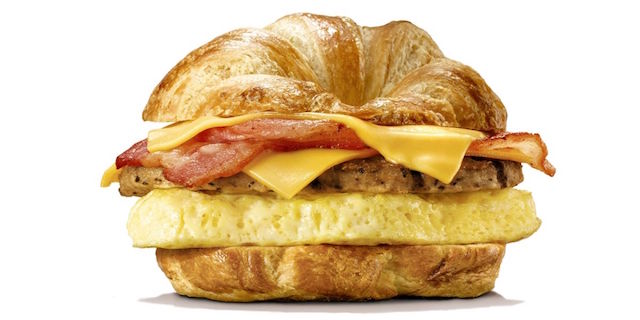 Burger King’s flame broilers are great for burgers, but initially did not adapt well to preparing breakfast items. Even though the chain started serving breakfast items in 1978, it took a while to take hold. The Burger King breakfast menu lagged until the launch of the Croissan’wich in 1983 and the addition of French Toast Sticks in 1985.

These innovations finally set Burger King apart from McDonald’s, whose breakfast menu was already well established. As BK’s offerings expanded over the years, both the Croissan’wich and the French Toast Sticks remained, with the Croissan’wich multiplying into several popular iterations, some bearing the chain’s moniker “King.”

In this guide, you’ll find everything on the breakfast menu, ranked from least calories to most, with protein and carbs listed as well.

Oatmeal is one of the ultimate breakfast items. It’s warm, hearty and familiar, especially with brown sugar and milk on top. Not only that, but oats are good for you, and Original Maple Flavored Quaker Oatmeal has only 170 calories, along with 4g protein and 32g carbs.

It’s made with maple and brown sugar-flavored whole-grain rolled oats and served with creamer. I’ve never seen creamer used over a cereal, but I suppose it’s a liquid creamer similar to half & half.


I tend to buy an individual carton of milk when I get oatmeal; lots of places serve oatmeal naked, which for me is an abomination. I like my oatmeal swimming, and I’d probably add a little brown sugar to the milk.

French toast has been my go-to breakfast for many years, and I’ve never tired of it. Since I don’t like syrup, I can even eat French toast with my hand, so I’m already down with the idea of it as finger food.

Burger King suggests these golden-brown and ever-so-slightly-crisp sticks be dipped in a side of breakfast syrup, but the menu neglects to tell you the nutritional info. But I will tell you: the syrup will run you 130 calories and 30 grams of carbs.


If you like syrup, the nice part is that when you’re dipping, you can control how much goes into your mouth.

I keep saying the same thing when it comes to versions of hash browns: they don’t give you much nutrition, but they don’t cost much in terms of calories and carbs as long as you get a small order.

Burger King Hash Browns come in three sizes, and the largest has enough calories to be a meal. The small size has 230 calories with 2g protein and 24g carbs. A medium order doubles everything: 500 calories, 4g protein and 48g carbs. The large isn’t as much of a leap: 670 calories, 5g protein and 65g carbs.

I’d stick with the small as a side, with a pat of butter. Hash browns without butter is about as pleasant as eating a piece of plain bread.

The Croissan’wich was the first major breakfast sandwich on the menu for Burger King, and it’s done well for the chain. Not many mainstream fast-food restaurants offer croissant sandwiches, which are more common in coffee shops and delis. But a light, flaky croissant makes a pleasant bun.

The lowest-calorie offering here is the Egg & Cheese Croissan’wich at 300 calories. Fluffy eggs and melted American cheese nestle nicely in the croissant and provide 11g protein. Carbs are at 30g.

Fans of ham and eggs (or a hot ham sandwich with melted cheese) should like the Ham, Egg & Cheese Croissan’wich, which piles thin-sliced sweet black forest ham in between eggs and melty American cheese on BK’s famed croissant.

The addition of ham adds only 40 calories for a total of 340. Protein rises to 16g, with carbs at 31g. This hearty sandwich will give you a good start to the day.

Bacon makes everything better. I’d say maybe not ice cream, but I bet someone has already whipped up a maple-brown sugar-bacon ice cream or frozen yogurt that people love.

The Bacon, Egg & Cheese Croissan’wich layers thick-cut naturally smoked bacon on a buttery croissant along with melted American cheese and fluffy eggs. Calories are at 340 with 12g protein and 30g carbs.

It’s sometimes compared to Taco Bell’s Crunchwraps, but those are much busier and much higher in calories. In terms of ingredients and calories, the Hash Brown Burrito is more comparable to the Taco Bell Grilled Breakfast Burrito Fiesta Potato or the Grilled Breakfast Burrito With Sausage, both of which have 340 calories. However, one has sausage and the other has hash browns.

BK’s burrito, at 370 calories, has both, and the creamy spicy sauce pulls everything together nicely. You’ll get 15g protein and 27g carbs.

Breakfast at Burger King isn’t all about the croissants. Biscuits and biscuit breakfast sandwiches are pretty ubiquitous on fast-food menus. I’m not a big fan of the traditional baking-powder biscuit: I find them a little heavy and kind of dry.

But Burger King’s biscuit is a buttermilk biscuit, and buttermilk is touted as the secret to a nice, flaky biscuit. If you look at the Ham, Egg & Cheese Biscuit, you can see that flakiness.

For 370 calories, you get a warm biscuit that envelopes thin-cut black forest ham, fluffy eggs and melty American cheese. Protein is at 16g and carbs at 30g.

Protein is a little lower at 13g and carbs are virtually the same at 29g.

How is sausage on a biscuit comparable in calories to ham and bacon? The secret is the absence of eggs and cheese. This sandwich is for people who really want sausage but don’t want to go overboard in calories (if you want the works, we’ll get there shortly). So basically it’s a sausage patty on a buttermilk biscuit, a simple sandwich that lets the sausage be the star.

This 390-calorie menu item will give you 12g protein and 28g carbs.

Sausage factors heavily in Burger King’s higher-calorie breakfast items. We return to the Croissan’wiches with the Sausage, Egg & Cheese Croissan’wich, in which sausage, fluffy eggs and melted cheese are stacked on a soft, buttery croissant for an easy-to-manage one-handed savory sandwich. This is a pretty satisfying breakfast, if you ask me.

Remember that Sausage Biscuit a bit ago? With a 120-calorie boost for egg and cheese, we have the Sausage, Egg & Cheese Biscuit. A flaky buttermilk biscuit is split and filled with a tangy sausage patty, fluffy eggs and melted American cheese.

I guess other things being equal, this shows that the buttermilk biscuit has more calories than the croissant, since this is 40 calories more than the Sausage, Egg & Cheese Croissan’wich.

We move into the realm of royalty with the King Croissan’wich With Ham & Sausage. This hearty 530-calorie sandwich is stacked high with fluffy eggs, generous servings of sausage and black forest ham, and two slices of melty American cheese. It’s quite a handful.

I’m not sure why the Fully Loaded Croissan’wich doesn’t get the royal treatment, because it’s the king of meats for sure. This sandwich is super stacked with eggs, sausage, black forest ham, thick-sliced bacon and double cheese. There’s a lot of space between the halves of that buttery croissant; it could be a challenge to get it in your mouth.

I was puzzled that the King Croissan’wich With Sausage & Bacon is, at 580 calories, 10 calories higher than the Fully Loaded Croissan’wich, which has sausage and bacon, plus ham.

But that mystery is solved, as the portions are not quite equal. Although the Fully Loaded Croissan’wich has one more meat, the King Croissan’wich With Bacon & Sausage has twice as much bacon, so the two sandwiches end up with about the same number of calories!

The King Croissan’wich With Bacon & Sausage piles the two meats with fluffy eggs and two slices of cheese on a flaky croissant, providing 24g protein and 31g carbs.

If you’re more up for fork food, try the Pancakes & Sausage Platter. You’ll get three fluffy pancakes with a savory sausage patty, along with a butter blend and breakfast syrup.

Right off the bat, I eliminate 90 calories, since I don’t like syrup, but with the syrup, this breakfast has 610 calories, 12g protein and 72g carbs (22g carbs come from the syrup).

But I could never give up the butter! (Actually, I do like fruit syrups like blueberry and raspberry, just not maple.)

This just might be the king who gains my allegiance. Two sausage patties, with a slice of cheese on each, atop fluffy eggs, are stacked neatly within the warm split croissant. Yes, please.

I’d even consider adding 30 calories of bacon, since I’d already be in for 700 calories. I could ease my guilt by leaving off the eggs!

But back to the actual sandwich:  The King Croissan’wich With Double Sausage has a sweet 27g protein, and carbs are at 31g.

Remember the 340-calorie Hash Brown Burrito? Well, the Egg-Normous Burrito is like having two of these and eating half of another one.

It’s well over twice the calorie count as it packs a lot more into that soft flour tortilla: crumbled sausage, thick-cut bacon, fluffy eggs and hash browns, jacked up with BK’s creamy spicy sauce and a creamy queso sauce made with pepper blend cheese. You’re going to need to be hungry for this one.

You’ll get a whopping 33g protein and 73g carbs.

If you thought the Egg-Normous Burrito was a lot of food, here’s the BK Ultimate Breakfast Platter, which tops out the breakfast lineup at 1,190 calories and 123g carbs. Protein is at 27g.

This platter serves up scrambled eggs, sausage, hash browns, a warm biscuit and three pancakes with breakfast syrup. I’ve always wondered why we need both a biscuit or toast and pancakes; you’d think one or the other would serve the carbs we need for the morning. (If you remove pancakes and syrup, calories drop down to 830 and carbs to 51. Just saying.)

Dine on Something Different for Breakfast at Burger King

If I’m going for breakfast at Burger King, I’m probably not going for the big breakfast platter or the pancake platter; while I think it’s an important option for those who want a traditional breakfast, these are things I’d probably make at home and serve everyone.

Next post: 20 Substantial Fees Every Dunkin' Franchisee Needs to Know About