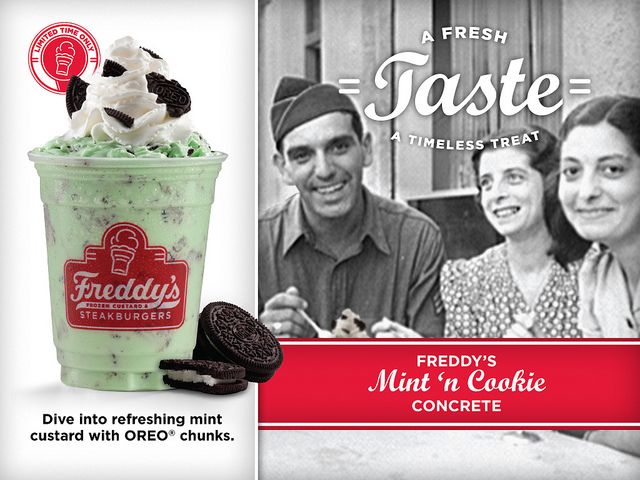 Poised for Strongest Year Yet After Record Growth in 2016

2.  Freddy’s projects that 2017 will be an even bigger year for the company with plans to open 70 new locations by the end of the year in existing and new markets, including three new states:  Wyoming, Maryland, and Mississippi.

4.  To kick off the start of summer, Freddy’s introduced the Spicy Chicken Sandwich and Peanut Butter Crunch Concrete in early May. Both items are limited-time offers and will run until mid-June or while supplies last at participating locations. According to Chief Operating Officer Scott Redler, Freddy’s fans are always anticipating what limited-time offers will be released next.

5.  From February 17 through February 26, Freddy’s offered a couple of its frozen custard treats for 92-cents as a way to celebrate its co-founder and namesake, Freddy Simon. During the celebration week, customers were able to purchase a 92-cent single scoop of chocolate or vanilla frozen custard served in either a traditional cake cone or a dish.

6.  Also during the event, fans were encouraged to send Freddy a birthday message and photo through Facebook, Twitter, and Instagram using the hashtag #HappyBDayFreddy and tagging @FreddysUSA for a chance to be featured on the restaurant’s official social media accounts. A life size cutout of Freddy was available at participating locations for guests to take pictures with.

7.  Freddy’s Frozen Custard & Steakburgers was founded in 2002 by two brothers, Bill and Randy Simon, and restaurateur Scott Redler in Wichita, Kansas. The brothers named the restaurant after their father Freddy Simon, who is sometimes also credited as a co-founder.

8.  Freddy’s opened its first franchised location in Hutchinson, Kansas in 2004 and growth remained moderate for nearly a decade. The company’s growth has picked up in recent years with its 100th location opening in 2013. Today, there are over 240 locations across 30 states with plans to have over 300 locations in the U.S. by the end of 2017.