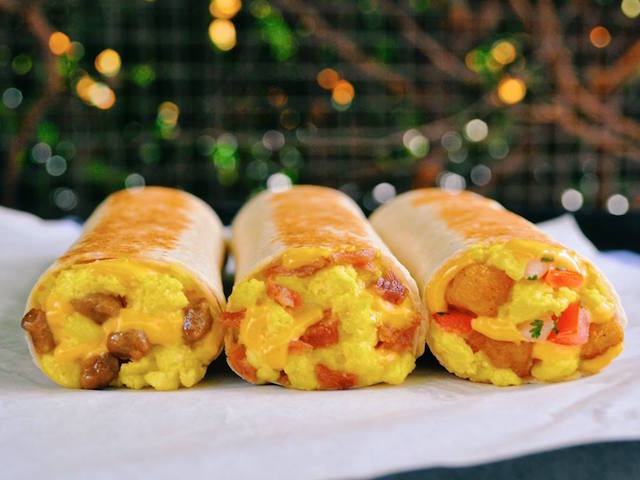 When you’re looking for a quick breakfast at a fast-food restaurant, you may be looking more for a Chick-fil-A chicken breakfast sandwich than spicy food on the Taco Bell breakfast menu, but perhaps that spice is just the thing you need to get you going in the morning.

Taco Bell debuted its breakfast menu in 2014. In 2016, the chain revamped the menu, switching out some items and introducing some new ones for cheaper breakfast offerings. It also introduced the Morning Value Menu of $1 items. Taco Bell breakfast hours run from 6 a.m. to 11 a.m.


One really nice thing about Taco Bell breakfast is the number of additions you can make for a small extra cost. Some of these ingredients include meats, cheeses, spicy sauces, Pico de Gallo, guacamole and sour cream.

To save you the task of counting calories, we’ve arranged the menu by calorie count, from low to high, and listed protein and carbs, too.

For many, this is where breakfast starts. Before we have that first bite of food, we need to ingest some coffee to start the day out right. If you’re like me, though, your coffee isn’t 10 calories. I’ve become spoiled on flavored liquid creamer; my favorites are French vanilla and hazelnut. Be aware that the flavored creamer at Taco Bell is 25 calories per portion.


OK, I know there are plenty of people who drink black hot coffee, but I’m going to go out on a limb and say there aren’t nearly as many who have iced coffee without additives. Because for most people, this drink more closely resembles a cappuccino than a cup of coffee and would probably have more of the 25-calorie flavored creamer than with regular coffee. But if you like your iced coffee black, it’ll be 10 calories.

According to the menu, it’s there to battle the bully called morning, to “give you the energy to fight through the fatigue and punch morning right in its little 8 A.M. smack-talking mouth.” That kick comes from 96mg of caffeine. The PepsiCo website notes that this drink combines Dew and orange juice, but don’t get too excited. It’s 1 percent juice.

Speaking of orange juice, here’s the real thing. This single-serve Tropicana not-from-concentrate juice has 140 calories, and 32g carbs. It’s a good boost of Vitamin C that tastes good, too.

If you want your breakfast in sugar and carbs, Cinnabon Delights are for you. The 2-pack is only 160 calories, so it could be paired with a low-calorie protein food for a more balanced meal, but if you’re a coffee-and-a-donut person, these save a bunch of calories compared to the donut. And it’s much more reasonable in carbs with 17g.

At only 1g protein, Taco Bell’s hashbrowns aren’t going to be the star of your morning meal, but they’re a tasty sidekick. And at only 13g carbs, they’re not a negative. I love hashbrowns, but I have to have butter, so if you’re like me, you’ll want to factor in the calories in that pat of butter.

If you can enjoy a meatless breakfast, you can start the day with an entree that’s only 170 calories. The Breakfast Soft Taco with egg and cheese, the lowest-calorie entree on the breakfast menu, pairs eggs and cheddar cheese in a flour tortilla for a small and portable one-handed meal. It’s got 7g protein and 15g carbs. You can also have any of the breakfast tacos grilled for a little wake-up crispness.

Another low-calorie entree on the breakfast menu is the Mini Skillet Bowl, a busy dish with 180 calories. You’ll get 5g protein and 16g carbs for this tangy basic bowl, which combines eggs, potato bites, Pico de Gallo and nacho cheese sauce.

The only breakfast items in the 200-to-300-calorie range are the meaty versions of the Breakfast Soft Taco. Inside a soft flour tortilla, the 230-calorie Breakfast Soft Taco with sausage combines sausage crumbles, eggs and cheddar cheese. It’s got 9g of protein and 15g carbs – not bad in either category.

The benefit to the Breakfast Soft Taco with Bacon is that bacon will likely stay put easier than sausage if you’re eating on the run. Bacon, eggs and cheddar cheese join inside a flour tortilla for a nice breakfast item that’s low-calorie (240) enough that you could go for two. This tasty taco has 11g protein and 15g carbs.

And we’re back to the Cinnabon Delights, this time in a 310-calorie pack of four. It’s still lower in calories than that donut I mentioned earlier, but if I look at the other menu items in this calorie range, it feels like you’re not getting as much actual food with these tasty sugary nuggets. But then again, I guess the key is that they’re tasty sugary nuggets. With this size, you’ll pull in 35g carbs while adding 3g protein.

Eggs and crumbled sausage combine with a three-cheese blend inside Taco Bell’s Gordita Flatbread for the Sausage Flatbread Quesadilla. At 330 calories, this is substantial enough to be most of your meal, but low enough in calories to add hashbrowns and juice if you like. Flatbread grilled up for a quesadilla makes a nice soft pocket for eggs and tangy sausage. This dish has 14g protein and 27g carbs.

We’re right back to sausage with the 340-calorie Grilled Breakfast Burrito. Eggs, sausage crumbles and nacho cheese sauce are enveloped in a soft flour tortilla for 11g protein and 36g carbs. This Taco Bell Breakfast Burrito is another good one-handed food with a spicy kick.

This sounds like a breakfast party food. The Grilled Breakfast Burrito Fiesta Potato, at 340 calories, has the same number as the Grilled Breakfast Burrito with sausage. This is confusing until you realize the sausage is gone. Its absence opens the door for other ingredients. In this burrito, joining the eggs and nacho cheese sauce in the flour tortilla are potato bites and Pico de Gallo sauce. Protein is at 10g, while carbs rise to 43g.

If you want meat in your breakfast burrito but are more into bacon than sausage, you can get the Grilled Breakfast Burrito with bacon for only 10 calories more. Eggs, bacon and nacho cheese sauce are tucked inside a soft tortilla and provide 13g protein and 37g carbs.

A cheese quesadilla is good anytime, so the 460-calorie Breakfast Quesadilla should be a hit for anyone who likes a meatless meal. A grilled soft flour tortilla holds a three-cheese blend and creamy Jalapeno sauce. Protein is at 19g, and carbs are at 37g. It’s a basic quesadilla, but the addition of the creamy Jalapeno sauce provides a welcome spice boost.

If you’re looking for protein, you’ll find a hearty 29g of it in the Breakfast Quesadilla with steak. At 500 calories, you’ll get juicy chunks of steak, a three-cheese blend and creamy Jalapeno sauce in a grilled soft flour tortilla. Carbs are at 38g. If you like steak for breakfast, this is a reasonably priced dish that’s not terribly high in calories.

The Breakfast Quesadilla with sausage combines crumbled sausage, a three-cheese blend and creamy Jalapeno sauce in a grilled soft flour tortilla. For 500 calories, you’ll gain 24g protein and 37g carbs. It provides less protein than either the steak or bacon versions, but if you prefer sausage (yes, please!) you’ll be happy to live with it.

My sister-in-law has been a vegetarian for about half of her 50 years, and she says the food she misses the most is bacon. There’s good reason. Bacon is amazing. At 510 calories, this quesadilla holds bacon, a three-cheese blend and creamy Jalapeno sauce in a grilled flour tortilla. You’ll get 26g protein and 37g carbs.

I’m liking the Breakfast Crunchwrap California for its color and kick with the Pico de Gallo. You’ll get a little bit of everything inside the flour tortilla: bacon, eggs and cheddar cheese with crunchy hashbrowns, topped with Pico de Gallo and premium guacamole. This big wrap provides 21g protein, 5g fiber and 52g carbs for 630 calories.

The Grande Scrambler Burrito with steak packs a lot into its flour tortilla: marinated grilled steak, eggs, potato bites, cheddar cheese, nacho cheese sauce, Pico de Gallo and reduced-fat sour cream. Calories are up to 630 with this hefty burrito, and carbs rise to 65g, but you’ll get a nice 24g protein and 5g fiber as well. It’s a nice option for steak lovers.

Steak lovers, here’s another breakfast choice for you. In the Breakfast Crunchwrap with steak, a flour tortilla holds your steak, eggs, hashbrowns, cheddar cheese, nacho cheese sauce, and creamy Jalapeno sauce. If you love the taste of hashbrowns but don’t want to add them as a side, this may be your breakfast sandwich. The 650-calorie Breakfast Crunchwrap has 24g protein, 4g fiber and 51g carbs.

The Breakfast Crunchwraps are pretty similar in numbers, so you may as well order whichever meat you like best. While the steak version has 24g protein, the bacon version is in the vicinity with 21g. This Breakfast Crunchwrap features a flour tortilla with eggs, bacon, hashbrowns, cheddar cheese, nacho cheese sauce, and creamy Jalapeno sauce. At 670 calories, you’ll get 4g fiber and 51g carbs.

We close out the Taco Bell breakfast menu with the 12-pack of Cinnabon Delights, which come in at a whopping 930 calories, but don’t worry, they’re not all for you. They’re listed at four nuggets per person for a total of four servings. This would be a cool treat to share with your family or a few co-workers, or to score points with your boss. If you’re thinking about eating the whole pack yourself, I feel I must tell you that all 12 would give you 104g carbs but only 9g protein.

This menu is notable for not having all that many high-calorie foods (the 12-pack of Cinnabon Delights doesn’t count, because NO ONE would EVER eat 12 Cinnabon Delights, right???). Most of the substantial choices are between 240 and 460 calories. At many fast-food restaurant chains, you’ll find burgers and chicken sandwiches with substantially more calories, so you could cut some calories by choosing some complex spicy combinations for breakfast at Taco Bell.

Previous post: Tips from Once Upon A Child Franchise Owners on How to Become an Integral Member of Your Local Community (Q&A)

Next post: FDD Talk 2017: What You Need to Know About the Pancheros Mexican Grill Franchise Opportunity (Financial Performance Analysis, Costs and Fees)