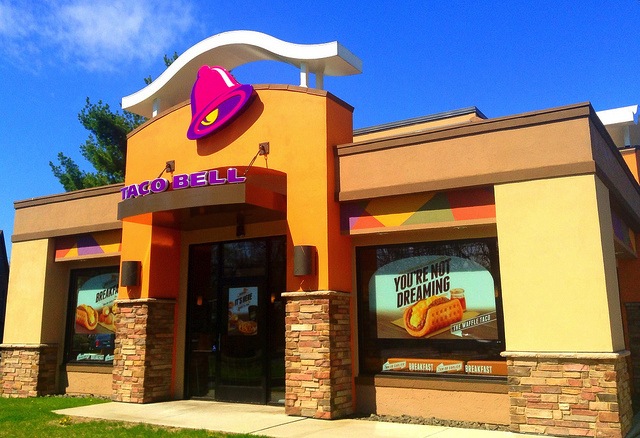 11 Things You Need to Know About the Taco Bell Franchise


1.  At the beginning of 2017, Taco Bell Corp. and Yum China Holdings, Inc. announced that the first Taco Bell location in China had opened in Shanghai. The inaugural restaurant is located near the city’s landmark Oriental Pearl Tower. This first Chinese location is an important part of Taco Bell’s growth strategy of reaching 1,000 restaurants internationally by 2022.

2.  According to Micky Pant, CEO of Yum China, the company did extensive research to ensure that Taco Bell’s menu would fit the tastes of Chinese consumers. The menu features traditional Taco Bell favorites that have been adapted to local tastes. Exclusive sauces and items are being offered, such as the Shrimp and Avocado Burrito and the Volcano Chicken Burrito with a spicy Sriracha sauce. Other unique menu items include spicy fried chicken, Mexican fries, and alcoholic beverages like Margaritas and Mojitos.

3.  In addition to the unique menu items, the Shanghai location features an open kitchen which allows customers to see their food being made. Taco Bell has also used social media to teach Chinese consumers about the concept and main ingredients in Mexican food, which is a type of cuisine not widely known in the country.

4.  Initial reactions to the restaurant have been positive. Prior to the official launch, the restaurant held a soft opening and over 1,000 fans participated in a selfie soft opening promotion on social media to express their excitement over the arrival of Taco Bell in China.


5.  In early April, Taco Bell got rid of its vegan-friendly premium Latin rice and replaced it with a seasoned rice that has butter as one of the ingredients. According to Missy Nelson, Taco Bell’s senior nutritionist strategist, the butter was added to “bring more flavor to the rice.” The company is currently developing a vegan Mexican-style rice which will launch sometime in the summer.

6.  Toward the end of March, Taco Bell celebrated the fifth anniversary of its famous Doritos Locos taco. To mark the milestone, the company launched the Feed a Dream promotion. For two weeks starting on March 23, Taco Bell donated ten cents for each a la carte Doritos Locos taco purchased, up to $500,000, to the Taco Bell Foundation’s Live Mas Scholarship. According to Brian Niccol, CEO of Taco Bell Corp. and Chairman of the Taco Bell Foundation, the company wanted to use the popularity of its most successful product to do something good.

7.  Taco Bell also used the Feed a Dream promotion to showcase the talents of Live Mas Scholarship recipients. The company asked recipients to create the television commercials and taco packaging for the campaign. Students participated in a creative workshop in Chicago where they worked side by side with veteran advertising and marketing creatives to develop the campaign’s ad concept and script. Recipients also created three unique designs that were featured on the Doritos Locos taco holster packaging and wrap.


8.  Taco Bell was founded in 1962 by Glen Bell in Downey, California. Prior to opening Taco Bell, Glen Bell had opened a few restaurants that sold hot dogs and hamburgers. Bell became interested in selling Mexican food after watching the long line of customers outside of Mitla Cafe, which was across the street from Bell’s Hamburgers and Hot Dogs. Bell became a regular of the Mexican restaurant and tried to reverse engineer its food.

Next post: 20 Substantial Fees Every Wild Birds Unlimited Franchisee Needs to Know About