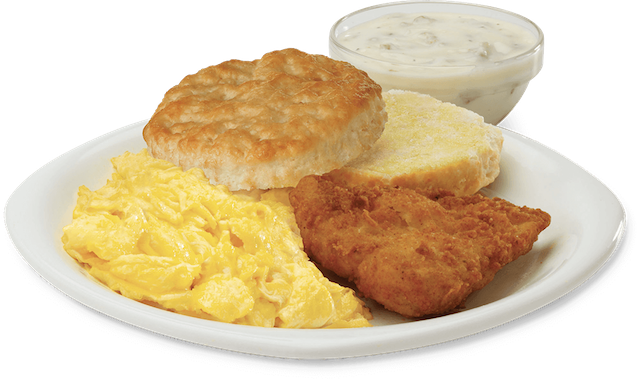 If you’re not used to chicken for breakfast, maybe you’ve never had your morning meal at Chick-fil-A. This famous fast-food chicken chain, whose Chick-fil-A Chicken Sandwich was a pioneer in the fast-food industry, offers several chicken breakfast items as well as the traditional eggs, bacon and sausage.

To make it easier to count calories, we’ve organized the Chick-fil-A Breakfast Menu by calories, from the little Fruit Cup to the big Breakfast Platters, and we’ve listed protein and carbohydrates below as well.

The breakfast story at Chick-fil-A began more than 30 years ago with the introduction of the Chick-fil-A Chicken Biscuit in 1986. The breakfast menu was revamped in 2004 to add several new items, and today breakfast lovers have all sorts of choices, especially if they like chicken.

What time does Chick-fil-A stop serving breakfast, you ask? Breakfast hours vary by location but Chick-fil-A breakfast time is usually between 6:30 and 10:30 a.m. Keep in mind that Chick-fil-A locations are all closed on Sundays.

Chick-fil-A’s Fruit Cup may not seem like much of a breakfast, since it only has 45 calories, 12g carbs and no protein, but it’s a nice start, especially for those who aren’t breakfast people. Most of us can at least agree to a bit of fruit.

For something more substantial, pair this with a protein-rich menu item for a balanced meal. In fact, the Fruit Cup would provide balance to anything on the menu. It’s a colorful blend of chilled mandarin orange segments, strawberries, blueberries and chunks of red and green apples for a sweet and refreshing taste.


I’d also recommend picking this up for a mid-morning or mid-afternoon snack.

First chicken for breakfast, and now cookies? At Chick-fil-A, you can cut calories without having to cut out the cookies, even for breakfast. The Greek Yogurt Parfait With Cookie Crumbles starts with vanilla Greek yogurt and adds fresh blueberries and sliced strawberries before being topped by chocolate cookie crumbs.

That mixture, and the 11g protein, just might curb your sweet tooth and help you avoid the mid-morning temptation at the vending machine.

Here’s another Chick-fil-A breakfast menu item for smaller appetites. The 220-calorie Sunflower Multigrain Bagel may or may not be your entire breakfast; it would pair nicely with either the fruit cup or parfait, but if you’re a toast-and-coffee person, this could be a nice change of pace.

The Sunflower Multigrain Bagel is served plain or with cream cheese. I prefer my toasted bagels topped with butter, but whatever you choose, you’ll want to include it in your calorie count. Chick-fil-A doesn’t seem to list its butter or cream cheese anywhere on its site, so I’d guess 50 calories or so.

You’ll get 6g protein from this bagel, but the carbs are up to 42g.

Granola is good for you, but it can be deceptively high in calories. Case in point, the Greek Yogurt Parfait With Granola, which at 230 calories has 20 more than the same breakfast menu item with cookie crumbles. It has more calories than cookies! That said, I’d much rather have granola in my yogurt than chocolate cookies.

Years ago a co-worker told me he stirs granola into peach yogurt, and I’ve been doing it ever since. I also like pecan bits in yogurt. As someone who isn’t very hungry in the morning, I would find the Greek Yogurt Parfait a refreshingly light breakfast offering that provides 12g protein.

Delicious and crunchy as these little nuggets are, Chick-fil-A’s Hash Browns are not packed with nutrition, but they’re also not too bad for you. The 270-calorie Hash Browns have only 2g protein and would be best as a happy little side, but maybe not with the Breakfast Platter. That would put you over 1,000 calories at the start of the day!

I’d be OK having these lovely morsels and the parfait with granola, as the protein from the yogurt would help jump-start the morning.

So do you think three tiny sandwiches would make you feel you’re getting more to eat than if you just had one larger sandwich? The Chick-n-Minis trio places little Chick-fil-A Nuggets on mini yeast rolls with a honey butter spread.

This sounds to me like a nice savory start to the day, with 15g protein and 29g carbs. I’d totally eat these in the car on the way to anywhere.

I take issue with the menu here, though; the calorie count does not include butter, but this buttermilk biscuit is not only pictured with butter, the name itself says it’s buttered. If you read up on the menu item, you’ll see the Buttered Biscuit can be served plain or lightly buttered. This boggles my mind. “I’ll have a Buttered Biscuit with butter, please.” Really?

If you want to load up on protein for 300 calories, go for the Egg White Grill, one of the most healthy fast food items on the breakfast menu. You’ll get a grilled chicken fillet, fluffy grilled egg whites and American cheese on an English muffin, and you’ll pack in 25g protein. If you’re counting saturated fat, you’re only consuming 3g of it with this breakfast.

Not everyone is in love with the Egg White Grill, whose addition to the breakfast menu in July 2016 bumped the Spicy Chicken Biscuit off the national menu.

If you like that trio of Chick-n-Minis, and you’ve got another 60 calories to spare, you can get a four-count pack for 360 calories. With four of those Chick-fil-A nuggets on mini yeast rolls with honey butter spread, you’ll move up to 19g protein and 39g carbs.

If you’re at Chick-fil-A and somehow don’t want chicken (but do want bacon), the Bacon, Egg & Cheese Biscuit may be for you. At 420 calories and 15g protein with 41g carbs, this is a hearty handful with crisp bacon, a fluffy folded egg and a slice of cheese on a flaky buttermilk biscuit.

I guess it’s OK with the Chick-fil-A cows to not eat chicken as long as we don’t eat beef.

A breakfast-sized version of Chick-fil-A’s famous boneless breast of chicken is seasoned, hand-breaded and pressure-cooked in refined peanut oil and served on a buttermilk biscuit. You’ll get 17g protein and 50g carbs.

The Chick-fil-A Spicy Chicken Biscuit, now off the national menu, is still available at select locations and has virtually the same nutrition numbers.

Chick-fil-A’s Breakfast Burrito With Chicken has among the best nutrition numbers on the breakfast menu. It’s a good all-around one-handed meal that’s easy to eat on a drive to work.

At 450 calories, you’ll get an impressive 30g protein with 34g carbs. The Breakfast Burrito is also one of the more complex menu offerings, featuring a scramble of eggs, onions and bell pepper with a blend of Monterey Jack and cheddar cheeses, wrapped up with chunks of chicken in a soft flour tortilla. It’s served with salsa for a spicy wake-up call.

Another good thing about the Breakfast Burrito is that it’s also available with sausage. The Breakfast Burrito With Sausage packs the same eggs, onions, bell pepper and cheese in a flour tortilla, with spicy salsa on the side. The only difference is savory nuggets of sausage instead of chicken.

I’m not much for bagels as sandwiches, especially when they’re stacked, because bagels can be so chewy, but since I’ve been toasting bagels instead of microwaving them, I’ve noticed the texture is so much lighter (and better!), so I’m willing to give the Chicken, Egg & Cheese Bagel a try.

I do like that these bagels are multigrain and have sunflower seeds. This “bagelwich” holds a breakfast-size portion of Chick-fil-A’s boneless breast of chicken with a folded egg and a slice of American cheese, and provides 27g protein and 51g carbs.

On the other hand, it does provide 5g more protein at 20g, so that may be justification to go for the sausage version. Everything else being equal, both sandwiches have 41g carbs.

And now we come to the big event, the Chick-fil-A Breakfast Platter. We begin with the bacon version, which is the lowest in calories at 770. Along with four strips of smoked Applewood bacon, you’ll dine on scrambled eggs and a fresh-baked buttermilk biscuit. White-pepper gravy with sausage will be served on the side.

All the numbers are big with this big breakfast dish, which delivers 35g protein and 59g carbs.

Since Chick-fil-A is well-known for its signature chicken, I’m guessing the Breakfast Platter that features chicken is the most popular. This hearty breakfast plate provides scrambled eggs, a breakfast portion of the Chick-fil-A boneless chicken breast and a fresh buttermilk biscuit, along with white-pepper gravy with sausage.

This Breakfast Platter has 42g protein, the highest of any of Chick-fil-A’s breakfasts. It also has the highest level of carbs at 67g, so maybe the pride over protein will even out the cringing over carbs.

In select cities, you can get the spicy chicken version, whose nutrition numbers are about the same.

Surprise, surprise: the sausage Breakfast Platter is tops on the list at 940 calories. The same fresh-baked biscuit and scrambled eggs accompany a grilled slice of pork sausage.

For me the coolest part of this breakfast is that it doubles up on the sausage, since you also have the white-pepper gravy with sausage, which for me is the greatest kind of gravy.

And while the calories and carbs (60g) are admittedly way up there, this Breakfast Platter has 38g protein.

The Chick-fil-A breakfast menu offers a decent variety of choices and lots of chances to start the day out with good protein. If you’re a vegetarian, though, the variety goes out the window when you’re selecting your morning meal at Chick-fil-A.

For a beverage, you can go with a cup of Chick-fil-A Coffee, a glass of cold-brewed Chick-fil-A Iced Coffee, or an individual-sized bottle of Simply Orange Juice.

Chick-fil-A Free Breakfast Could Be in Your Area

Last, but not least, I’ll leave you with this tidbit that may or may not be of use to you, depending on where you live. Chick-fil-A free breakfast is a regular promotion available at participating locations that offer free breakfast items for a limited time.

Several locations in the Houston, Texas, area offered rotating menu items in January 2017, for example. Restaurants in the Toledo, Ohio, area gave away free breakfast items in both February and March 2017. Customers got free three-count Chick-n-Minis in February and free Chick-fil-A Chicken Biscuits in March.

Of course, you’ll probably buy something to go with it; I’m guessing a free breakfast item anywhere is generally a win-win for the restaurant and the customer.

Previous post: FDD Talk 2017: What You Need to Know About the Play It Again Sports Franchise Opportunity (Financial Performance Analysis, Costs and Fees)

Next post: 28 Substantial Fees Every Wings Over Franchisee Needs to Know About