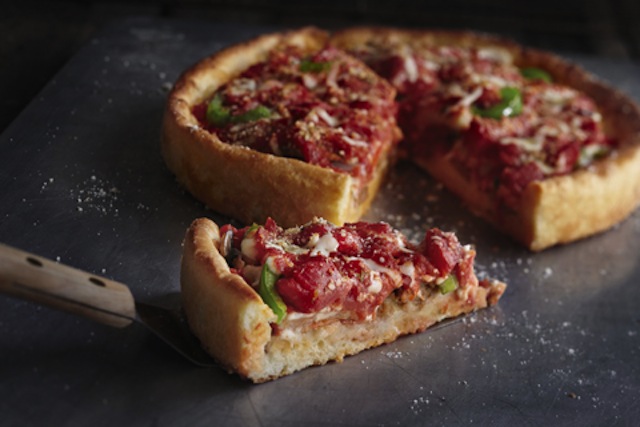 1.   In summer 2016, Uno Pizzeria & Grill had its largest new product launch in its history when the Chicago Thin Crust Pizza was added to the permanent menu.

2.  According to CEO and President Louie Psallidas, the thin crust pizza is “made with fresh house-made dough, the highest-quality ingredients, and over-the-top flavors and toppings.”

4.  Getting the recipe right for the thin crust pizza took two years of research and development.


6.  Also to keep the thin crust pizza unique to the Uno brand, the pizzas are sliced with a “Chicago-style cut” which means that the pizza is cut into squares.

9.  According to Uno, most customers cannot tell the difference between the gluten-free crust and the regular one.

10.  At the time of the launch of the gluten-free pizzas, Uno offered three flavors: cheese, pepperoni, and veggie. The restaurant just added a grilled chicken, goat cheese, and caramelized onion gluten-free pizza to the menu.

11.  After launching the Whole Hog Burger in March 2016, Uno Pizzeria & Grill came under fire when the high fat/high sodium burger made The Center for Science in the Public Interest’s (CSPI) 2016 Xteme Eating list.

12.  According to the CSPI, the Whole Hog Burger, which is made with hamburger, sausage, bacon, prosciutto, pepperoni, four types of cheese, garlic mayo, and pickles, and also comes with both fries and onion rings, has 2,850 calories, 62 grams of saturated fat, and 9,790 milligrams of sodium.

13.  In response to the CSPI, Uno said that the burger was created “to be an over-the-top eating experience that would capture the attention of our customers, taste great, and be a fun challenge to conquer.”

14.  Uno also stated that the company was not surprised that the Whole Hog Burger made the Xtreme Eating list and that the burger was made for that kind of publicity.

15.  After its launch, the Whole Hog Burger became a popular menu item; it is also the inspiration for the Whole Hog Thin Crust Pizza that was launched later in the year.

17.  Today, there are over 130 Uno locations across 21 states and internationally, in South Korea, the United Arab Emirates, Honduras, Kuwait, and Saudi Arabia.

18.  Uno Pizzeria & Grill has not ranked on Entrepreneur’s Franchise 500 list in the last decade. The last time the company appeared on the list was in 2006, when it ranked No. 252.

Next post: 27 Substantial Fees Every LearningRx Franchisee Needs to Know About