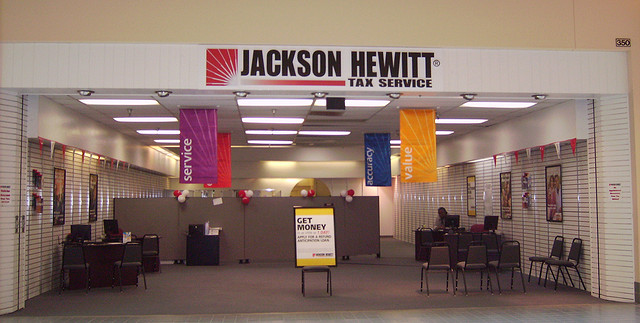 From Small Tax Service Company to Second Largest in America

Over the next few years, the company opened a few more locations in the area and started franchising in 1986, which was the same year that the IRS began experimenting with e-filing services. By the 1987 tax season, Jackson Hewitt had 22 locations.

A few years after franchising, Jackson Hewitt was contracted by department store chain Montgomery Ward to open offices in 169 locations throughout the U.S. The sudden growth was initially too much for Jackson Hewitt to handle and the company decided to close 67 locations to avoid filing for bankruptcy. However, by the end of 1990, the company had returned to profitability and opened additional Montgomery Ward locations.

Over the next few years, the company continued to expand and by the end of 1993, Jackson Hewitt had 900 locations across 37 states.

The following year, in 1994, the company went public although no new stock was offered; instead, the company’s 700 investors’ private shares were converted to public ones in an effort to boost the company’s profile and spur franchise sales. That same year, Jackson Hewitt began opening offices in Sam’s Club and Wal-Mart locations.

In 1996, John Hewitt left the company and Keith Alessi took over as CEO. Two years later, the company was acquired by Cedant Corporation, a consumer conglomerate, for $480 million. Under Cedant, the company aggressively pushed expansion, opening 1,000 new offices by the start of the 1999 tax season.


Despite doing well over the next decade, the company filed for bankruptcy in late May 2011. Earlier in the month, Jackson Hewitt ceased being traded on the New York Stock Exchange and by the summer, the company once again became privately held.

Today, Jackson Hewitt is privately held by Bayside Financial and the company has over 6,000 locations across the U.S.

Although David Prokupek has only been CEO of Jackson Hewitt for three years, he announced that he would be stepping down from his position in early 2017. Prokupek will stay on as co-CEO through this year’s tax season and then stay on as an investor and an advisor to the board of directors.

Alan D. Ferber will step in as the company’s CEO. Ferber previously served as President of ADT home security.

In late 2016, customers were able to pre-qualify for an Express Refund Advance worth between $200 and $1,300. The company says that the advance will help the millions of taxpayers who will experience a refund delay due to the new PATH Act, which states that the IRS may take longer to examine any refunds that contain Earned Income Tax Credit (EITC) and/or Additional Child Tax Credit (ACTC).

In early 2016, Jackson Hewitt announced that it was joining forces with American Express to offer services that would help people who either have no access or limited access to bank accounts. Those that are unbanked or underbanked often have to wait longer for tax refunds since these aren’t going through direct deposit.

Despite being a large franchise and the number two tax service company in the United States, Jackson Hewitt has only appeared on Entrepreneur’s Franchise 500 list twice in the last decade. Jackson Hewitt has not appeared on Entrepreneur’s list since 2008 when it ranked No. 21. The highest ranking the company has achieved in the last decade was No. 3 in 2007.