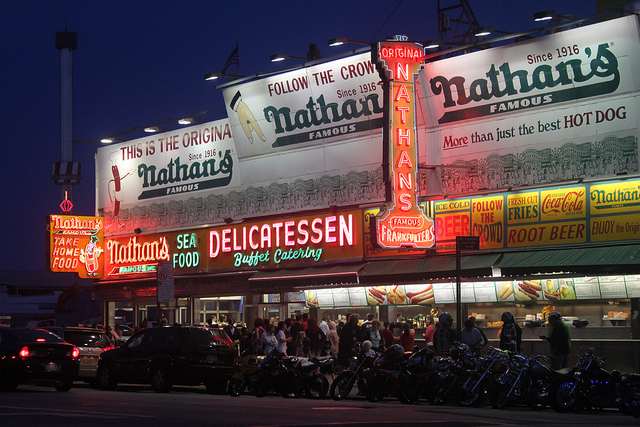 The first Nathan’s Famous location was a hot dog stand in Coney Island, New York, which was owned and operated by Nathan Handwerker, a Polish immigrant. Nathan’s hot dog stand was opened in 1916 and sold hot dogs based on a recipe developed by Handwerker’s wife, Ida. The hot dog stand was an almost instant success and the business thrived in the years that followed.

In 1987, the Handwerker family sold all Nathan’s locations to private investors and franchising officially began a year later in 1988.

Over the years, Nathan’s Famous has become a brand recognized around the world. Today, there are over 250 Nathan’s Famous locations across the globe. Additionally, Nathan’s hot dogs are sold in all 50 states and 10 countries at approximately 50,000 restaurants, stands, and grocery stores.

2016 marked the 100th anniversary of the first Nathan’s Famous location. To celebrate the occasion, Nathan’s held a year-long celebration. Throughout the year, special events were held.


In honor of the anniversary, the original Nathan’s Famous location, which is still open on Coney Island, sold 5-cent hot dogs for a few hours on May 28, 2016. The 5-cent deal was for two hot dogs and the order came with a commemorative certificate.

In September, the corner of Surf and Stillwell (where the original Nathan’s Famous location sits) on Coney Island was co-named Nathan and Ida Handwerker Way to honor the founders of Nathan’s Famous.

Nathan’s also used social media to celebrate with the brand’s fans and gave away several prizes including a trip to New York. The company also held a mobile food truck tour, which stopped in 20 cities and traveled across the U.S.

To end the year-long celebration, Nathan’s set a new Guinness World Record in early September. Nathan’s Famous now holds the record for the longest line of hot dogs with 1,916 hot dogs laid end to end. All of the hot dogs used for the record were given to the crowd after the event.

Despite the brand’s continued global success, at the end of the first quarter of 2016, Nathan’s reported in a Securities & Exchange Commission filing that the company had a “substantial” amount of debt along with declining stock prices. The company says that it owes $135 million to holders of notes that it sold in 2015 that are due in 2020. At the time of the report, Nathan’s stock market valuation was at $183 million.

In the “risk factors” section of the SEC filing, Nathan’s stated that the company “may not be able to generate sufficient cash to service the Notes or our other indebtedness, and may be forced to take other actions to satisfy our obligations under our indebtedness, which may not be successful.”

Although the restaurant arm of Nathan’s business isn’t doing well, its packaged foods business, which sells its hot dogs, sausages, and corned beef products in retail channels, generated $16.9 million in revenue for Nathan’s in fiscal 2016, up from $14.4 million in 2015.

Up and Down on Entrepreneur’s Franchise 500

In the last decade, Nathan’s Famous has almost always earned a spot on Entrepreneur’s annual Franchise 500 list. However, the company did not rank on the list for 2017. 2016’s rank at No. 493 was the lowest for Nathan’s. The company’s highest rank on Entrepreneur’s list was at No. 128 in 2011.