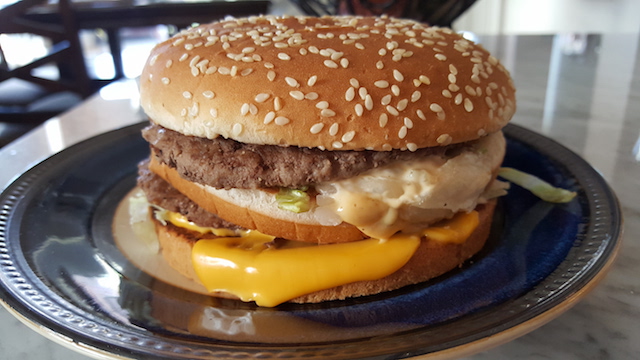 It’s actually a comforting thought, especially when you are away from home and longing for something familiar to chase away those home-sick blues. Those golden arches can be a beacon to many, practically reaching out to you and welcoming you home.

Thankfully, McDonald’s reputation for consistency doesn’t keep them from stretching their gastronomic wings. Sometimes those wings hit a home run, like with the all-day breakfast menu. But those wings can also hit a brick wall. Remember the McLean Deluxe? Don’t feel badly if you don’t. The McLean Deluxe, introduced in 1991 and loaded with seaweed extract, didn’t last very long.

The New Kid in Town

Fast forward to 2017 and the introduction of the Grand Mac…a bigger, better version of the all-time favorite, Big Mac. Who knew you could improve on the “two all beef patties, special sauce, lettuce, cheese, pickles, onion on a sesame seed bun?”

But don’t fret about the diminished size. The Grand Mac has come to the rescue. This big brother of the Big Mac comes in at 840 calories and is 1½ times as big as the smaller 540-calorie Big Mac.

If you are one of the 20% of millennials who has never tried a Big Mac, the calorie count on the jumbo version may scare you away from the Grand Mac, but you will be missing out on history.

For those who grew up craving this two-patty gem, this bigger version truly is better.

The original Big Mac is always a hit for McDonald’s lovers. Add to that a large order of fries and a Coke, and you are in fast food heaven. But since the burger has shrunk over the years, that last bite leaves many wanting just a little bit more.

This is what makes the Grand Mac so perfect. It’s the same Big Mac many of us have grown up eagerly scarfing down when that burger craving calls our name. The difference is…the bread and meat are bigger…much bigger.

You can actually bite into the Grand Mac and feel your teeth sink into the two pieces of meat. The original Big Mac, which we still love, sometimes leaves us wondering where the meat is. Not so with the Grand Mac. The two patties on this baby come in at 1/3 of a pound before cooking. Now we’re talking!

The burger still has the three pieces of bread and two slices of cheese to help form its double-decker architecture, but McDonald’s has upped the special sauce quite a bit.

Devoted Big Mac lovers around the world know that you don’t start eating one of these burgers without a big handful of napkins. Why you might ask? Because things are going to get messy quick, in an oh-so-delicious way.

Just imagine the mess created when eating the Big Mac. Now multiply that by five. The delicious secret sauce, which most McDonald’s fans speculate is really just Thousand Island dressing, is doled out very generously on the Grand Mac. This can lead to sauce running down the sides of your mouth, onto your shirt or into your lap if you aren’t quick with the napkin placement.

And this burger is not for those dainty souls who don’t like barbeque ribs because they are too messy or who insist on eating pizza with a fork. Nope! Those light weights might want to sit this one out. It is not for rookies.

Improvements on the Original

One of the bonuses to the bigger meat and buns is that the burger stays together much better while you’re eating it, unlike a regular Big Mac that slips and slides all over the place.

Don’t get me wrong, it’s still delicious either way, but you could probably get away with eating a Grand Mac in the car…one hand on the steering wheel and one hand on the burger. Anyone who has eaten an original Big Mac wouldn’t even attempt that maneuver. Just the idea of trying it makes grown men quiver in fear while reliving at least one horrible experience where they wore more of the Big Mac than they actually got to eat.

The Grand Mac won’t let you down in this way, although a big handful of napkins is still in order…it is still a Big Mac after all.

So is this newest addition to the McDonald’s menu destined to be a hit or a miss? Time will tell, but after stuffing the monster down during one of my latest lunches, I can say with confidence, it has a great shot at longevity. It’s what a real Big Mac should have always been.

However, there are two drawbacks I can see with the Big Brother to the Big Mac. The first drawback may be the price. At over $8 for the Grand Mac meal with a large order of fries and a large drink, some may opt to stick to the dollar menu instead.

The second drawback may be the high calorie count. But if you are that worried about calories, would you even be eating a burger at McDonald’s in the first place? Come on…we all know what we are getting there isn’t diet health food. It’s junk food. Call it what it is and embrace the fact that most of us can’t live on lettuce and low fat dressing our whole lives. We have to have a burger every now and then. It’s just that simple.

So to all those vegans out there…we salute you and cheer you on from the sidelines as we hold our Grand Macs in one hand and our hot, fresh McDonald’s fries in the other. Just remember, after you finish making your kale, carrot, and beet smoothie, bring extra napkins for us, please. We’re going to need them.