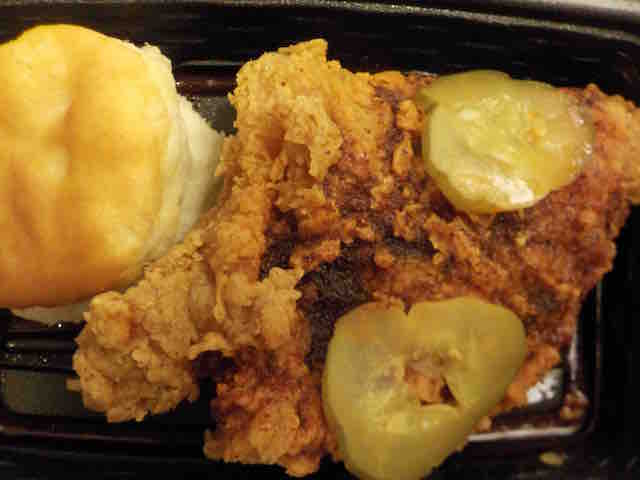 Kentucky Fried Chicken’s roots go way back. The company’s founder, Harlan Sanders, was born in 1890! Because his father died when he was only five and his mother had to work in a canning plant, Sanders was running the household at a very early age, caring for his two younger siblings and even doing much of the cooking by age seven using recipes his mother taught him.

It wasn’t until 1930 when Sanders found himself operating a Shell gas station in North Corbin, Kentucky, and started preparing food, including fried chicken, to sell to travelers. After four years, he was able to buy the larger station across the street and expand the number of tables and people he could serve. By 1936, his operation was so well known that the state’s governor, Ruby Laffoon, bestowed on Sanders the honorary title of Kentucky Colonel.


In 1937, he expanded his restaurant and bought a nearby motel, calling the whole operation the Sanders Court & Café. Things were going well, but he was unhappy that it took 35 minutes to pan-fry his chicken – not exactly “fast” food yet. He refused to go with deep frying because he believed it lowered the quality of the chicken. In 1939, he solved this problem when commercial pressure cookers became available and he modified them into pressure fryers, which he thought achieved the speed of deep-frying while keeping the quality of pan-frying.

It also wasn’t until 1940 that he finally settled on his secret “11 herbs and spices” original chicken recipe. In the 1950s, he started dressing and acting the part of Colonel Sanders, which caught on quickly both inside and outside his business. He started franchising the concept in 1952 with the name Kentucky Fried Chicken, which marked the first major entry of a chicken restaurant into the realm of franchising to provide an alternative to all the burger joints. By 1963, there were already more than 600 KFC locations.

Sanders realized he was overwhelmed by this rapid expansion and so in 1964, he sold the company to a group of investors for $2 million, with the caveat that he would remain the company’s quality controller and trademark, receiving a lifetime salary. By 1980, when Sanders passed away, firmly entrenched in America’s cultural history, there were nearly 6,000 KFC locations in 48 countries.

Menu innovation at KFC, like any gigantic fast food chain, is a surprisingly hit-or-miss undertaking. And KFC hasn’t tinkered much with its core chicken products. The new item I’m going to review today is the fourth chicken flavor on KFC’s menu. That’s pretty amazing when you think about how many different items there are at your typical burger joint.


The crazy pieces-of-chicken-serving-as-bun Double Down sandwich was beloved by many and despised by others as somehow excessive (when it was really just two pieces of chicken, bacon, and cheese – what’s wrong with that?). KFC’s recent Chizza concept (a little pizza where the crust is, you guessed it, a piece of chicken), might best remain confined to its current locations in the Philippines.

Today I want to take a closer look at one of KFC’s new menu items: Nashville Hot Chicken. Given her aversion to spicy food, I didn’t take my daughter with me this time, so the opinions expressed below are all mine. Here’s how Nashville Hot Chicken stacks up along seven dimensions:

KFC’s chief marketing officer, Kevin Hochman, thinks this is the biggest spicy chicken innovation since Buffalo wings. Whenever company people start throwing around descriptors like “biggest innovation,” I take it with a grain of salt.

Given that it’s only KFC’s fourth flavor in its core chicken products, sure it’s a big deal for the chain. But it’s not that big a deal for consumers. Some in Nashville don’t seem to like their local dish becoming a KFC menu item, but there hasn’t been too much of an outcry.


Since I’ve never had actual Nashville hot chicken as served in Tennessee, I can’t speak to the authenticity of KFC’s version, but so far it seems to be well received. I give it a thumbs even.

I ordered the extra-crispy, bone-in, single-piece chicken breast basket that came with a biscuit, cole slaw, and two pickle slices on top of the chicken. You can also get this basket as a two-piece (drumstick and thigh) basket, a three-piece chicken tenders (boneless) basket, or as a Chicken Littles sandwich.

The chicken breast itself was a good size – not huge but not puny either. I give this aspect a thumbs even.

This meal had a price of $5.49, which seemed a bit steep at first when I think about how much food that same price could buy at other non-chicken chains. But when you add in the biscuit and cole slaw, it’s actually a decent amount of food. Although I still had the feeling I could have gotten more food at any number of other chains for the same amount of money, this aspect gets a thumbs even.

Nashville Hot Chicken comes out with more reddish color than KFC’s other chicken products thanks to the blend of spicy cayenne and smoked paprika. For the people who are fans of super-spicy chicken, the heat of Nashville Hot will certainly seem lacking, while those who have an aversion to spicy food will probably find it close to being too spicy.

It’s the kind of heat that builds up as you go along, so when you first start out, it doesn’t seem spicy, but towards the end of your meal, you’ll feel it for sure.

The saving grace, however, is the cole slaw. If you feel like the heat is too much, a bit of the surprisingly delicious cole slaw (which is just a tiny bit sweeter than cole slaw should be) cools things down nicely. And the equally delicious biscuit can serve the same role as well. The level of heat, in the end, is just right for a mass-consumption American audience.

The outer breading stayed crispy even after sitting through my photo shoot of the item. The pickles, by the way, are a nod to how Nashville hot chicken is served in Tennessee, and the tangy sour pickles do offer a great flavor contrast to the spicy, ever-so-slightly-sweet chicken.

It just so happens that I’ve been experimenting at home with preparing whole chickens in a slow cooker, which led me to discover smoked paprika. I love smoked paprika, so I was pleasantly surprised to find it featured in Nashville Hot Chicken.

I’m also a sucker for just about anything that can be described as savory, and this definitely qualifies. In short, it works – thumbs up!

I guess there’s no way around it – eating greasy fried chicken is a messy business, and make no mistake, the Nashville Hot Chicken offering is pretty heavy on the grease (which pickles help to cut, but there would need to be more of them to really make a dent in the grease).

You can try to attack it with a fork, but will inevitably find it difficult to get to all the meat, which means you do eventually have to just pick it up with your fingers and gnaw at it. Hence the long-time KFC marketing slogan – “Finger-Lickin’ Good!”

I’m not a neat freak, so this aspect didn’t bother me too much. I just knew I’d have to wash my hands before sitting down at the old laptop to write this up, so I give this another thumbs even.

This is the same co-branded KFC/Taco Bell I visited for my review of Double Stacked Tacos. As with my previous visit, the service was neither especially good nor especially bad, so this gets a solid thumbs even.

This one is interesting because last time, I noted that when I was walking in for Taco Bell, I found the overwhelming smell of KFC a turn-off. This time I was walking in for KFC, so the KFC smell was fine, and actually made my mouth start watering. But the venue itself is still overly cramped and overly lit and just not a pleasant place to enjoy a meal.

KFC spent 10 months in a whirlwind of development and testing to get to its final Nashville Hot Chicken recipe. That may sound like ages to many people, but for a chain of this size, it’s more like the speed of light. And by all accounts, they got it right.

In the final analysis, I gave KFC’s Nashville Hot Chicken 1 thumbs up, and 6 thumbs even, which in my book means an overall thumbs up, even though it’s just barely above thumbs even. Okay, KFC, you managed to come up with something that’s actually pretty darn good. Keep up the good work!


👍"Your website and you have been instrumental in finding this franchise opportunity and I am overwhelmingly grateful." (David F., subscriber)