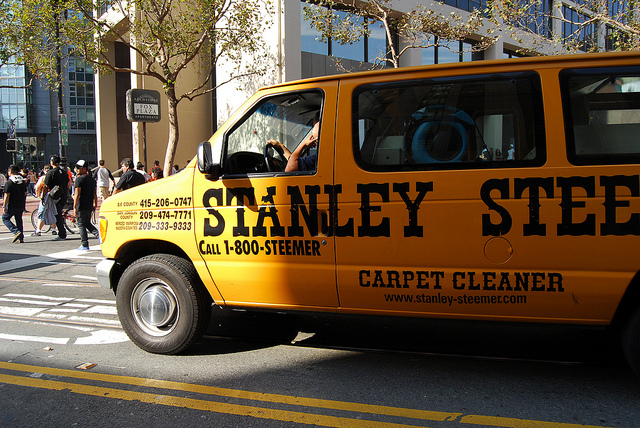 Stanley Steemer is a home cleaning chain that has been around for a long time – since 1947 when it was founded by Jack A. Bates with a total investment of only $2,300. It wasn’t until 1972 that the company began franchising its concept. Over the years, this third-generation family-owned business has expanded its service offerings from carpet cleaning to include a wide range of home cleaning services.

The number of locations has declined in recent years from a high of around 300 back in 2009 to the current 274, 65 of which are company-owned.

With the motto “We’re Stanley Steemer. We wrote the book on clean,” Stanley Steemer’s recognizable yellow vans are chock full of the latest cleaning equipment manufactured by the company and operated by highly-trained technicians.

Based in Dublin, Ohio, here’s how Stanley Steemer keeps things spic and span in the competitive residential and commercial cleaning industry:

Stanley Steemer is the biggest carpet-cleaning company in the country, and it got there by sticking to the following set of principles: Consistent, quality experiences with guaranteed customer satisfaction; responsive and reputable service available 24/7; superior equipment; highly-trained technicians who are professionally screened and never subcontracted; and geographic scope that reaches 95% of the U.S. population.

For a number of years now, the company has sponsored the 30-Lap Stanley Steemer NASCAR Late Model race typically held in April at the Rockford Speedway in Rockford, IL. This year, driver Michael Bilderback won the race.


The Power of Steam

The company’s method is its own hot water extraction method, otherwise known as steam cleaning. Using soft hot water and its own cleaning solution, powerful suction lifts the water along with the dirt out from deep within carpet fibers, removing 95% of the moisture so carpets can dry within 8-24 hours.

While some have noted that their carpets seem to counter-intuitively soil faster after a cleaning, Stanley Steemer notes this is due to residues left behind after some methods that attract dirt, but the company’s special formula leaves behind little if any residue.

Customers also have the option of having Stanley Steamer’s specially formulated protector that will help keep carpets cleaner longer by wrapping each fiber with a protective coating. This kind of protector wears out over the course of a year and should be refreshed annually.

Stanley Steemer’s quotes might seem high relative to competitors, but customers should note that each quote includes treating spots and stains, moving furniture as needed, and a 10-day satisfaction policy with no hidden fees or charges.