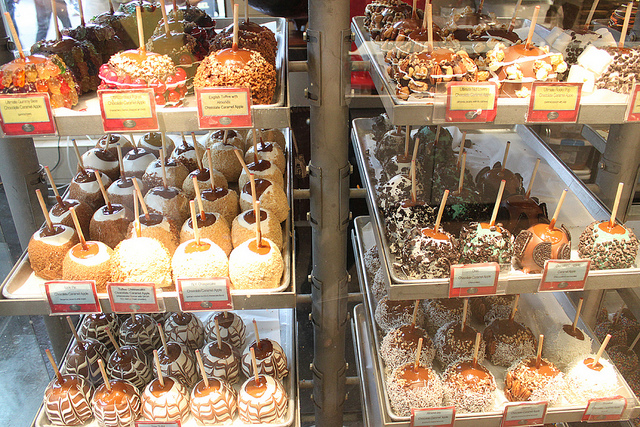 Rocky Mountain Chocolate Factory is one of those stores that can show up just about anywhere, from a street-front location to an airport kiosk, because of the flexibility of the stores’ footprints.

With locations around the world, the brand’s kiosk, in-line and full-store footprints can be found along sidewalks, in shopping centers, in resorts and in airport terminals, offering the temptation of sweet treats to children and adults alike.

The company is based in Durango, Colorado, where chocolates and confections are handmade in its 52,000-square-foot factory and delivered via its refrigerated trucks.

Rocky Mountain Chocolate Factory creates about 300 types of chocolates and other candies, from basics such as fudge and fine boxed chocolates to seasonal treats for holidays and other special occasions.

The company’s signature candy is the Bear, a paw-sized treat made of caramel, roasted nuts and chocolate. Also popular are butter creams, nut clusters, truffles and toffee, as well as a king-sized peanut butter cup called the Bucket. The company also now sells sugar-free and no-sugar added candies.


Whether for immediate consumption or to be packaged in decorative boxes, bags and tins, these treats are designed to make people happy, which is the company’s tagline:  “Making people happy since 1981.”

Customers Can Watch Candy Being Made

The company was founded in 1981 by Frank Crail, who had recently moved to Durango with his wife to start their family. Deciding there was a need for a chocolate shop in Durango, Crail borrowed $50,000 to start the business, partnering with two investors who later left the company. He’s still the company CEO.

Rocky Mountain Chocolate Factory was ranked No. 369 on Entrepreneur’s Franchise 500 list for 2016. It’s the lowest ranking for the company, which has been dropping each year since achieving a high of No. 135 in 2010.

Current markets are in Canada, Japan, the Republic of Korea, United Arab Emirates, the Kingdom of Saudi Arabia, and the Philippines.

Next post: 32 Substantial Fees Every Planet Fitness Franchisee Needs to Know About