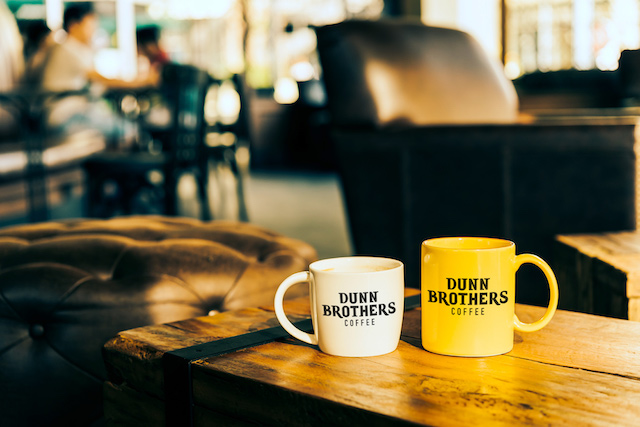 Ed and Dan Dunn were a couple of brothers who were obsessively focused on getting peak flavor out of coffee. Together they started their own coffee shop they called The Official Home of Taste in St. Paul, MN in 1987.

In 1994, Chris Eilers and Skip Fay were the first franchisees of the company. Four years later, in 1998, Eilers and Fay took over the franchise operation themselves.

From 2008 to 2013, the number of locations declined from a high of 96 down to 78. In recent years that figure has ticked back up slightly and currently stands at 84, four of which are company-owned.

The key to peak flavor in any coffee is roasting the beans, which at Dunn Brothers Coffee shops happens on a daily basis. If your beans are roasted off-site and have to travel, the flavor is inevitably compromised to some degree. Roasting on-site guarantees flavor and freshness. You can’t sell coffee weeks after roasting and expect it to have the kind of flavor it should have.

That’s why the big national operations can’t hold a candle to real flavor. Roasting in small batches is the way to go – batches of 7 pounds each that must be sold within 5 days of roasting for maximum aroma and taste.


When you know where your beans come from and how they were grown, you can figure out the best roasting profile for each kind of bean that results in the best flavor. Roasting sets off processes in the coffee bean that release coffee oils that contain all the aroma and flavor. But they also start to oxidize right away as well, which is why using the beans as soon after roasting as possible is so important.

This commitment to flavor and freshness has paid off – Dunn Brothers Coffee has been voted best cup of coffee in the Twin Cities more than ten times.

Coffee is coffee, right? Not so! In their pursuit of flavor, Dunn Brothers began to experiment with cold-pressed coffee, meaning brewing without hot water. Steeping the freshly roasted beans in cold water for 24 hours produces an absolutely amazing cup of coffee – more buzz, incredibly smooth, and with 60% less acid than hot-brewed coffee.

Ensuring the best flavor also means sticking to some strict post-roasting protocols: No automatic coffee machines; waiting to grind coffee until the milk is already steamed and ready to go in order to lock the flavor in rather than letting it escape as aroma; and making sure brewed coffee is served within 90 minutes, after which time a fresh pot is brewed.

But of course great coffee begins with the farmers who grow it, and Dunn Brothers believes strongly in making sure coffee farmers are adequately rewarded for their efforts while also protecting the environment and enriching communities.

Previous post: How Much Is a Checkers/Rally's Franchise? (Detailed Franchise Costs)