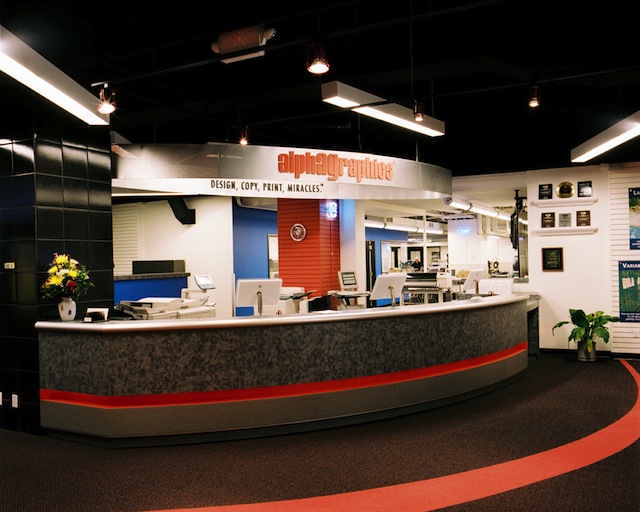 Dreams of a Visionary

Rodger Ford founded AlphaGraphics in 1970 in Tucson, Arizona. Ford was an entrepreneur and inventor who wanted to create a business center that provided customers with up-to-date visual communications technology. From his initial location, the company grew slowly and began franchising in 1979. By 1984, AlphaGraphics became the first desktop publishing retailer. Ford pushed the company toward global expansion and by the end of the 80s, AlphaGraphics became the first U.S. printing franchise to expand internationally.

In 2001, the Pindar Group purchased the company. They moved AlphaGraphics’ headquarters to Salt Lake City, Utah and continued to run the company for over a decade. In 2012, Pindar went bankrupt and AlphaGraphics was sold to Blackstreet Capital.

AlphaGraphics has undergone a fairly recent leadership shakeup; in 2014, Art Coley, Jr. resigned as president and CEO of the company. Coley had been with AlphaGraphics for seven years. Gay Burke, executive chairman of the board, stepped in as interim president while they searched for a replacement. Finally, in February 2015, Aaron Grohs was appointed as the new president.

AlphaGraphics offers an online ordering system called AG Online. It’s a streamlined service that makes ordering efficient and easy for customers. Some of the options available when you create an online account are ordering through your unique catalog, creating multiple-user permissions to allow users from different locations to order what they need, shopping with credit or debit cards in a secure ordering environment, storing your most-used documents and files for fast and efficient reorders, and having finished projects shipped directly to your location.

By using AG Online, customers have complete control over the whole process. Each customer is able to load up a unique catalog. The catalog will store online versions of the customer’s documents, making it easy to reorder the things they need. Some of the most common documents are letterheads, envelopes, brochures, catalogs, and postcards.

Looking Toward the Future

In August of 2016, AlphaGraphics held their annual conference where company executives discussed new ideas for the future of the company with their franchisees. During the conference president Grohs said, “As a world-class franchise, we are committed to strengthening our relationships, investing in innovative technologies, delivering comprehensive training, furthering our product and industry leadership, and ultimately, focusing on achieving operational excellence.”

AlphaGraphics has invested in new technology and products that will help franchisees increase sales and improve operations. Some of the changes include enhancing their online ordering system and making it even easier to use than before. They have also implemented PrintSmith Vision, a print management solution that automates key elements in printing workflow, forming the backbone of franchise operations.

Grohs believes that their commitment to continuous training and investments in new technology will drive the company toward continued growth.

Highs and Lows on Entrepreneur’s Franchise 500

Overall, AlphaGraphics tends to rank in the lower half of Entrepreneur’s annual Franchise 500 list. In 2016, AlphaGraphics earned their lowest spot, landing at No. 444. This is a pretty large fall from their 2015 rank of No. 296. Alphagraphics achieved their highest position in 2012 at spot No. 129.