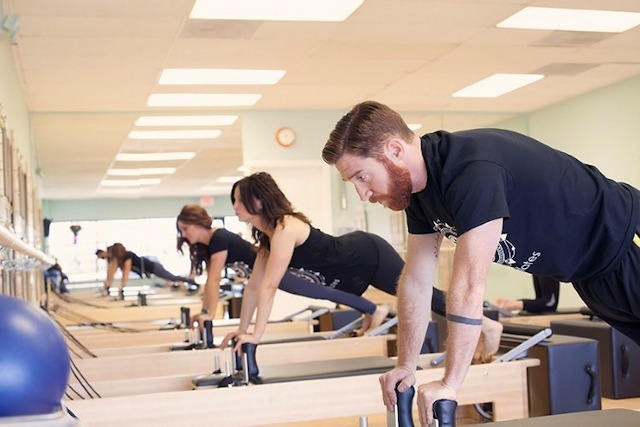 Allison Beardsley grew up poor and it wasn’t until 2002 when she discovered and fell in love with Pilates, the fitness workout that is similar to yoga but makes use of specialized equipment to really focus on your core, lower back, obliques, thighs, butt, etc., in a way that develops strength, flexibility, muscular endurance, coordination, balance, posture, and mental awareness. In fact, she never took a class that actually used the Pilates equipment because she couldn’t afford it.

When she eventually started Club Pilates, you can bet she had an eye on making sure classes were kept affordable – she’s on a mission to bring Pilates to everyone, not just to the elite.

After completing her instructor training, she began offering classes in the duplex she rented in San Diego in 2007. When she quickly outgrew that, she started renting a small studio down the street, just 900 square feet. Then came the Great Recession, which saw several neighboring businesses close, so she rented out their spaces as well and was soon running a busy studio of 3,000 square feet.

How did she grow during the economic downturn? She came up with a business model that could work for just about anyone. Some classes can be had for as little as $10 per session – way below the industry average – so no one had to give it up because of affordability.

Since franchising began in 2012, the number of locations has grown to 55, four of which are company-owned and one of which is located outside the U.S. Here’s how Club Pilates keeps people coming back for the health of it:

Everyone knows that a lot of businesses that signed up for Groupon couldn’t handle the massive demand, leaving customers frustrated and turned off. Not so with Club Pilates. Just one of their Groupon deals attracted 1,400 new customers – and the chain generally has customer retention rates of 80%, so you do the math.


A new location in Cherry Creek, Colorado used Groupon to publicize their grand opening. 85% of their initial client base came from Groupon, with a 99% retention rate.

Beardsley has been adamant from the beginning that Club Pilates is for anyone and everyone, no matter what your body type or what your fitness goals. As such, one important component of success is the class instructors who need to be enthusiastic and effective for everyone. And the better they do, the more they get paid.

In 2015, Beardsley sold Club Pilates to Anthony Geisler, who had previously run LA Boxing. Although Geisler is now the CEO, Beardsley retains a 25% ownership interest and will continue to be involved in the company.

Geisler is particularly excited to now be involved in Club Pilates because of the potential to grow a global brand. Pilates as a segment is very fragmented, and often very expensive. By keeping classes affordable, Club Pilates is already the leading brand for Pilates. His goal is to keep opening a new location every week for the foreseeable future.