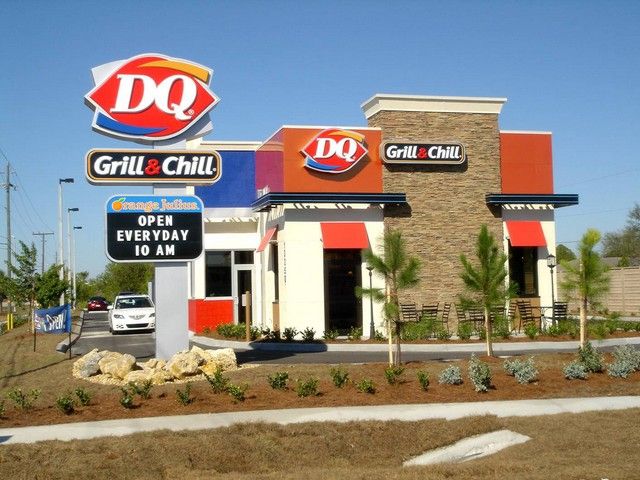 Dairy Queen may be the home of soft-serve ice cream treats, but it’s well-established as a place to sit down and eat a meal as well, with offerings from burgers to chicken at DQ Grill and Chill locations.

‘Grill’ and ‘Chill’ Sections in Kitchen

Most DQ Grill and Chill restaurants are free-standing buildings, but some are found in dual-use buildings, end caps of strip malls, on streetfront locations and in other venues.

From Burgers to Blizzards

Dairy Queen celebrated 75 years in 2015. The first DQ was opened in 1940 in Joliet, Illinois, but the soft-serve ice cream treat was first served in 1938 in Sherb Noble’s ice cream store in Kankakee, Illinois. John Fremont “Grandpa” McCullough and his son, Alex, had developed the recipe and asked Noble to sell the treat. It was so popular that the three men went into business together.

DQ, now owned by International Dairy Queen and franchised in the U.S. by American Dairy Queen Corporation, is based in Edina, Minnesota, a suburb of Minneapolis. ADQ is part of the Berkshire Hathaway family of companies led by well-known investor Warren Buffett.

The chain expanded its reach in the Middle East in April with a multi-unit agreement that will bring a minimum of 10 Grill and Chill and DQ Treat restaurants to Jordan within the next five years of the long-term agreement. These will be the first Dairy Queens in Jordan.

Also in April, Dairy Queen announced a multi-unit agreement to bring the chain to Poland. Twenty-six locations are planned in the first five years of the agreement. The chain, which has not been in Europe for two decades, is strategically planning development in Western Europe.